This week has been relatively calm in terms of progress on the project . . . that is, since Category 5 Pre-Shortzian Puzzle Project Hurricane Mark swept through!  Mark Diehl sent 61 proofread puzzles Saturday night and requested six more months' worth, which was a thrilling after-the-flood event!  Thanks so much, Mark, and keep up the great work, everyone—I'm looking forward to receiving more litzed and proofread puzzles this coming week as we make our way through the dog days of August!

In other news, litzer extraordinaire/programming whiz Ralph Bunker created a new section of his runtpuz.org Web site for the pre-Shortzian puzzles!  He plans to create an animation of himself solving a new pre-Shortzian puzzle a day, an ambitious goal that he feels will ultimately make him a better solver.  For those of you interested in solving or immersing yourselves further in the pre-Shortzian puzzles, following Ralph's regimen by solving the same puzzles he does could be a great way to get exposed to them on a regular basis.  Ralph makes following in his footsteps especially convenient by providing a direct link to the XWord Info page where each pre-Shortzian puzzle he works on can be solved!  The animations themselves are pretty nifty—they show exactly how long Ralph spent staring at each clue before entering the correct (or incorrect) answer; his personal comments about particularly interesting clues; and, ultimately, the duration of time he spent wrestling with each puzzle.  I think Ralph's "stare-time" is the most insightful feature of his animations—it can be a excellent indicator of whether a particular clue was appropriately written for its target difficulty level.  For example, a clue that didn't cause Ralph to skip a beat in a Saturday puzzle may have been too straightforward; on the flip side, a clue that flummoxed him for more than a minute in a Monday puzzle may have been inappropriately challenging.  It would be interesting to crunch these numbers and try to break down the true transparency of individual crossword clues rather than rely on approximations in existing clue databases and past puzzles.  To access Ralph's animations, follow this link and click on "Solution animations from the Pre-Shortzian epoch."  The "Fast forward" button makes Ralph's solve appear in a video-like format, and the other three main buttons allow you to sort the entries in different ways.  Thanks for breathing some new life into these puzzles, Ralph!

Now that I'm nearly finished reviewing packets of litzed puzzles from the early '60s, I've had some time to assemble my thoughts on how puzzles changed during this tumultuous decade.  The biggest observation I've made is that, not surprisingly, many fewer themed puzzles were published during the early '60s.  I've come to believe that 1961 was the pivotal year for Sunday puzzles in terms of themes—almost all the Sunday puzzles I've seen from more recent years have had themes, and nearly all the ones I've seen earlier than mid-1961 have been themeless.  One thing that surprises me is that themeless puzzles of the early '60s seem, on a whole, to be smoother and more ambitious than those in the late Farrar, Weng, and even Maleska eras!  Although most early '60s themelesses still had 74 or more words, I've started seeing an increasing number of themelesses that have 70-, 68-, or even 66-words.  In the Sunday department, I've seen some wonderfully open grids with seas of white in their centers or sparkly stacks of 9-, 10-, and 11-letter entries in their corners that had the same quantity of sub-par fill as their wordier counterparts!  These trends seem to hold and even become more prevalent in the few packets of '50s puzzles I've reviewed.  What could explain this apparent decline in smoothness and ambitiousness of themeless puzzles?  One theory I came up with is that after themes really caught on, constructors became so accustomed to filling grids with higher word counts that they fell out of practice working with more open ones.  Hand-constructing a puzzle with, say, a simple repeated word theme in a 78-word grid is much easier than trying to pack lively entries into a highly ambitious grid; perhaps many constructors no longer saw the point of filling fresh, open themeless grids when themed puzzles were just as easy (if not easier) to market.  Another possible explanation is that the generation of '50s constructors was simply phased out by an influx of newcomers who wanted to experiment more with themes.  Either way, I find this fascinating, and I look forward to seeing what other trends surface as I continue to review packets from earlier on!

This week's featured puzzle (whose constructor is unknown) was published May 30, 1961; edited by Margaret Farrar; and litzed by Mark Diehl.  The 68-worder is one of numerous early '60s themelesses that have made me think, "How did the constructor build this by hand?"  The first thing I noticed was its wide-open corners:  The constructor stacked three 10-letter entries (which was rather unusual for a pre-Shortzian puzzle) and even went so far as to cross it with a second triple-stack of 8- and 9-letter entries (something I've never seen in a pre-Shortzian puzzle!).  Then I noticed the lovely swath of 6- and 7-letter entries that cross each stack on the other side.  When I was done admiring these parts of the grid, my eyes traveled to the upper right and lower left corners, which stand out as being almost inelegantly closed-off and easy to fill.  For some inexplicable reason, these corners remind me of the unnaturally delicate arms of the otherwise mighty Tyrannosaurus rex.  In any case, the grid has an incredibly smooth fill for its time—I especially like how this puzzle screams 1961 by including PEACE CORPS (clued as "Subject of a recent Executive Order.") and ATOMIC AGE ("It began in 1945.") in the upper left alone!  Other entries I really appreciated seeing were PTOLEMY, EXTROVERTS, CONCERTINA, the quaint BETWIXT, STALWARTS, and MINIATURE.  That's a lot of zing for a 68-word grid!  I also appreciated that this puzzle taught me some awesome-sounding new words and terms, such as PISIFORM ("Resembling peas in size and shape."), STORIATION ("Ornamentation with designs of historical scenes."), SIDERAL ("Relating to the stars: Rare."), and SWEET SAINT ("Richard III's appellation for Lady Anne.").  Even the clues seem to sparkle, from the then-current ones for ISRAEL and ADLAI ("13-year-old republic." and "First name at the U. N.," respectively) to the extra-effort ones for SNOB and BABEL ("Word that originally meant a 'commoner.'" and "Site of a tower 'whose top may reach unto heaven.'," respectively).  What's even more impressive about this puzzle is that there's hardly any shorter junk—it's pretty much limited to LAWD ("De ___, character in Green Pastures."), RASC ("Service Corps of the British Army: Abbr."), RATAL ("Amount on which taxes are assessed."), and a smattering of less-common foreign terms (such as PASSY, BANDERA, and DROLES).  In all, this puzzle is truly remarkable for its time!  I've pasted the solution grid below. 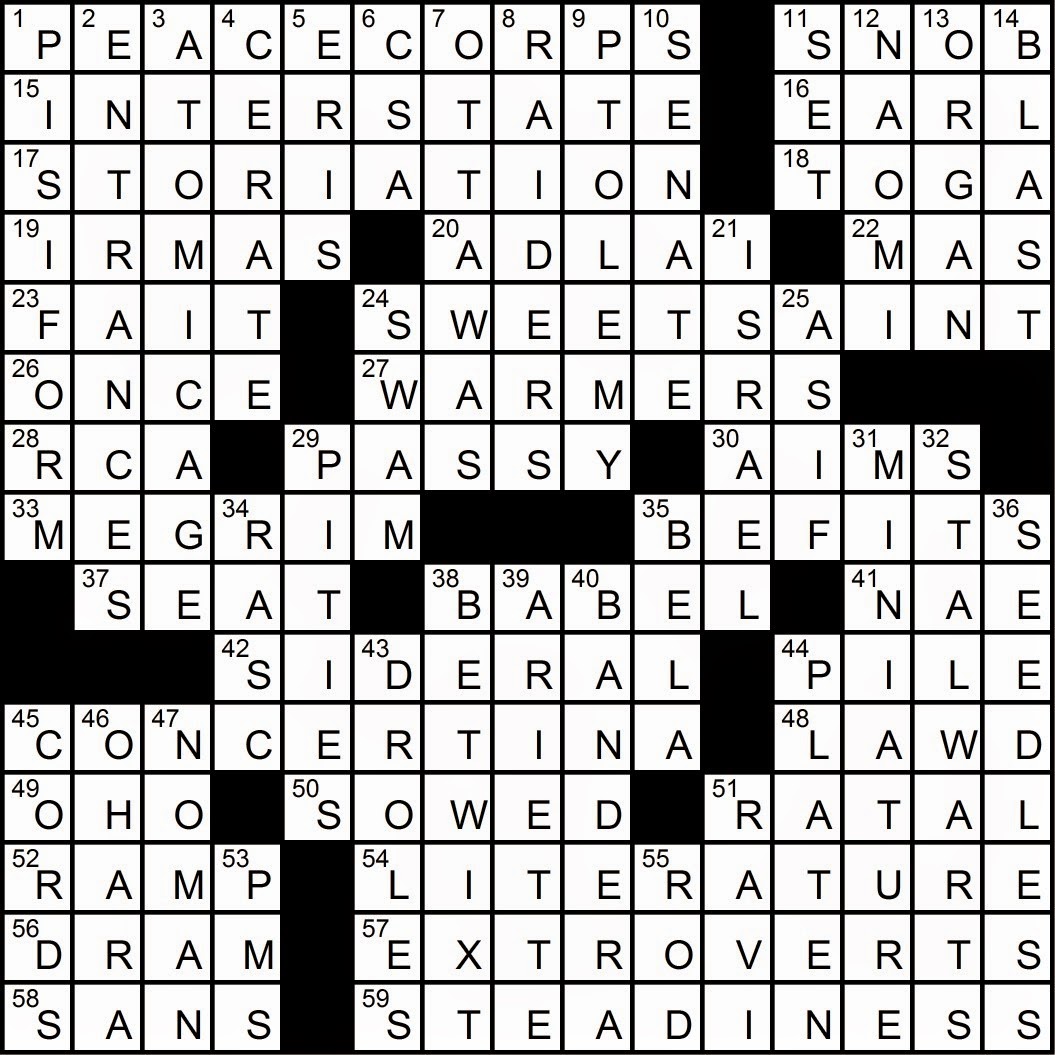 To close off today's post, here are some funny typos that our proofreaders have diligently caught and recorded:
Proofreader Todd Gross thought the last funny typo was particularly amusing; as he put it, "I'm imagining a frustrated golfer throwing their club into a sand trap (not hard to imagine, actually)."  Here's a picture of a golf club that's definitely seen better days:

Posted by David Steinberg at 3:38 PM