We've made great progress this week!  On Saturday afternoon an anonymous proofreader sent in 6 puzzles with 10 mistakes, then early Sunday morning Todd Gross sent 11 more with 21 mistakes, and a few hours later, Denny Baker sent another 31 puzzles—thanks so much, everyone!  To top it all off, the proofread 1965 puzzles were sent to Jim Horne at XWord Info earlier today and should be posted soon—thanks again, Jim!  As I've mentioned, the 1965 puzzles had numerous issues in September and October because of the New York newspaper strike; all told, 13 puzzles are missing from that year.  I hope to find them eventually in another paper that wasn't affected by the strike.

On Tuesday at 7:03 p.m. Howard Barkin was the first to send in the correct solution to last week's Blast! challenge—congratulations, Howard!  The clue from this July 23, 1958, puzzle was, "Subject for a contemporary scientist."  The answer:  THERMODYNAMICS.  I remember studying thermodynamics in my physics class last year, but that unit definitely wasn't in the "modern physics" portion of the course.  I always love seeing clues that reflect how much the times have changed!

There's a new challenge up in the sidebar—as always, every day one new letter will be added to the solution, hangman style, until the answer is posted.  Good luck!

While proofreading a batch of 1964 puzzles, Todd Gross discovered that New York Times typesetters had misprinted one of the solutions such that several entries appeared in white type within black boxes!  In addition, several black squares appeared as blank white squares for some reason.  The puzzle itself, which has a subtle -CH theme, is quite nice—CATCH AS CATCH CAN crossing two theme entries is especially elegant.  Perhaps the constructor included CATCH AS CATCH CAN to taunt any proofreaders who failed to notice the errors in the solution!  Below is a screenshot of this anomaly—thanks again, Todd! 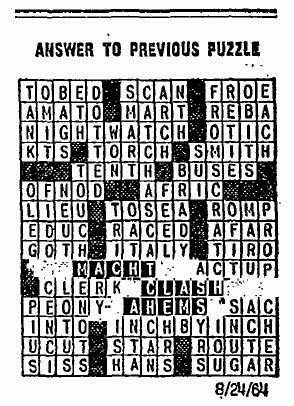 Today's featured puzzle was constructed by Jack Luzzatto; published February 1, 1958; edited by Margaret Farrar; and litzed by Nancy Kavanaugh.  This stellar 68-worder is the cleanest pre-Shortzian puzzle I've come across so far—I was amazed to discover that the grid is free of both major obscurities and pieces of pre-Shortzian crosswordese.  There isn't even a multiple-word partial phrase to detract from this puzzle's beauty!  One could quibble with KOP (which was clued as "Hill, in So. Africa.") or LUPE ("Actress Velez."), but both these entries have more modern cluing options, such as "Keystone lawman" for KOP and "Rapper Fiasco" for LUPE.  In fact, there are so many fun entries in this grid that splitting hairs over entries whose clues aren't as well-known these days or over some of the less in-the-language -er concoctions (such as PANTER and BUSTLER) seems unnecessary.  After all, who doesn't like seeing CATHODE, REARGUARD, DENATURED, RASHERS, KINDRED, and PEPPER POT in a themeless puzzle?  I also appreciated learning a new term:  TRIP LINE ("Rope used as a releasing device.").  Webster's primary definition for trip line is "a line or light rope used to operate a trip (as to free a dog hook in logging)."  In my continuous journey through New York Times crossword history, I've found that certain bylines are particularly thrilling to see—Jack Luzzatto's is definitely among my favorites!  I love how Luzzatto experimented with wide-open grid patterns rather than sticking to standard 72- and 74-word designs that showed up time after time in the pre-Shortzian era; every once in a while, he would even go so far as to include a minitheme in one of his ambitious grids.  And his filling skills give even computer programs a run for their money!  Luzzatto also seems to have had quite the sense of humor—in many of his constructions, I've come across clues that are exceptionally clever for their time.  I didn't see any such clues in this puzzle but did notice the juxtaposed clue pair "Operatic star." and "Operatic aria." for DIVA and SOLO, respectively.  I look forward to featuring more Luzzatto masterpieces in upcoming blog posts!  For now, here's the answer grid for this one: 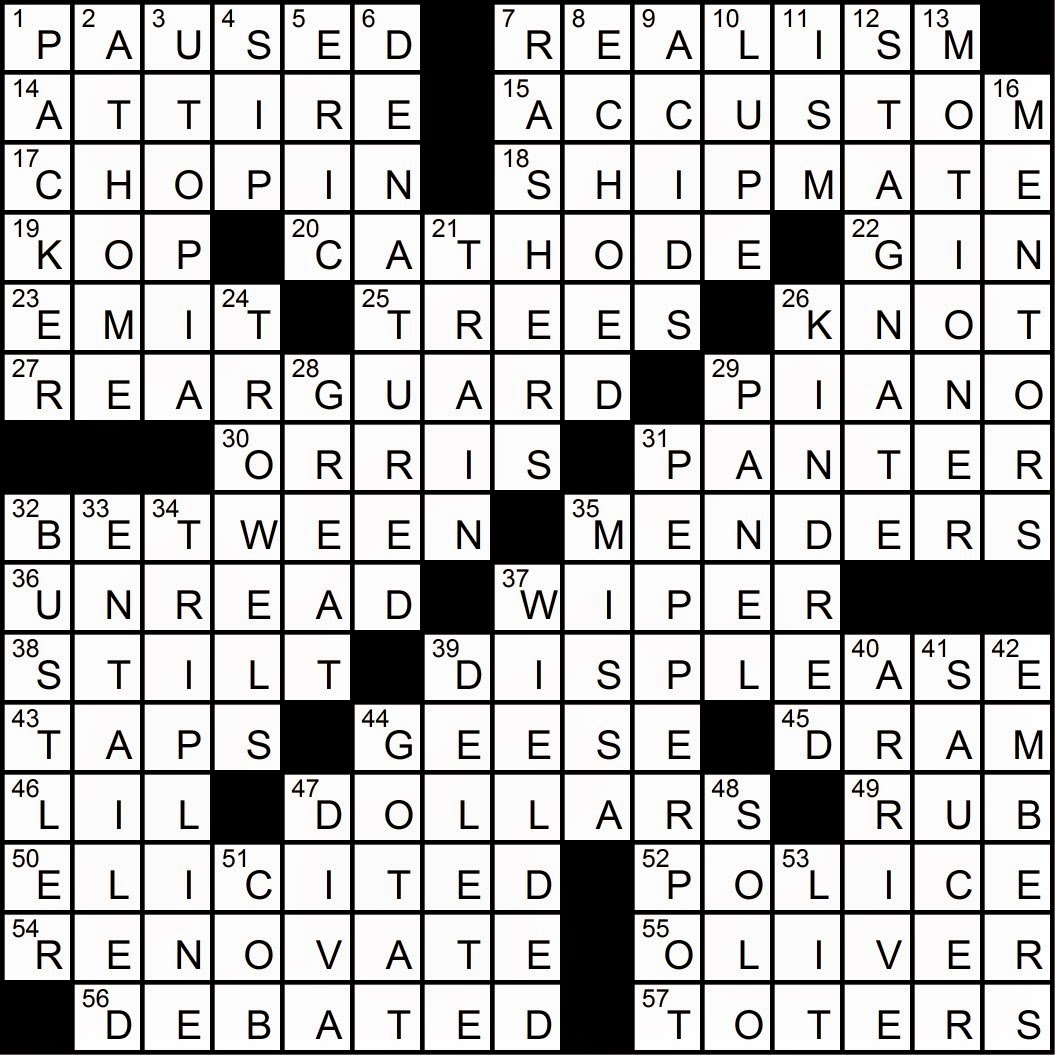 Below is a list of clues from early 1958 crosswords that interested or surprised me for one reason or another—when considered as a whole, they are truly a mishmash!  The answers to these clues are included in parentheses, and the constructors' names (if known) appear after the dates.  All these puzzles were litzed by Nancy Kavanaugh and edited by Margaret Farrar.

The most bizarre clue I've seen from early 1958, however, came from the April 8 puzzle by Herb L. Risteen, which was litzed by Ralph Bunker.  The clue:  Supposedly extinct bird, recently found in Bermuda.  The answer:  CAHOW.  This reference is so specific and obscure that it made me laugh out loud—clue/entry pairs like this one make running the Pre-Shortzian Puzzle Project so much fun!  I can't think of a better way to close off this post than with a picture of a cahow:

Posted by David Steinberg at 4:07 PM