The Most Shocking Pre-Shortzian Puzzle So Far, Plus Todd Gross's Research on Janet R. Bender

We've been making good progress this week!  Sunday evening Denny Baker sent in 26 puzzles, Tuesday afternoon Todd Gross sent 10 more with 13 mistakes, and Wednesday afternoon Dave Phillips sent 29 puzzles with 40 mistakes.  Thanks so much, everyone—at this point, all the existing puzzles from 1965 have come in, and less than a month of 1964 remains to be done!  The year 1965 is the first with major gaps and inconsistencies; as soon as I've taken another look at those, I'll be sending the proofread puzzles off to Jim Horne at XWord Info.

There were no correct answers to last week's Blast! from the Past challenge, which was from the September 2, 1964, puzzle.  The entry was WAITING UP, and the clue was "Parents' indoor sport."  Indeed!  Next week's challenge can be found in the sidebar—good luck!

Some time ago I received an e-mail from Todd Gross about pre-Shortzian and Shortz-era constructor Janet R. Bender.  According to my (still incomplete) records, Janet published two puzzles in the pre-Shortz era.  Todd had seen the November 3, 2014, puzzle by Janet and that Will Shortz had "not only called her one of the old guard, but mentioned she's from Somerset, PA."  Todd decided to research her on Ancestry.com and Google and discovered she was born in 1947, though he wasn't sure where.  Here's some of what else he found:


My sense is Bender is her maiden name, but I can't prove it.  I haven't found any articles about her crossword work.  But I found other interesting stuff.

More interestingly, it looks like she's interested in genealogy, having worked on an article titled "John Ringler and his Descendents" for the Casselman Chronicles (1996, Vol 2).  I found it referenced in a few places, including this one:

Other places mention she's done a fair amount of work for the Casselman Chronicles, she was a secretary, I think.  So interested in history and genealogy, there are a lot of Benders in the area, and I think this is Amish country.

Finally, one more interesting tidbit.  A letter to the editor she sent to the Los Angeles Times (why the LA Times I don't know):


Thanks so much again, Todd, for all this insightful research!

The Most Shocking Pre-Shortzian Puzzle So Far

When Todd sent in his proofread puzzles on Tuesday, he also noted:


I was rather surprised to see Ms. Farrar have MURDERED as an entry given her avoidance of unpleasant subjects.  In this case, it was clued as [Marred, as by giving a bad performance.]  Hmmm.  That's not how I would use the word.  Note, too, its grid opposite is VENGEFUL, which fits a bit too well with the usual definition of murdered.

I wrote back that I'd seen a puzzle from 1958 that he'd probably be stunned was ever published—one that made MURDERED and VENGEFUL look tame by comparison!  That said, this week's featured puzzle, whose constructor is unknown, was published May 21, 1958; edited by Margaret Farrar; and litzed by Ralph Bunker.  This puzzle is the new earliest example of grid art I've seen in a New York Times crossword:  As suggested by SWASTIKAS at 6-Across, the central block arrangement resembles a swastika!  The constructor/editor clearly tried to offset the strong negative connotations of this symbol by cluing SWASTIKAS as "Ancient symbols of good luck."; nevertheless, I'm amazed that this puzzle was published.  World War II had ended just 13 years prior to the puzzle's publication, so I doubt whether any solvers appreciated a reference to Hitler's regime.  I also doubt this puzzle would be salable today, even though many more years have passed and both SWASTIKA and SWASTIKAS have appeared in Shortz-era New York Times crosswords.

The nonthematic fill is much more pleasing than the disturbing minitheme—I especially like the entries PALEOLITH, MONTEZUMA, CANAVERAL (complete with the Space Age clue, "Focal point in the news."), ABORIGINE, ALABASTER, BELFAST, and CROSTIC!  I'm not thrilled with LAMBARENE ("Dr. Schweitzer's locale."), a city in Gabon whose population as of 2009 was just 25,257, though I suppose it may have been more of a household geographic name at the time of this puzzle's publication.  And I did enjoy reading about Albert Schweitzer, who led a truly fascinating life and won the Nobel Peace Prize in 1952.  In any case, the short fill is remarkably clean, with TRS ("Fund officials: Abbr.") and TAA ("Chinese pagoda.") being the only real blemishes.  Overall, this puzzle has an unfortunate minitheme, though the fill is quite nice, and I appreciate that the constructor experimented with the then-uncommon practice of including art in grids.  The answer grid (with the highlighted theme entry) can be seen below: 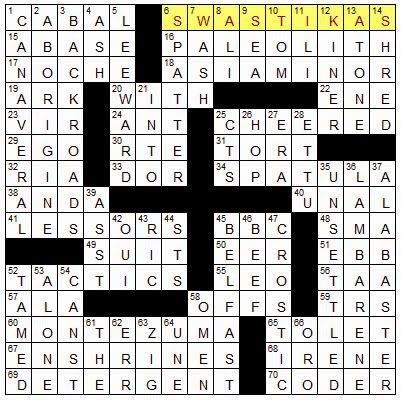 Posted by David Steinberg at 7:07 PM