Happy New Year, everyone!  To start off 2015, I'm delighted to present an interview with the prolific pre-Shortzian constructor I. Judah Koolyk, who had a total of 40 crosswords published in the Maleska era!  Judah first contacted me early last month.  He introduced himself and mentioned that he'd discovered this site; he also included a long list of the publication dates of all his Times crosswords (and even his variety puzzles!).  I was very excited to hear from him and sent along some additional dates of puzzles listed as being his.  When I asked whether he'd be interested in being interviewed for this site, he said he would, though he wondered (needlessly) whether anyone would be interested and worried that his answers might be "too boring"!  (He also mentioned that his 15-year-old daughter would be thrilled to see that her dad was so famous!)  To read Judah's eloquent and informative interview, click here or on the Pre-Shortzian Constructor Interviews tab above.

Despite the holiday season, it's been very busy on the proofreading front over these past two weeks!  On Sunday the 20th, Todd Gross sent in 10 puzzles with 17 mistakes, then 8 more with 15 mistakes on Monday night and 10 with 14 mistakes Tuesday night.  Christmas Day Denny Baker sent in 35 puzzles.  On Saturday afternoon Mark Diehl sent in 31 puzzles and then 29 more that night.  Sunday afternoon he sent 28 more, then a few hours later another 25, then 30 more that evening, then 31 more later on—whew!  Monday he took a brief break from proofreading so we could meet for lunch since he was in the area—we had a great time eating pizza in Echo Park, followed by a sojourn to a fascinating place nearby called the Time Travel Mart (a fitting destination, given our time travels through pre-Shortzian puzzles!).  Tuesday afternoon Mark sent another 31 puzzles, and then Wednesday morning Todd sent in 12 with 19 mistakes, which were followed by 30 more from Mark.  Thursday morning Mark sent 28 more, and then another 28 that afternoon, followed by 33 more, and then 30 more that night—whew again!  Finally, Friday afternoon Todd sent 10 more puzzles with 25 mistakes.  What an amazing two weeks of proofreading—thanks so much again, everyone!

Congratulations to Barry Haldiman, who, on Friday the 26th at 9:55 a.m., was the first to solve the December 19 Blast! from the Past challenge!  The challenge, from the puzzle published on April 8, 1959, was to guess the three-word clue for the entry HAIRDO; the solution was "Woman's top problem."  Todd Gross came across a great clue-entry pair while proofreading recently, and I've decided to make it this week's Blast! challenge, which you'll find in the sidebar.  As with previous Blast! challenges, a new letter will be added every day, hangman-style.  Thanks so much again, Todd—and good luck, everyone!

This week's featured puzzle, one of my favorites by I. Judah Koolyk (second only to this one I featured in 2012), was published May 10, 1985; edited by Eugene T. Maleska; litzed by Todd Gross; proofread by Kristena Bergen; and can be solved on XWord Info.  This impressive construction features four symmetrically interlocking 15-letter definitions of colors in a sparkly 68-word grid!  For example, the clue for RANK OF A CARDINAL is "Purple"; similarly, the clue for CONFEDERATE ARMY is "Gray."  I like that none of the definitions include the word color, and I especially appreciate that some of the definitions reference a completely different sense of their color words (such as TURN INTO LEATHER for "Tan").  And it must have taken hours to generate a list of theme entries that interlock so elegantly by hand!  Appropriately, Judah squeezed many colorful entries into the nonthematic fill—my favorites include SOAKER, ECLAIRS (yum!), STYMIE, SHANKED, and ARMHOLES.  That's quite a list of strong entries for a thematic 68-worder!  Even better, the only quasi-obscure entry is MILLIME (clued as "Tunisian coin"), which is an interesting word that I would have appreciated learning as a solver.  It turns out that a millime is equivalent to 1/1000 of a dinar, which makes sense, since a millimeter is 1/1000 of a meter.  And the only piece of fusty crosswordese is SKEP, which Judah or E.T.M. gave the original clue ("Wicker basket") to keep things interesting.  When I see the entry SKEP, I automatically think "Straw beehive," so I may well have struggled a bit with the "Wicker basket" clue.  Speaking of clues, "Item in a bar" for SOAP and "Item in the holy of holies" for ARK are particularly nice.  Although the rest of the clues are mostly dictionary-based, I appreciate Judah's and E.T.M.'s eye for fresh definitions, such as the one for SKEP I mentioned above.  In all, this is a standout pre-Shortzian puzzle—just one of many that place Judah among the finest constructors of the Maleska era!  This puzzle can be viewed on XWord Info, though I recommend looking through the page that lists all of Judah's puzzles.  As usual, the answer grid (with highlighted theme entries) can be seen below: 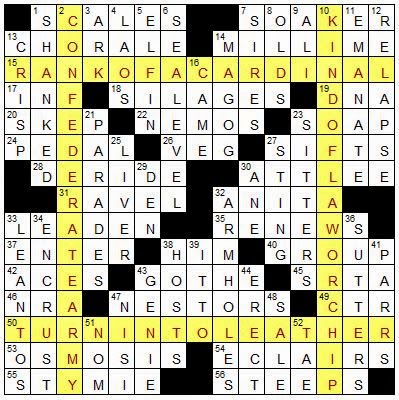 Posted by David Steinberg at 5:46 PM

Email ThisBlogThis!Share to TwitterShare to FacebookShare to Pinterest
Labels: Barry Haldiman, Blast! from the Past, I. Judah Koolyk, Mark Diehl, Todd Gross