What with the American Crossword Puzzle Tournament (ACPT), it's been a very busy two weeks, but we've still managed to make great progress on the proofreading front!  Starting off with the first week, on Saturday afternoon Mark Diehl sent in 31 puzzles and then 12 more, which were followed by 23 from Denny Baker that evening.  Sunday night Mark sent another 30 puzzles and then 25 more Monday night.  Tuesday morning Denny Baker sent 11, then Mark sent another 31 that afternoon.  Early Wednesday morning Mark sent 28 more and then another 31 that afternoon.  Thursday evening Denny sent in 24 puzzles—the last for that week.  This past week Mark sent 23 Sunday night.  On Monday Denny sent in 24 more, then 18 more Thursday morning and then another 6.  Friday morning he sent another 25 puzzles, which were followed by 10 from Todd Gross (who found 17 mistakes) later that afternoon.  Thanks so much again, everyone—terrific job once again!

The Blast! challenge was up for two weeks this time but was solved with lightning speed by litzer Doug Peterson, who sent in the first correct answer on Sunday, March 22, with only two letters having been revealed—congratulations, Doug!  The clue from this April 3, 1955, puzzle was "Modern enigmas.," and the answer was FLYING SAUCERS.  I suppose flying saucers are still modern enigmas, especially with the advent of Photoshop, but seeing such a clue from 1955 was a real thrill from a historical perspective!  This week's Blast! challenge is up now in the sidebar—good luck, everyone!

As usual I had a blast reconnecting with old crossword friends and meeting new ones at this year's ACPT!  Legendary litzer/proofreader Denny Baker came to the tournament for the first time since 2006, so I had the pleasure of meeting him in person!  The last ACPT Denny attended was in Stamford, so he felt right at home with the tournament's move back this year from Brooklyn.  Interestingly, even though this was my first Stamford ACPT, I felt right at home, too!  Even better, as I was informed sometime after Puzzle 5, the coffee shop at the hotel happened to sell Afrin—had I noticed this, I would have had eight perfectly clean solves.  Unfortunately, I'd never heard of Afrin, so I ended up guessing AFRIT instead.  At next year's ACPT, I'll be sure to take full advantage of my surroundings!  For now, here's a picture of me and Denny: 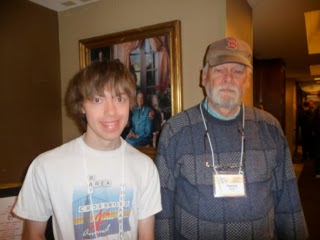 And here's another one of litzer Tom Pepper and me—the New England cold was nothing compared to what Tom and other Minnesotans routinely experience! 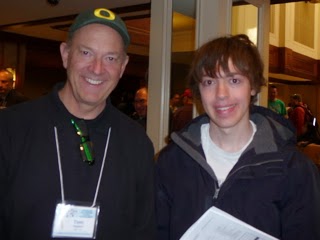 Another highlight this year was meeting constructor Ed Stein, who had one New York Times puzzle published during the Maleska era but couldn't remember exactly when.  Ed did, however, remember some of the theme entries.  In just a few seconds, I was able to pull up Ed's puzzle on XWord Info and show it to him in person!  It turned out that his puzzle was published July 28, 1980; even better, it was one of the puzzles for which the constructor's first name hadn't yet been identified, which means that XWord Info will be one small step closer to perfect completion!  The puzzle itself has a rather subtle theme that I missed at first glance:  Each theme entry, such as ANNIE OAKLEY (clued as "Pass"), is eponymous—that is, it's a word or phrase that derives from someone's name.  Very cool!  Unfortunately, Ed stopped submitting to the Times for many years after his first publication, having received one of Maleska's infamous rejection letters in response to his second submission.  Ed's next Times puzzle appeared in 1994, and he has since gone on to have a handful more, most in collaboration with renowned constructor Paula Gamache.

A third project-related highlight of my experience was catching up with the ever-prolific Arthur Schulman, who now constructs more variety crosswords than standard ones.  Some of his more recent works have included a vowelless-esque puzzle, in which only the first half of the alphabet is entered into the grid, and a puzzle in which every entry is a consonancy.  Arthur claims such puzzles are easier to construct, though I suspect that he may just be so experienced that all crosswords and crossword variants come easily to him as a constructor!  Here's a picture of Arthur and me: 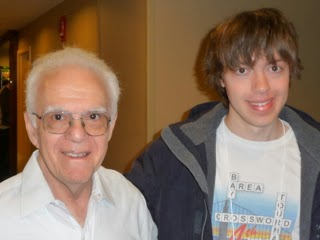 Finally, I gave a speech about the project again as part of the Friday evening events, this time about the computer program I wrote to try to identify the most likely constructors of crosswords without bylines using computational stylometry—the statistical analysis of variations in linguistic style or images using computers.  The program used seven factors, including block count, word count, and average clue length; although definitively determining the constructor of every puzzle without a byline won't ever be possible, through the use of computational stylometry guesses can be made—in some cases, quite accurate guesses!

After all the excitement of the ACPT, I decided to decompress by looking through my file of unusual entries from pre-Shortzian puzzles.  This file has grown exponentially now that the proofreading process is as streamlined as my preliminary scans of each puzzle!  The following salmagundi of seven entries came from June 1956 puzzles alone, all but one of which were litzed by Mark Diehl:

My favorite of these entries is KALONGS, which, appropriately enough, appeared in Arthur Schulman's puzzle from June 27; here's a picture of one of these beasts:

Posted by David Steinberg at 5:37 PM