It's been another busy week!  Todd Gross started us off this time with 10 puzzles (in which he found 22 mistakes) late Sunday afternoon.  Tuesday morning Denny Baker sent in 30, which were followed a few hours later by 31 from Mark Diehl and then, that night, 20 more from Mark.  Early Wednesday morning Todd sent in 11 puzzles with 22 mistakes and then 3 more with 4 mistakes a bit later on.  Late that night Mark sent 31 puzzles, then 29 more Thursday morning.  Great job, everyone—thanks so much again!  I'm hoping to have the 1958 puzzles ready for Jim Horne at XWord Info by early next week.

Congratulations to another three-peat Blast! challenge winner, Doug Peterson!  On Wednesday Doug sent in the correct answer, HAWAIIAN STATEHOOD, to the August 30, 1953, puzzle clue "This bill has passed the halfway mark."  What a contrast with the bills in Congress nowadays!

This week's challenge is now up in the sidebar—good luck, everyone!

Despite returning to a ton of work (not to mention college decisions!), I'm still basking in the aftermath of the ACPT, where, among other things, I received two awesome crossword T-shirts (see photos below)!  The first features the very cool XWord Info logo, and the second is from the 2006 ACPT (closer to the pre-Shortz era and, as you can see on the shirt, definitely the original Stamford era!)!  Thanks so much again, Jeff, Jim, and Lynn!

Some time ago Raymond Simon, an editor at GAMES World of Puzzles, contacted me about possibly getting a photograph of legendary constructor Bernice Gordon for a piece he was writing about her crossword life.  His article is in the May 2015 issue, and with the magazine's permission, I've reproduced it below: 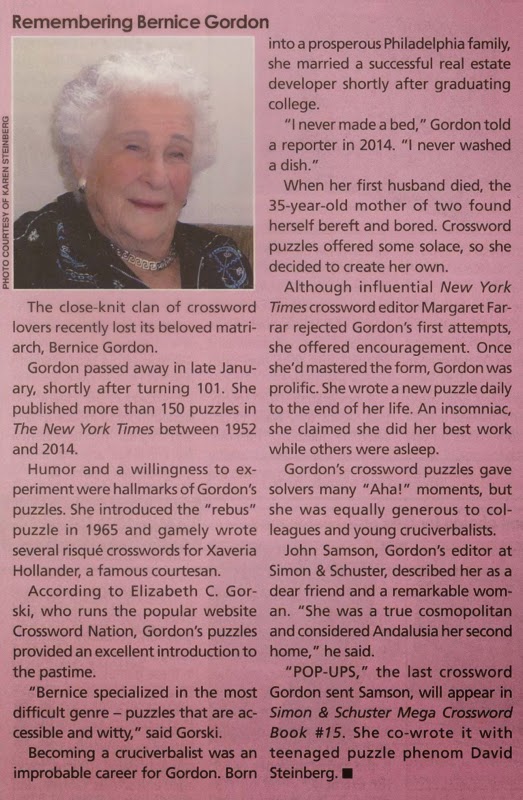 Thanks again, Ray, for this touching tribute to Bernice.
Posted by David Steinberg at 3:31 PM