Another year is done:  The 1958 puzzles, which you can see here, are now up on XWord Info—thanks again to Jim Horne for hosting them!  And we're well on our way with more—Friday night Mark Diehl sent in 31 proofread puzzles, then another 22 Saturday night, and 18 more later on!  Sunday morning he sent in 13 puzzles, which were followed by 21 more late that afternoon.  Early Monday morning Todd Gross sent 10 puzzles with 50 mistakes (and a grand total of 403, if you count all the missing periods!).  Then Tuesday morning Mark sent another 14 puzzles, with 19 more appearing that night.  Wednesday morning Todd sent in 10, which were followed by 15 from Denny Baker and then 31 more from Mark and another 7 from him just after noon—a banner morning for proofreading if there ever was one!  Thursday morning Todd sent 11 more, then that afternoon Mark sent another 28, which were followed by 28 more that evening from Denny.  And Friday morning Mark sent another 31 puzzles.  Thanks so much again, everyone—we've made tremendous progress this week!

I'll be attending an admitted students event at Stanford (not Stamford!) for several days next week, so the next blog post will be in two weeks, when I hope to be finished with the 1957 puzzles!  As always, you can continue to send in proofread puzzles while I'm gone, though I may not be able to send out any new ones until my return.

Mark Diehl was the first person to solve last week's Blast! challenge—he sent in his answer late Saturday night, after only one letter (the E) had been revealed!  Congratulations, Mark!  The clue from the July 12, 1956, puzzle was "Quest of the modern 'forty-niner.'"  The answer:  URANIUM ORE.  This clue certainly enriched my understanding of the 1950s!

As usual, you'll find the next Blast! challenge in the sidebar—the name of the first person to solve it correctly will be announced in two weeks!

I've been going through a few more issues of CROSSW RD Magazine, and this week I've posted Helene Hovanec's wonderful profile, "The Limerick Lady," of the legendary Frances Hansen on Scribd—to read it, click here.  Although Frances was perhaps most famous for her limericks, she can also be credited with popularizing the rebus puzzle:  She was among the first constructors to regularly use this then-novel gimmick.  Another interesting thing about Frances is that although her first Times puzzle on record dates back to 1964, she didn't publish any daily-sized crosswords until 1983!  She was truly a master of Sunday grids.


The article mentions that one of Frances's puzzles inspired humorist Russell Baker to write "Crashing into Crosswordland," a hilarious column that appeared in the January 19, 1975, New York Times and that can be accessed for free through many libraries on ProQuest. 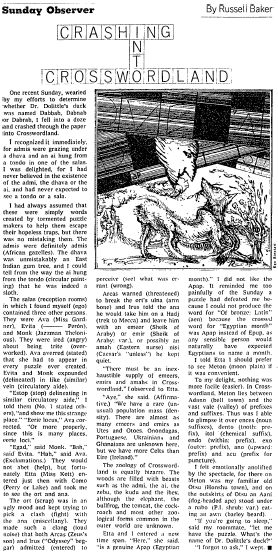 Today's featured puzzle was constructed by Eugene T. Maleska; published September 10, 1955; edited by Margaret Farrar; and litzed by Mark Diehl.  Seven entries in this puzzle's grid contain the word HORSE; as a bonus (and to make the theme symmetrical), CLOSE RACE was added as an eighth theme entry.  Generally I'm not a big fan of repeated-word themes, but this one stood out to me for two reasons.  First, the interlock of the theme entries is remarkable!  Having double-stacks of 9- and 10-letter entries cross was especially uncommon in pre-Shortzian themeless puzzles, so pulling off such an ambitious grid using only thematic 9- and 10-letter entries was no mean feat.  More significantly, however, the HORSE parts of all the theme entries look like they're competing in a close race, provided that the grid is treated as a racetrack.  This interpretation of the theme entries' layout may be a bit of a stretch—the constructor may simply have been striving for impressive theme entry interlock—but I was totally feeling the visual element!  The assortment of bonus horse-related entries (such as MANEGE, SHOW, and STALL) scattered throughout the grid is another nice touch.  The nonthematic fill has a handful of chewy entries, though the puzzle was published on a Saturday, so the inclusion of tougher vocabulary is more forgivable.  Yes, I'm talking to you, PURLIEU ("Outlying district."), VOLANT (clued as "Able to fly."), and SOCORRO ("City in New Mexico.")!  Interestingly, the most esoteric entry in the grid, HORSE EMMET ("Large ant."), is one of the theme entries.  I wasn't able to dig up much information about this bugger!  On the flip side, DRY ICE and PREFAB are excellent, and GSC ("General Staff Corps: Abbr.") is the only real stinker among the 3- and 4-letter entries.  In all, this is a top-notch pre-Shortzian puzzle whose possible visual element really sung to me!  In fact, many of Maleska's Farrar-era constructions were standouts for their time.  In any case, here's the solution grid (with highlighted theme entries) for this puzzle: 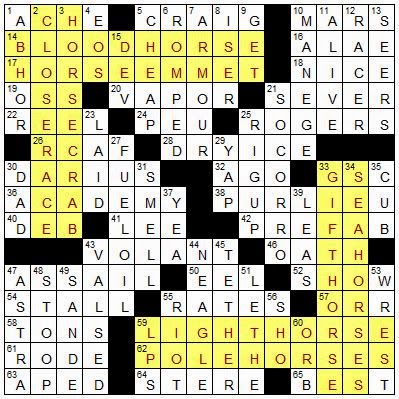 Posted by David Steinberg at 4:24 PM