Great news—the 1957 puzzles are now up on XWord Info, and I'm making my way through the ones from 1956, which have all been proofread!  Thanks again to Jim Horne for hosting them!

It's been another busy week, starting off on Saturday afternoon with 31 proofread puzzles from Mark Diehl!  Sunday evening Denny Baker sent 13 more, and then Monday morning Todd Gross sent in 9 (in which he found 45 mistakes).  Late Tuesday afternoon Denny sent 11 more, which were followed by 31 from Mark that night and another 30 from Mark later on.  Wednesday afternoon Mark sent 31 more, then another 20 at the end of the afternoon and 14 more Thursday morning.  And then Friday afternoon Todd Gross finished off the week with another 13 puzzles (which contained 95 mistakes)!  Great job, everyone—thanks so much!  We're now zipping through the 1940s, when there were no daily puzzles, so at this rate we should be done with all the proofreading in the not-too-distant future!

Congratulations to Mark Diehl, who, on Monday at 9:46 a.m., after three letters had been revealed, was the first to send in the correct answer to last week's Blast! challenge.  Mark is also another three-peat winner—congrats, congrats, congrats, Mark!  The clue, from the September 7, 1952, puzzle, was "It's all the rage in drugstores."  The answer:  CHLOROPHYLL.  I wasn't around back then, so it's hard for me to imagine throngs of shoppers lining up to buy chlorophyll!  And Mark noted, "I don't remember it being 'the rage' as a deodorizer, but apparently it was—though it was scientifically debunked in the form being sold."

There's a new Blast! feature now on the Contest Totals page, where you'll find a list of all the Blast! challenge winners so far, in alphabetical order by last name and with the dates their wins were announced, by number of Blast! challenges won.  Keeping track of everyone's wins was becoming increasingly "challenge-ing," so this should help!  Maybe this week's Blast! (see the sidebar) will even give us our first four-time winner!

Jim Horne has a terrific baseball card feature up on XWord Info!  This is a fun and easy way to keep track of pre-Shortzian constructors' "stats."  For example, as Jim pointed out, there are now 72 puzzles by Helen Fasulo up on the site.  Since Helen Fasulo never published a Sunday crossword in the Times, her name would have been lost to history if we hadn't gone through the process of matching the bylines from the Farrar daily puzzle collections to my spreadsheet.  Now if only we could find her photo! 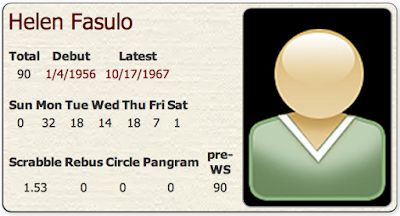 As some of you may remember, back in November 2013 I posted a link to Eric Albert's fascinating 1992 article "Crosswords by Computer—or 1,000 Nine-Letter Words a Day for Fun and Profit."  As I was looking through more old issues of CROSSW RD Magazine this week, I was delighted to discover a profile of this crossword software pioneer by Helene Hovanec.  The article, "A Man, a Plan, a Computer," appeared in the September/October 1992 issue and is now on Scribd.  Here's a particularly interesting quote:

. . . there's a reason I sell everything I do and there's a reason I got so popular so quickly.  Unlike the majority of others I construct to make money.  I didn't grow up thinking someday I wanted to be a crossword constructor.  Most people in this business really enjoy sitting down and making crossword puzzles.  The reason I got into this was to make a living; so I spend all my energies on two things—trying to make the editors happy and trying to make the solvers happy.  I almost never construct a puzzle to make me happy.

I thought I'd hit the pre-Shortzian crossword jackpot when I discovered last week's featured 68-worder, though much to my surprise, I discovered an exceptional 66-worder just a few days later!  This crossword, whose constructor is also unknown, was published May 24, 1952; edited by Margaret Farrar; litzed by Denny Baker; and proofread by Mark Diehl.  The puzzle had so much strong fill that I never would have guessed the word count was so low!  My favorite entries are CAPTIVE AUDIENCE, RHODESIAN, MOONLIGHT, BARREL OF MONKEYS, GAS TANK, RIN TIN TIN, and PIPELINE.  I was also pleased to learn a few new longer terms, such as ARCHCHIEF (clued as "Supreme tribal ruler."), OREGON OAK ("Valuable hard wood grown on the Pacific Coast."), and STORM KING ("Peak on the Hudson near West Point.").  Most of these strong and/or interesting entries are concentrated in the center section of the puzzle, which I'm amazed required so little glue to hold together!  That said, the gluey entries that were needed strike me as especially unfortunate.  PECAS ("Freckles: Spanish") is a tough foreign word; REBET ("Wager again.") isn't in the Merriam-Webster online dictionary; and AGEN ("Again: Dial."), BAGA ("Rutabaga, for short."), and SLAN ("Sine loco, anno, nomine [without place, year, or name]: Abbr.") are so iffy that they pretty much have to be clued such that they become giveaways.  Overall, though, the good stuff definitely outweighed the bad, and I really appreciate how the constructor pushed the envelope in terms of grid design during a period of New York Times crossword history in which some grids still contained two-letter words!  I realize that tough-to-fill grids almost always lead to numerous compromises in the fill.  Thus, in my opinion, the quality of the smaller/easier-to-fill sections says the most about a constructor's skill.  Check out how smooth the middle right and middle left sections of this puzzle are—not a single unfamiliar word, name, or abbreviation!  That's how I know the constructor must have been truly desperate to resort to an entry like SLAN—that is, he or she almost certainly looked for many alternatives before settling on such a major obscurity.  If I had to make a guess as to who constructed this puzzle, I'd go with Jack Luzzatto, one of the all-time greats who frequently experimented with wide-open grids!  Regardless, this is a very nice pre-Shortzian puzzle, and I hope to see more like it as I finish off reviewing the last couple of years of daily crosswords.  For now, here's the solution grid: 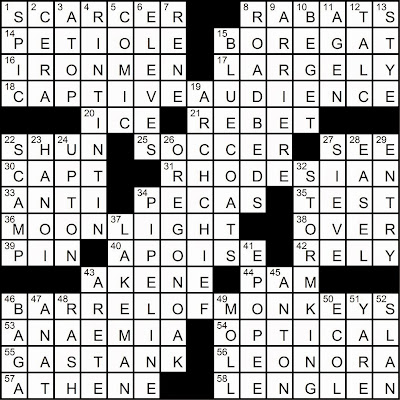 Posted by David Steinberg at 4:12 PM