This week was jump-started last Friday afternoon by Todd Gross, who sent in 9 puzzles with 58 mistakes.  Then less than an hour later Denny Baker sent in 14 more.  On Sunday afternoon Mark Diehl sent 13, which were followed by another 14 from Denny that night.  And Wednesday night Denny sent 13 more.  Great job, everyone, and thanks again!  I'm now sending out puzzles from 1943—the end is definitely in sight, and by early next week I should have the 1955 puzzles ready to send to XWord Info!

As Denny was proofreading this past week, he made a great discovery:  The December 24, 1944, puzzle was by C. E. Noel, which he pointed out was an obvious pseudonym.  I hadn't noticed that before, and when Denny wondered who it could have been, my guess was Charles Erlenkotter.  Charles published five puzzles in the Times in 1942, including the first one ever on February 15, 1942; three in 1943; and one—if this was indeed his—in 1944.  According to my records, this puzzle was his last for the Times, and Ancestry.com lists a Charles Erlenkotter who passed away in 1948 in White Plains, New York.  Thanks so much again, Denny, for noticing this pseudonym!

Litzer, proofreader, and now Blast! solver extraordinaire Mark Diehl is on a winning streak!  On Monday at 10:30 a.m., after three letters had been revealed, he was the first to solve last week's super-hard Blast! challenge and is now the first five-time Blast! winner—congratulations again, Mark!  The clue, which was from the June 16, 1952, puzzle, was "Legal status for oleo in New York, July 1, 1952."  The answer:  PRECOLORED.  Sounds appetizing . . . not!


This week's Blast! challenge is up in the sidebar, as usual—good luck!

I've been continuing to make my way through the old issues of CROSSW RD Magazine, and this week I've posted Helene Hovanec's wonderful portrait of Margaret Farrar on Scribd.  "A Crossword Hall-of-Famer:  Margaret Farrar" was originally published in the November/December 1992 issue of CROSSW RD Magazine; to read it, click here.  The article was introduced by Helene's short piece "Robert Guilbert's Crossword Academy," which you can read here.  Guilbert spent the final years of his life trying to establish a crossword academy; I wrote about him and his American Crossword Puzzle Academy and Hall of Fame in posts on November 21, 2014; December 5, 2014; and December 19, 2014.  Although Guilbert's vision was never realized, Helene pointed out that "the raison d'etre behind his Academy—honoring the people who have contributed most to the profession—will continue in another format—through CROSSW RD magazine's establishment of a Crossword Hall of Fame."  Margaret Farrar was the first inductee.

Today's featured puzzle, whose constructor is unknown, was published Friday, May 2, 1952; edited by Margaret Farrar; litzed by Barry Haldiman; and proofread by Mark Diehl.  According to my records, this is the penultimate New York Times puzzle whose grid included two-letter entries for nonthematic purposes; the last, which was published August 1 of that year, is also an interesting construction and will likely be featured in a future blog post.  In any case, I find this 72-word themeless fascinating, even though it technically violates a basic rule of crossword construction.  By breaking the rules, the constructor was able to create double-stacks of twelve- and fourteen-letter entries, a feat that is much more difficult under modern grid restrictions.  The twelve- and fourteen-letter entries are all very nice, my favorite being the timely/anticommunist FREE NATIONS.  Both the two-letter entries the constructor used, OF and NT, seem stronger to me than numerous other short entries in the puzzle, such as TORP (clued as "Small farm, in Sweden.") and NEI ("Moslem flute: Var.").  I find it slightly annoying that OF crosses NORTH OF IRELAND, but I've seen many more major duplicates, even in modern-day constructions.  I wonder, are two-letter entries really that bad?  They've been banned in crosswords for many years, but how many more impressive constructions could be produced if they were allowed again?  Could, for example, the lowest block count (17) be pushed even lower?  And would the inclusion of two-letter entries reduce the number of stale three- and four-letter entries that solvers always complain about, such as EKE and ALAI?  The natural argument against two-letter entries is that there are a limited number of them, which would make for an overly predictable solving experience.  Then again, there are 676 possible two-letter combinations, and would an occasional two-letter word be that detrimental to the solving experience?  I doubt these questions will ever be answered, especially since there's no Theoretical Crosswords major at any college (darn!).  But returning to the puzzle, I also appreciated the mid-length and longish fill in its grid, especially BOTTICELLI, RACCOONS, and HOUDINI.  BARBUSSE ("Henri ___, author of 'Under Fire,' 1916."), SAKHALIN ("Large island off coast of Siberia."), KRUTCH ("Joseph Wood ___, author of 'The Desert Year.'"), and NOROTON ("Town on L. I. sound above Stamford, Conn.") were all new to me, though the Stamford reference in the last of these clues made me smile!  Perhaps NOROTON would be a better place for a Scrabble tournament, given that its name consists of seven friendly letters (although NOROTON itself would be an illegal play).  In all, this is a fascinating and thought-provoking pre-Shortzian puzzle, despite its major shortcoming, and I'm looking forward to looking through more puzzles that make me ponder crossword conventions!  As usual, the solution to this week's featured puzzle can be seen below: 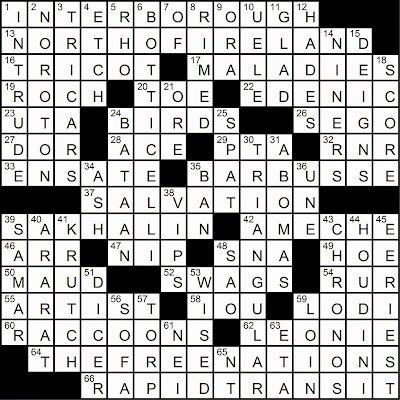 Posted by David Steinberg at 5:23 PM