Great news—we're now more than one-third done with all the litzing!  Even though things slowed down a bit after the October litzing contest ended and Sandy temporarily left some litzers without power, we're still moving at an amazing pace.  Thanks, everybody!

The proofreading is also going well—all the 1988 puzzles are now up on XWord Info!  Be sure to check out Jim Horne's awesome animation of Ralph G. Beaman's "Space Saver" puzzle that was featured a month or two ago.

In other news, the Pre-Shortzian Puzzle Project received some more great publicity this week!  Patrick Merrell announced the project on his blog Pat Tricks.  In addition, the Palos Verdes Peninsula News recently ran a great article that included more information about the project.  That part is about halfway through the article.

The Pre-Shortzian Puzzle Project T-shirts have been ordered and should be arriving soon!  As soon as they do, I'll be sending them to everyone who won or ordered a T-shirt.  Since the design on the current T-shirt is geared toward litzers, I'm considering creating a second T-shirt design that should have broader appeal.  If you have any design suggestions, please let me know!

Last but not least, litzer Jeffrey Harris finished typing up all the Will Weng–era constructor names from Will Shortz's index and Rolodex cards.  He sacrificed many lunch breaks to do this, and I really appreciate it.  Great job, Jeffrey, and thanks so much to you and Will again!

A week and a half or so ago, I received an e-mail from Denny (Holden) Baker, a Shortz-era constructor and one of Barry Haldiman's original litzers.  Denny converted many puzzles from 1957, and I thought readers might be interested in his reminiscences of litzing "back in the day." 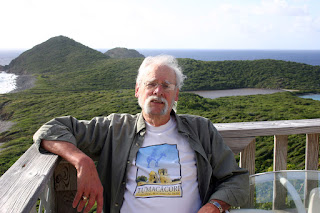 You were one of the first-ever litzers—how did you become involved with litzing?


The New York Times’s Crossword Forum was moderated (for a couple of years at least) by Hex (i.e., Emily Cox and Henry Rathvon).  Many constructors were participants on the forum; we called ourselves the CRU.  One of the things that happened on the forum was that people would post their own puzzles, or, sometimes, puzzles from sources other than The New York Times, for the delectation and consideration of other CRU.  Somebody on the CRU—I’m thinking it may have been Lloyd Mazer—coined the term litzing for what we were doing.

You litzed 79 puzzles back then, which was a lot!  Did you have a particular goal in mind, and what software did you use for litzing?

I did my litzing starting in late 2002 and on up until at least Jun 18, 2003.  I had no software for doing this.  I basically copied a puzzle by hand—entry by entry, clue by clue—into Crossword Compiler and then sent it to Barry Haldiman, who put it in the proper format for posting.  I used as my source Daily Puzzles, Crosswords from The Times, edited by Margaret Farrar, #11 in the series, published in 1964.  (Most of the puzzles were from 1953.  Barry did a great job of figuring out the original publication dates of almost all of those puzzles, as well as those of other books in the series.)  I litzed a few cryptics (my favorites) from a collection I had from the old Saturday Review of Literature, but I gave up on that due to the copyright difficulty.

How many other litzers were there, and did you see each other or mainly communicate by e-mail?

I knew the other litzers by name only, though the names were familiar to CRU members, and I met some of them at various ACPTs.  I met Barry on a trip west as we passed through KC, because he shares with me an interest in birding.  We had a great KC barbecue lunch, and he gave us some excellent suggestions on birding sites in Kansas.  A couple of years later, we again stopped for a barbecue lunch with Barry.  (Then he put up Denny’s Den on the Internet!  And it’s still there!)

What are the best and worst entries you've come across in a pre-Shortzian puzzle?

I have no particular least favorite or most favorite entry from those days; the puzzles were pretty dull, no themes whatsoever, no punning clues, in fact, few interesting clues or answers.

Which aspect of the eventual pre-Shortzian database are you most excited about?


Thanks so much again, Denny!

Today's featured puzzle, "Svittles," was constructed by Phyllis Fehringer.  It was originally published on October 21, 1990, and was litzed a few months ago by Andrew Feist.  This phenomenal construction features ten symmetrically interlocking food-related terms that take on a humorous meaning when an S is added to the front of them.  For example, SMOCK TURTLE SOUP is clued as "Dinner course, dressed up?" and SHAM BURGERS is clued as "Grill counterfeits?"  My personal favorite theme entry/clue is "Inebriated vege-taters?" for SMASHED POTATOES.  In addition to all these theme entries, the blocks in the center of the puzzle (which were shaded a different color in the PDF) form a giant S!  On top of all this, the fill is remarkably clean considering how open the grid is—I especially like the entries SLOWS UP, EXTRUDE, and AGITATOR.  TELEMARK (clued as "Skier's turn") and KERNITE (clued as "Important ore of boron") are a little obscure; overall, though, this is a fine pre-Shortzian puzzle.  The complete puzzle can be seen on XWord Info, and the answer grid (with highlighted theme entries) appears below: 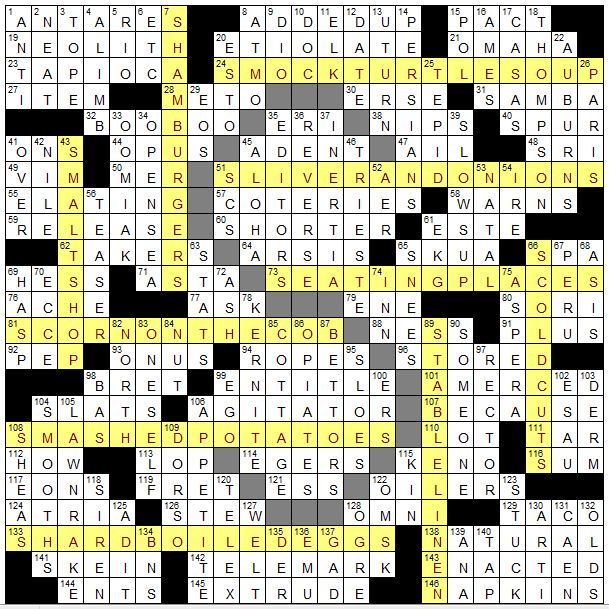 Today's featured pre-Shortzian entry is TATTERDEMALION.  TATTERDEMALION originally appeared in the November 21, 1979, puzzle by William Jarvis, which was recently litzed by Beth Welsh.  According to the Ginsberg database, TATTERDEMALION has been reused in a few Merl Reagle puzzles, though never in a Shortz-era New York Times puzzle.  The original clue for TATTERDEMALION was "Ragamuffin."  Webster defines a tatterdemalion as "a person dressed in ragged clothing."  It also lists tatterdemalion as an adjective meaning "ragged or disreputable in appearance" or "being in a decayed state or condition."  The origin of tatterdemalion is unknown, though it is known that the term was introduced into our language around 1608.  Below is a picture of a tatterdemalion flag:

Posted by David Steinberg at 4:46 PM