The October litzing contest T-shirts have finally arrived, and they look totally awesome!  Everyone who won or ordered a T-shirt should be receiving it soon—below is a picture of me in my T-shirt: 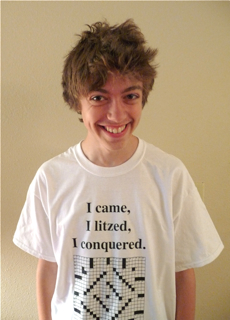 The Pre-Shortzian Puzzle Project received some more publicity this week, first in an article in the Palos Verdes Patch, then a write-up in The Puzzler (which can also be seen on Tumblr).  Thanks, everybody—it's great that more and more people are finding out about the project!

In other news, my family gets The Pennsylvania Gazette, the alumni magazine of the University of Pennsylvania, and I was thrilled to discover a profile of the amazing pre-Shortzian and Shortz-era constructor Bernice Gordon in this month's issue!  "Longtime Puzzler (2 words, 13 letters)" was written by Penn alumna Molly Petrilla, who also directs readers to a crossword created by Bernice especially for the Gazette titled "Across the Green and Down the Walk."

And now for my interview with Barry Haldiman and Beth Welsh, the first husband-wife litzing team for the Pre-Shortzian Puzzle Project!

Barry, how does it feel to have Beth litzing and proofreading now too?  You're the first husband-wife litzing team ever!

Initially, a bit annoying.  She’s helped occasionally in the past when I came across particularly thorny conversion issues or whenever I really needed a second look at puzzles.  But she never showed much interest, especially if they were Maleska puzzles.  At least I have my beer-tasting hobby that she won’t join in.   ;)

Beth, you started litzing and proofreading for the Pre-Shortzian Puzzle Project relatively recently.  What got you interested in it?

I thought it was pretty interesting from the time Barry first told me about it (when he originally got involved), but it didn't occur to me at the time to participate.  I guess it finally occurred to me that, since I already knew how to litz and I'm very good with details, plus I have the time to help since I work part-time—why shouldn't I volunteer?

Do you prefer litzing or proofreading, and why?

Litzing is more active, since you're typing a lot, and I feel a little bit like I'm creating something when I litz an old puzzle.  However, my typing skills have gone way downhill, and I make too many mistakes to be efficient.  Proofing is fun in its own way because it's like a treasure hunt:  finding each error is a little reward.

Barry, you litzed/obtained some of the puzzles Beth has been proofreading a long time ago.  Do you remember and discuss the puzzles?

I think Beth would come across particular puzzles in a collection that she thought were particularly good and she’d mark it “to litz.”  I don’t recall her converting very many, as we know it’s pretty labor intensive.  None of the puzzles come to mind, as it’s been quite a few years since then.

Do you ever litz together, or do you basically each stick to your own tasks on your own machines?

BETH:  Really, it never occurred to me to litz together.  I suppose we could try it, but I'm sure it's more efficient working separately like we do now.

BARRY:  Nope.  I’m pretty sure we litz differently anyway.  I put in the answer grids for the whole week of puzzles first, then enter the clues later and solve the puzzle regularly as an editing check.  I think Beth does more of a copy editor type of review.

Do you usually solve crosswords separately or together?

BETH: We solve certain crosswords together—tough ones.  Barry collects the printouts, and we usually do them when eating out, while we're waiting for our food to arrive.

BARRY:  And [we solve] many of the variety crosswords seen as the second Sunday New York Times puzzles and in the Saturday Wall Street Journal, though I’ve not gotten her to solve cryptics.  Finally, we do the New York Times and Wall Street Journal acrostics online together as well.  Still, we solve the large majority of our crosswords separately.

Beth, Barry already answered this question in his Litzer of the Month interview, but which aspects of the eventual pre-Shortzian database are you most excited about and why?

The scale of the project itself is the most impressive thing to me.  I'm not a constructor, so the database won't be of practical use to me—although, who knows?  By the time it's done, I may have taken up constructing. . . .


Thanks so much, Barry and Beth—it's great to have you both on board!

Before the puzzle of the day, here are a few more funny typos our proofreaders have caught:

Today's featured puzzle was constructed by William Lutwiniak.  It was originally published on July 28, 1979, and was recently litzed by Mark Diehl.  This puzzle's gimmick is so subtle I almost missed it altogether, though it is very clever!  It features eight theme entries with the same letter four times in a row, clued as if they were sounded out.  For example, UUUU is clued as "Woolly beasts?" (ewes), and CCCC is clued as "Understands?"  The nonthematic fill certainly makes up for lack of symmetry in some of the theme entries—I love the entries CORN POPPER, MATADORS, HOT PLATE, and SAWED OFF!  Overall, this puzzle is a real gem—to my knowledge, its brilliant theme wasn't reused until well into the Shortzian era!  The answer grid (with highlighted theme entries) can be seen below: 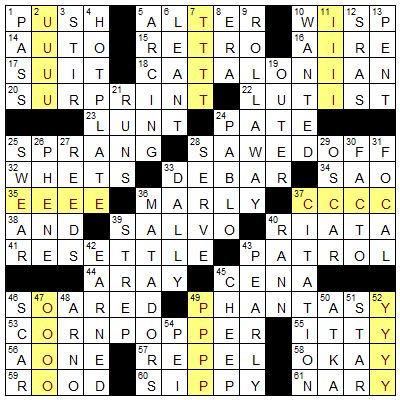 Instead of highlighting a single entry or clue of the day, I'm featuring several theme entries that appeared in the February 17, 1980, puzzle by Jordan S. Lasher.  This puzzle, titled "The Name of the Game," was recently litzed by Mark Diehl.  It featured the names of eleven unusual games beautifully woven into one of Jordan Lasher's signature wide-open, well-filled grids!  Below are four of the more bizarre-sounding games:

Further description:  Webster didn't define nine-men's morris very well, so I did some more research.  Nine-men's morris is a two-person strategy board game.  Players first take turns placing their nine game pieces on the board's twenty-four spaces.  If a player places three pieces in a row (called a mill), he can remove one of his opponent's pieces from the board.  After all the pieces are placed, players take turns moving their pieces to try to form more mills.  The first person down to just two pieces (or with no legal moves) loses!  Below is a picture of nine-men's morris:

Further description:  According to Webster, snipsnapsnorum is "a game in which one player lays a card on the table, the others in turn must match its rank if able, the first to do so says snip, the second snap, and the third snorum, and the winner is the one who gets rid of all his cards first."  Below is a picture of snipsnapsnorum:

Further description:  Webster lists housey-housey as a variant of the British card game house.  I hadn't heard of house either, so I looked into it some more.  Apparently house is a gambling version of bingo or lotto played with paper and a pencil.  The game was usually played by soldiers.  Below is a picture of housey-housey:

Further description:  Webster defines bumblepuppy as "whist [a trick-taking card game that was a forerunner of bridge] played poorly or without regard for the rules."  Who knew there was a special word for an unusual card game played badly?  Since I couldn't find a good picture of bumblepuppy, below is a picture of what whist is supposed to look like:

Posted by David Steinberg at 11:35 AM