I hope everyone had a happy Thanksgiving!  I'm especially thankful for all the litzing, proofreading, downloading, and other help I've received.  Without it, the Pre-Shortzian Puzzle Project would never have been able to move forward so quickly.  Thanks again, everyone!

I'm also very happy to report that nearly 5,700 puzzles have now been litzed!  Soon we'll be at 6,000, another major milestone.  We've also whizzed through 1979 and are now almost halfway through 1978, a relatively short year because of a long newspaper strike.

In other news, the Pre-Shortzian Puzzle Project received some more publicity this week on a new blog, MetaRex, which will comment on Rex Parker's blog and which is written by pre-Shortzian constructor Wayne Eastman (who contributed puzzles under the name Wayne Hall-Eastman).  Thanks, Wayne!

Before getting to the puzzle of the day, here are some more humorous typos our proofreaders have caught as we continue to move through 1987:


Today's featured puzzle was constructed by Tap Osborn.  It was originally published on February 12, 1979, and was recently litzed by Denny Baker.  This puzzle is certainly one of the most elegant pre-Shortzian Monday puzzles I've seen so far.  It features five symmetrical 15-letter dog breeds perfectly interlocked with the 15-letter reveal WESTMINSTER SHOW, which runs right down the center.  Just imagine all the hours of research Tap must have put into this puzzle to get it to work so neatly!  That said, some of the fill feels a bit tough for a Monday—I could do without EAR-ROT (clued as "Corn disease"), AAC (clued as "In the year before Christ: Abbr."), and YNE (clued as "Chemical suffix").  Nevertheless, it's amazing that Tap was able to pull off this brilliant Monday puzzle without any computer software!  The answer grid (with highlighted theme entries) can be seen below: 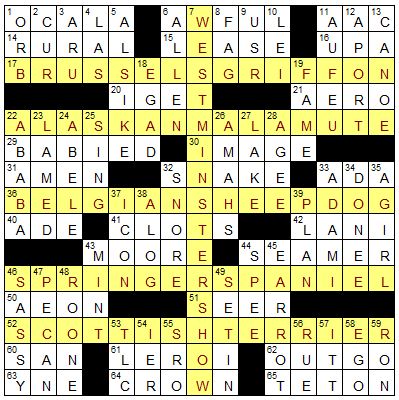 As the litzing has progressed, I've come across a number of not-so-great abbreviations that pre-Shortzian constructors were forced to use when stuck in a particular section of a grid.  Of all these abbreviations, here are a few worth calling out:

My least favorite of these three is definitely TTS, which doesn't even appear in the dictionary!  ABN isn't great either, but at least it's legitimate.  Please comment if you've encountered other questionable pre-Shortzian abbreviations either while litzing or while looking at pre-Shortzian puzzles on XWord Info—maybe there will be enough for a recap next week!  In the meantime, below is a picture that TTS would appreciate:

Posted by David Steinberg at 9:50 PM