I'm thrilled to report that even though the litzing contest has ended, litzers have continued to send in puzzles at a rapid clip!  We've now sent out the first few packets from 1979, which is very exciting!  I've already started noticing some fascinating trends in the puzzles from 1979 and early 1980.  For example, as we continue to litz back in time, we've started to convert puzzles by some of the other masters who stopped constructing puzzles around this time period, including Herb L. Risteen, Jordan S. Lasher, and Louise Earnest.  Pretty soon we'll be litzing some Jack Luzzatto puzzles!

November's Litzer of the Month is animal lover Nancy Kavanaugh!  In addition to being a professional dog groomer and New York Times crossword constructor, Nancy has also found time to litz an incredible 250 puzzles.  She only needs to litz one more batch to pass me—great job, Nancy!

In other news, the Pre-Shortzian Puzzle Project recently received some publicity on Pinterest, a website whose mission is "to connect everyone in the world through the 'things' they find interesting."  The blurb is currently on the far right of the top row, though it may move around a bit.

Finally, October litzing contest champion Mark Diehl has revealed the secret to his amazing litzing pace!  Below are his very inspiring answers to my interview questions:

By litzing a few puzzles every day.

Do you have a regular litzing schedule, or do you just litz whenever you have the time or inclination?

I try to litz at least one puzzle every morning before going to work.  It gets my mind limbered up to start the day (I've never been a coffee drinker).  After dinner and while watching TV, I'll litz some more—I find it a nice way to unwind from the hectic pace at work.  I try to average a week's worth every day.  On the weekends, I aim to average a bit more.

I take my laptop with me and try to keep up the daily schedule, unless it conflicts with away time with family and friends.

What's the most unusual place you've ever litzed?

I've litzed a few puzzles while flying.  I'm not a fan of flying and litzing has been a nice way to distract me from running crash scenarios during the flight.

What motivates you to keep litzing so many puzzles?

There are still lots of puzzles to go, yet there is a definite end point.  As a community we're making good progress, and I will stick it out to the end.

You also did a great deal of work on The 21st Century Crossword Puzzle Dictionary with Kevin McCann, who said somewhere that the project would never have gotten finished if not for you.  Was that work similar in some ways to litzing, and did you get a similar sense of enjoyment or satisfaction from doing it?

The 21st Century Crossword Puzzle Dictionary was a huge data-crunching undertaking that required analyzing all the clues used during a multiple-year period from several major newspaper sources, looking for identical (or very similar) clues used to describe the same answer.  Each entry was typed into a database that eventually became the dictionary.  I set aside a few hours every day to slowly tackle the job, and after more than a year, it came to fruition.  The letter "S" took at least a month by itself!  The dictionary required more decision making than litzing (which is strictly copying like a scribe), but both are/were satisfying in a detailed, compulsive sort of way.

Do you have any tips for other litzers hoping to win or place in future litzing contests?

Litz several puzzles a day, every day, and your numbers will pile up just as quickly.


Thanks again, Mark—this is a great strategy not just for litzing, but for any other monumental goal that can seem daunting at times!

Today I am featuring two puzzles whose themes relate to sports team names.  These puzzles were only published a year apart, though their executions are surprisingly different!  The first was constructed by A. J. Santora.  A. J. Santora published many brilliant pre-Shortzian and Shortz-era puzzles, almost all of which were jam-packed with theme entries and lively fill!  This puzzle, which originally appeared on April 8, 1981, and was recently litzed by Jeffrey Krasnick, is an exceptionally well-done Santora opus.  It features an incredible 10 symmetrical, interlocking theme entries, some of which are triple-stacked, in a standard 15 x 15 grid!  Each theme entry is a word or phrase that contains a member of a major sports team; also, the theme clues cleverly hint at the locations of the teams hidden in the theme entries.  For example, "Man in an L.A. shelter?" leads to TAX DODGER and "Minnesota cots?" leads to TWIN BEDS.  The nonthematic fill is fantastic as well—I love the entries SLOBBERED, WINE PRESS, and SEXY!  My only small complaint about the puzzle is that the theme entry DEEP REDS contains REDS in the plural, while all the other theme entries contain a singular team member.  Nevertheless, this is an outstanding pre-Shortzian puzzle!  The answer grid (with highlighted theme entries) can be seen below: 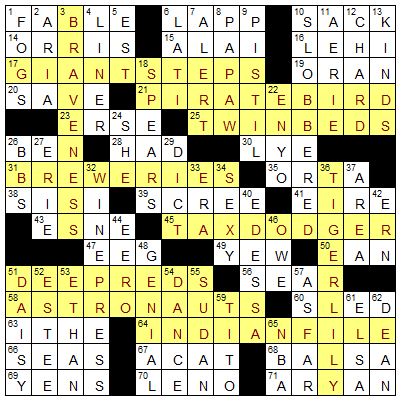 The second puzzle was originally published on June 25, 1982, and was recently litzed by Mark Diehl.  It was constructed Bert Rosenfield, another masterful pre-Shortzian constructor who published many puzzles with novel, interesting themes!  This puzzle also features 10 symmetrical, interlocking theme entries, though the sports team theme is much more subtle.  Each sports team in the puzzle is clued in a way that's not related to sports in all caps (probably to ensure that solvers don't miss the ingenious gimmick altogether!)—for example, BREWERS is clued as "COFFEE MACHINES," and BRAVES is clued as "STANDS UP TO."  This 74-word wonder also has some very nice entries in the nonthematic fill, such as UNMANLY and EYELASH.  The answer grid (with highlighted theme entries) can be seen below: 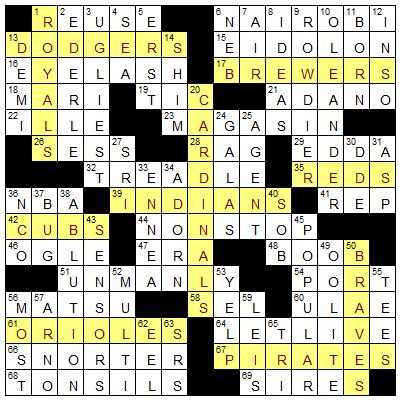 Both the Bert Rosenfield and A. J. Santora puzzles are exceptional—these puzzles' thematic similarity is a great example of how crossword constructors both think alike and think differently.  It will be very interesting to track the development and evolution of various themes over the years when the pre-Shortzian database is complete!

Today's featured clue originally appeared in the December 5, 1982, puzzle by Virginia P. Abelson, which was recently litzed by Barry Haldiman.  The clue for EMAIL was "Enamel."  I was really surprised to see the entry EMAIL appear in such an early puzzle—it must have been considered atrocious fill back in 1982!  In fact, according to Merriam-Webster, the term EMAIL as we know it was first introduced into our language in 1982.  Apparently, EMAIL means "enamel" in French . . . good thing we don't see that clue anymore!  According to the Ginsberg database, Maleska also used the clues "Bleu Louise" and "Blue-green color" around this time period.  In 1993, Maleska finally modernized and  used the clue "Telecommunicated messages."  Though this clue is a bit clunky, it was certainly progress!  Below is a picture of some blue French enamelry:

Posted by David Steinberg at 9:34 PM