Great news:  The 1987 puzzles have now all been proofread and are up on XWord Info!  Many thanks to Todd Gross, Beth Welsh, and Kristena Bergen for all their work on this monumental task.  Proofreading of the 1986 puzzles is already under way, and after the holidays, I'll be putting out a call for more volunteer proofreaders.

We're also now approaching 6,000 litzed puzzles!  I'm hoping we'll get there by the end of December, even with the holidays being a busy time for everyone.  In January, there will be another litzing contest with new prizes, at least one of which will go to a randomly drawn contestant.  More details soon!

In honor of the 1987 proofreading being finished, below are five more funny typos our proofreaders caught recently:


Today's featured puzzle was constructed by Joel D. Lafargue.  It was originally published on April 1, 1987, and was litzed by Barry Haldiman (or one of his former litzers).  This ingenious construction contains six theme entries, each of which must have the direction it reads in added to it in order for it to make sense.  For example,  26-Across (clued as "Go to great lengths?") is REVODNEB; since the entry reads from right to left, BACKWARDS must be substituted in.  The final answer should be interpreted as BEND OVER BACKWARDS.  I also really like the theme entries YGOLOHCYSP (REVERSE PSYCHOLOGY) and GNIKCARG (CRACKING UP)!  Some entries in the nonthematic fill are questionable (DOS A, NIOG, etc.), though most are very nice.  I especially like ENJOYED, SHERPAS, and KAL EL (which feels unusually hip for a pre-Shortzian puzzle—KAL EL didn't appear again until Liz Gorski reintroduced it in 2003).  Overall, this is a stellar pre-Shortzian April Fool's Day puzzle.  The answer grid (with highlighted theme entries) can be seen below; the complete puzzle is up on XWord Info. 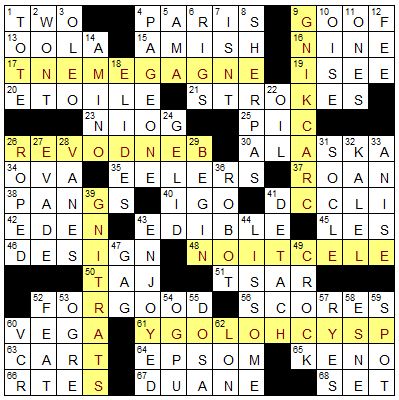 Today's featured pre-Shortzian entry is BROBDINGNAG, which, according to the Ginsberg database, has never been reused in a Shortz-era puzzle.  BROBDINGNAG originally appeared in the March 23, 1978, puzzle by Tepper (we don't know his or her first name for certain, but the constructor was probably Ruth Lake Tepper); the puzzle was recently litzed by Jeffrey Krasnick.  The clue for BROBDINGNAG was "Swift's land of 60-foot giants."  Webster defines Brobdingnag as "a land imagined by Jonathan Swift where everything was enormous."  I remember Lilliput from Gulliver's Travels, but I definitely don't remember Brobdingnag.  Below is a picture in Brobdingnag:

Posted by David Steinberg at 9:17 AM