We've just hit the 5,900 mark on the litzing thermometer (though I have to confess that we were at 5,897 and I just had to litz the puzzles that would make it an even 5,900!)!  Also, we're now sending out packets from 1977—the last Will Weng–edited puzzle was published on February 27, 1977, so we should be done with Maleska in the next few weeks.  When this project began, I assumed it would be at least a year or two before we reached Will Weng.  The speed at which the litzing is going amazes me!

On another note, the deadline for the contest I announced in last week's post is tomorrow at 11:59 P.M. Pacific time.  Be sure to get your entries in for a chance at winning a free Puzzazz book!

In other news, Barry Haldiman recently dedicated his 2012 litzma to Nancy Joline, who has published many innovative pre-Shortzian and Shortz-era puzzles.  He posted 13 of her best puzzles from the 1990s, most of which are from his personal collection.  Barry corrected me on the meaning of the term "litzma" as well—I had erroneously assumed that litzma was short for "litzing marathon."  It turns out that litzmas were named for Christmas, the time of year when Barry posts them on his website.  That makes a lot more sense!

The Pre-Shortzian Puzzle Project was mentioned in an unusual (but fitting!) way recently.  On his weekly crossword metapuzzle site Glutton for Pun, Erik Agard clued 29-Down in his most recent puzzle as "Help out at www.preshortzianpuzzleproject.com."  We all know the four-letter answer to this clue, of course (and no, it doesn't contain a rebus of OFREAD!).  The puzzle, titled "Butt Heads," is a lot of fun—it's definitely worth heading over to Erik's site to give it a go.

As the 1987 proofreading continues, our proofreaders have come across many more humorous typos.  Here's another hilarious pentad that should leave you riant:

And now for the puzzle.  Today's featured crossword was constructed by Maura B. Jacobson.  It was originally published on August 4, 1978, and was recently litzed by Mark Diehl.  This puzzle contains six theme entries (four of which are almost double-stacked) that relate to tennis but aren't clued as tennis terms.  For example, SERVICE LINES is clued as "G.I. queues" and FOOT FAULT is clued as "Podiatrist's concern."  Two others relate to mixology:  "What clumsy bartenders do" leads to  DROP SHOTS and "What the generous bartender did" yields MIXED DOUBLES.  The nonthematic fill includes many additional tennis-related entries, including WADE, ACED, and LETS, as well as the Scrabbly entries PROXY, OXALIC, and BIJOU.  Overall, this is an exceptional pre-Shortzian puzzle!  The answer grid (with highlighted theme entries) can be seen below: 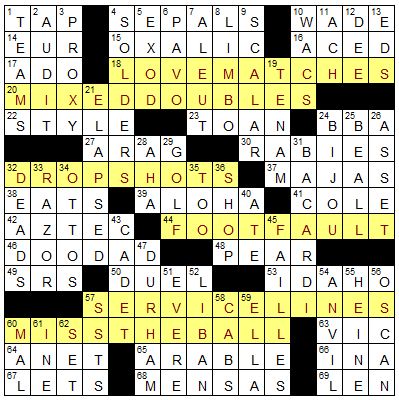 Today's featured clue originally appeared in the November 5, 1988, puzzle by S. E. Wilkinson, which was litzed by Barry Haldiman (or one of his former litzers).  The clue, which led to FOUR, read "Number of fingers per hand."  Maleska probably didn't count thumbs as fingers since they have two phalanges, while all other fingers have three.  Interestingly, Will Shortz ran the clue "Finger count" for TEN in one of my puzzles.  Webster seems to support both clues—it defines FINGER as "Any of five terminating members of the hand: a digit of the forelimb, especially: one other than the thumb."  If you have an opinion on this, please comment—if there are enough responses, I'll post a recap next week on which clue people thought was more accurate.  In the meantime, below is an anatomical diagram of the hand:

Posted by David Steinberg at 9:43 PM