As a very special end-of-year surprise, I'm delighted to present an interview with Jim Page, a very prolific pre-Shortzian and Shortz-era constructor.  Jim published more than 70 puzzles under Will Weng and Eugene T. Maleska, as well as 68, to date, under Will Shortz.  Jim's themelesses are some of the toughest out there, and his themed puzzles always have a creative and clever twist.


Today I'm featuring one of Jim's finest Sunday puzzles, "Playing with Matches."  It was originally published on July 3, 1983, and was litzed by Barry Haldiman.  The puzzle contains nine symmetrically interlocking theme entries that relate to joining things together.  What really makes this puzzle stand out, however, is the cluing gimmick—each theme entry is clued as two examples of the things being joined right next to each other.  For example, "Platterdisk" leads to STUCK RECORDS and "Beannoodle" leads to BUMPING HEADS.  Jim lists a few more brilliant theme clue/entry pairs in his interview.  The nonthematic fill is very nice as well—I especially like the entries LAKE MEAD, BEDAUB, and MIMOSA!  I don't think I've come across the entries DESAND (clued as "Rid of grit") or BEVANS (clued as "British statesman and family").  Nevertheless, this is an outstanding pre-Shortzian puzzle by a masterful constructor!  The answer grid (with highlighted theme entries) can be seen below: 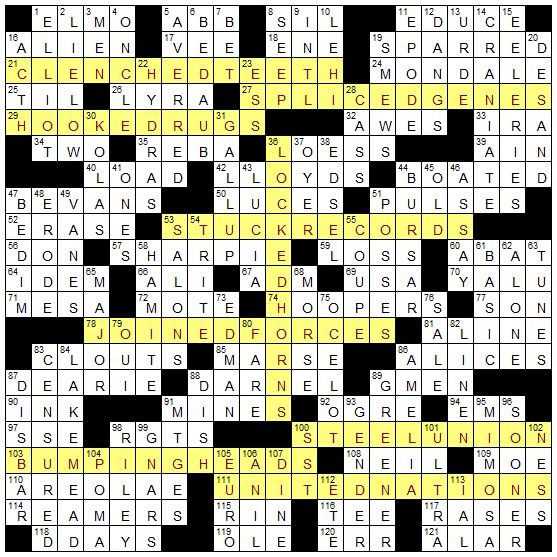 Today's featured pre-Shortzian entry is URDE.  URDE originally appeared in the above puzzle and was clued as "Like some heraldic crosses."  According to the Ginsberg database, URDE has never been reused in a Shortz-era puzzle; however, XWord Info shows that it has appeared in several other pre-Shortzian puzzles from several years later.  Webster lists urdé as a variant of urdée, which it defines as "[of a cross] having each arm expanding at the end into a form like a lozenge with slightly concave edges."  Wow—that's a mouthful of a definition for such a short word!  Below is a picture of an urdé:

Posted by David Steinberg at 2:26 PM