Happy New Year—there's lots of great news to report since 2012!  First, I'm thrilled to present an in-depth interview with Mel Taub, the pre-Shortzian and Shortz-era constructor who served as interim crossword editor of The New York Times for more than 2½ months after Maleska's death before Will Shortz took over.  Mel's thoughts and experiences are fascinating—to read the interview, click on the link above or here.

In other news, the second litzing contest is now under way and will run through the end of February.  New litzers are welcome, and anyone who litzes at least one week's worth of puzzles will be eligible for a drawing to win a year's subscription (or renewal) to XWord Info!  There are other prizes as well, including e-books from Puzzazz—to read more about the contest, click here or on the Contest Totals tab above.

I'm hoping that by the end of February, we'll have reached the halfway point—8,113 puzzles!  We started at 6,198 puzzles and, just four days later, have litzed 138 puzzles, bringing the total as I write this to 6,336!

I'm also happy to announce that we're now litzing puzzles from the Will Weng era—we'll have eight more years of those before reaching the first pre-Shortzian editor, Margaret Farrar!

A couple of weeks ago I was thrilled to receive an e-mail from Maureen Hathaway, a daily New York Times crossword solver who was the second-place Division E winner at the 2007 American Crossword Puzzle Tournament.  Maureen offered to send me some of her old pre-Shortzian puzzle books, suggesting that if I already had copies of these books, I could sell them and use the money to help support the project.  The books arrived on December 31; it turned out that I did indeed already have six of them, which Stan Newman had generously given me last year.  Since the duplicates are in excellent condition, though, I'm planning to sell them and use the proceeds to buy other pre-Shortzian puzzle books that could help identify the still-missing authors of many puzzles.  The seventh book Maureen sent was new to me and is very cool:  It's called The New York Times Crossword Puzzles of the 1950's and is actually a pad of paper!  There's one puzzle on each sheet, with the solution on the back of the sheet, and the pad also includes a removable copy of the very first New York Times crossword!  Thanks so much again, Maureen!

Our first Litzer of the Month for 2013 is Robert Warren Jones, a prolific litzer who litzed more than 200 puzzles in just two months!  Though he's been busy with other things lately, he plans to get back into litzing again soon.  To read more about Bob, click here or on the Litzer of the Month tab above.

I've received a couple of inquiries lately from people wanting to contribute financially to the Pre-Shortzian Puzzle Project.  Donations are always welcome and will be used to help offset the project's expenses and further its goals.  I've created a new Contribute page, which provides information on how to donate to the project.  You can reach it by clicking on the Contribute tab above or on the PayPal button in the righthand column, which links to the Contribute page instead of to PayPal directly.

Today's featured puzzle, "Tom Swifties Redivivus," was constructed by Mel Taub.  "Tom Swifties Redivivus" was originally published on December 11, 1988, and was recently litzed by Mark Diehl.  It features a mind-blowing 16 symmetrically interlocking theme entries (and 2 additional asymmetrical bonus theme entries) in a 21x grid that are clued Tom Swifties–style.  For example, BUT IS IT ART is clued as "'____,' Tom said abstractly" and FIND AN APARTMENT is clued as "'___,' Tom said flatly."  When I was a Cub Scout briefly back in elementary school, I received Boys' Life (the Boy Scouts magazine) and remember that the only part that interested me was the page devoted to jokes and Tom Swifties.  Since then, I've come across several Tom Swifties puzzles in the Shortz era but never one with this many theme entries interlocking so elegantly!  In his interview, Mel is quite modest about this crossword construction feat, stating that he merely sorted out the theme entries and came up with a suitable diagram.  Amazing!  And Mel sure did fill his suitable diagram very nicely—I especially like the colloquial LATISH; other nice entries in the nonthematic fill include FLIRTY, IN THE ACT, BULKY, and IMPINGED.  I'm surprised that neither BULKY nor FLIRTY has been reused in the Shortz era—even though their letter patterns are tricky, you'd think they would have appeared at least once.  All in all, this is an exceptional Maleska-edited Sunday puzzle and a paradigm of interlocking theme entries.  The answer grid (with highlighted theme entries) can be seen below; the complete puzzle can be seen on XWord Info. 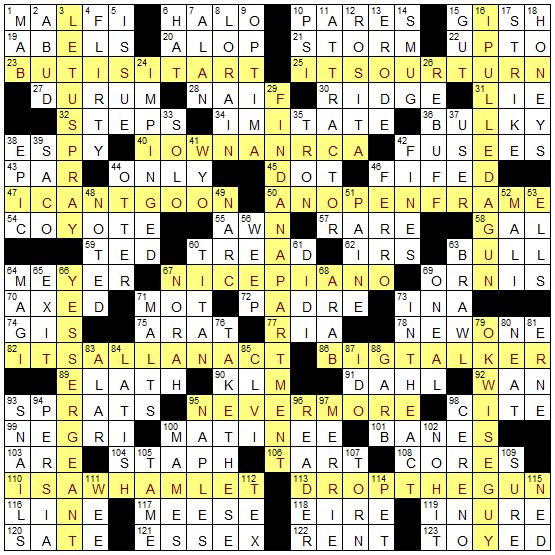 Today's featured pre-Shortzian clue appeared in the February 26, 1978, puzzle by Kenneth Haxton, titled "Fire and Ice," which was litzed recently by Mark Diehl.  The 1-Across clue read "Rid of ice."  The answer?  DEICE!  This has to be one of the worst clues I've seen so far in a pre-Shortzian puzzle—most of the answer itself is repeated in the clue!  The puzzle (which is quite well constructed) has good cluing everywhere else—it's a mystery to me why Maleska chose one of the worst clues possible to open such a fine Sunday puzzle.  I did notice, however, that Maleska didn't reuse that clue (at least in the puzzles we've litzed so far) for DEICE—in more recent puzzles, he generally stuck to "Apply antifreeze" or "Free from frost," both of which are clever, alliterative clues.  I'm guessing he got a lot of mail about the "Rid of ice" clue!  Below is a picture of a plane being deiced:

Posted by David Steinberg at 2:54 PM