Reminiscences of Constructor Fred Duda by Al Weeks, Second Litzing Contest Under Way, Over 6,600 (and in 1975!)

This week I'm delighted to present a profile of pre-Shortzian constructor Fred Duda written by his longtime friend Al Weeks.  A few weeks ago Al's wonderful reminiscences of Alfio Micci appeared here; if you haven't read his piece, be sure to check it out.  According to my (still incomplete) records, Fred published two crosswords in The New York Times when Eugene T. Maleska was editor, the first on October 18, 1986, and the second on November 8, 1986. 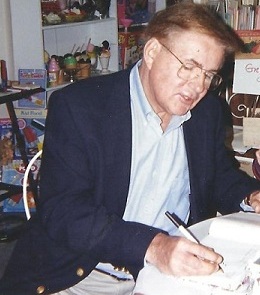 When one of Fred's crosswords was first published in a large paperback collection of crosswords, I was the person who brought this event to his attention.  The puzzle, titled "Star Fare," No. 144, was  published in Simon & Schuster's Super Crossword Book (edited by Maleska and Samson, 1992).  The puzzle—from 1-Across to 131-Down—was one of his best.  One clue:  "Fare for Miss Duke?"  Solution:  "Pattycakes."
That was one book of crosswords containing a Duda puzzle.  But I remembered that Fred had appeared in other puzzle anthologies—pardon me, constructors, anas.  In one of those, under the editorship of Margaret Farrar, Fred punned on movie titles.  "To Catch a Thief" became for Fred "To Catch a Fief," a medieval, pre-Hitchcock version.
The creator of such gems was born in semirural New Jersey into a first-generation Polish family.  He was the only offspring to go to college (at his expense—he worked his way through) and to receive a graduate M.A. degree (in Library Science).  From then on, for him it was per aspera ad astra.  Fred wound up heading personnel management for one of the world's largest libraries, Butler, at Columbia University.  He was there in the roaring 'Sixties when radical students broke up classes and wrecked furniture and books.  Calm, cool, and collected, Fred was one of those administrators on the chaotic campus who personally helped to calm things down—from the very steps of the library.  Eventually students returned to their classes and took out books as things returned to normal.  Amid the mayhem, people recalled how Fred had been so instrumental at Butler in protecting all the collections.  He didn't get much sleep in those days.
In the 55 years we were friends, I saw that in his spare time Fred had numerous hobbies.  His favorite—besides sailing his Sunfish during summers on Nantucket Sound or catching up on the latest Broadway shows as a theatergoer—was solving, and eventually creating, large-size crosswords.  Needless to say, his greatest diversion as a solver came on Sundays.  This was when he tackled The New York Times Magazine's premium challenge.  The last Across grid number might run over 130.
A great inspiration to Fred in transitioning into construction was his friendship with Alfio Micci.  Fred and Alfio would put their heads together during summers on Nantucket, as well as during winters in Nokomis, Florida, where Alfio and his wife, Martha, vacationed near Fred's own retirement town of Sarasota.  All four of us became close friends (please see the previous portrait of Alfio Micci).  On a swatch of Nantucket sand, known quaintly as "Teacher's Beach," Fred and Alfio would deeply discuss puzzle construction.  Al soon realized that Fred had tremendous talent with crosswords.  Like Diaghilev promoting Nijinsky in the field of ballet, Alfio eagerly lent Fred a hand in taking the publishing route for his crosswords, which was no easy achievement.  Somewhat later, Fred took the plunge on his own.  His puzzle was accepted and published in the Times.  He also published two books, one called Bib-Triv, the other a weighty text on library administration that became a college textbook standby.
Fred, at 75 years of age, passed away from lung cancer last September.  I began to wonder why I had only one of his puzzles on my bookshelf.  Too, none showed up in his own bookcases.  Fred was a very modest person.  He made no attempt to collect his puzzles.  His creations were difficult to construct—I myself am capable of constructing only mini-puzzles for a local condo association—and were unique in their wit and inventiveness.  They certainly deserved a honored place on the constructor's bookshelf.  I wanted to recall them for memory's sake and to share them with his friends who hadn't known about Fred's "sideline."
So last fall I went searching online.  Via a certain cue in Google, up came the URL for one David Steinberg.  Not knowing who he was, I soon discovered that he knew a lot about crosswords and was himself a talented constructor.  Moreover, he eagerly volunteered to track down any and all Frederick Duda puzzles.  Such generosity by a stranger online!  Later I was surprised and pleased to find out that this helpful, skillful person was a "mere" 16-year-old "stripling," as we used to say (an understatement—young Steinberg is a virtual prodigy).  David found a couple of Duda puzzles; thanks to him, I now have a sort of memorial to Fred in the form of these unique creations.
Maybe Fred can look down from heaven and be permitted a show of temperate pride over his timeless achievements here below.

Thanks so much again, Al, for this lovely tribute to Fred.

As we continue our litzing, more and more gems like the ones Fred and Alfio constructed are coming to light.  The second litzing contest is already well under way and, like the first contest, has significantly increased the rate at which litzed puzzles are coming in!  This morning Mark Diehl put us over 6,600 on the litzing thermometer, as well as into 1975 with the puzzles being sent out for litzing!  As I write this, we're at 6,621 puzzles—that's 423 more than the 6,198 we started with on January 1!  Our goal is 8,113 litzed puzzles by the end of February, so we're definitely on track to achieve that.  If you haven't ever litzed and would like to try it out, contact me and I'll send you some puzzles—we always need more litzers!  If you have already litzed but have been taking a break for a while, now would be a great time to litz another batch, especially since when you litz one full week, you become eligible for a year's subscription (or renewal) to XWord Info!  More information about the contest can be seen on the Contest Totals page.  Thanks again, everybody!

Today's featured puzzle, which was edited by Will Weng, was constructed by Sidney L. Robbins.  It was originally published on February 25, 1977, and was recently litzed by Jeffrey Krasnick.  Sidney published at least 150 crosswords under Weng, Maleska, and Shortz and was renowned for his far-from-ordinary Monday and Tuesday puzzles.  One unique feature common to many of his constructions (particularly the pre-Shortzian ones) was a nonthematic 15-letter entry running down the center of the grid.  For example, his puzzle published on September 17, 1990, included the theme entries HAIR RAISER, SCISSORING, CLIP JOINTS, and BARBERSHOP.  DISSATISFACTION, a completely unrelated 15-letter entry, ran down the center of the grid, crossing two of the theme entries.

This fascinating Sidney L. Robbins construction, published just two days before Eugene T. Maleska became editor, might have been a humorous tribute to Will Weng but could simply have been a retirement-related theme.  1-Across is WILL, and its symmetrical counterpart is WEND, which is only one letter different from WENG.  The constructor probably chose not to use WENG, since the only way to clue it would have been to reference Will himself, which this puzzle artfully avoids doing.  (WILL is clued as "Where there's a ___ . . . .")  The long theme entries and their clues include SIGNS OF SENILITY ("Infirmity, forgetfulness, etc."), RETIREMENT PARTY ("Traditional send-off"), PARTING PRESENTS ("Gold watches for departing war-horses"), and FAREWELL ADDRESS ("Speech of a sort").  There are several other entries in the fill that might also be thematic:  QUIT, REFORM, WISE, and EXIT.  Perhaps these are merely coincidences, though.  Nevertheless, this is a very historically significant pre-Shortzian puzzle; the answer grid (with highlighted theme entries) can be seen below: 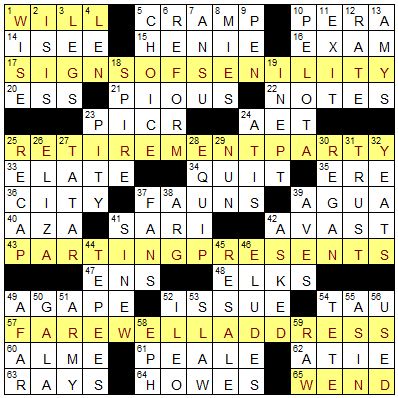 Today I am featuring two bizarre pre-Shortzian entries that appeared in the same puzzle.  The puzzle, a product of master constructor Jordan S. Lasher, was originally published on June 28, 1977, and was recently litzed by master litzer Mark Diehl.  The first entry, TU-WHIT TU-WHOO, was clued as "Owl sounds"; the second entry, HASENPFEFFER, was clued as "Rabbit stew."  Not surprisingly, neither of these entries has been reused in a Shortz-era New York Times puzzle, though the Ginsberg database does show that HASENPFEFFER was used in a CrosSynergy puzzle from 2002.  TU-WHIT TU-WHOO stood out to me the most; I was shocked to discover that this entry is actually in Webster's, defined as "the cry of an owl"!  Webster goes on to note that the origin of the entry was "imitative" and that it was first introduced into our language around 1595.  Webster defines hasenpfeffer as "a highly seasoned stew made of marinated rabbit meat."  It comes from the German words hase (meaning "hare") and pfeffer (meaning "pepper") and was first introduced into our language around 1892.  Yuck!  Below are pictures of an owl and of hasenpfeffer:

Posted by David Steinberg at 1:07 PM