Last weekend I was out of town at the Fifth Annual Bay Area Crossword Puzzle Tournament, aka BAC Fill, which was in Oakland this year.  BAC Fill was a super fun event, organized once again by our very own Andrew Laurence.  It was great being able to get together with so many puzzle people, quite a few of whom were litzers!  What made this event even more special, though, was the surprise guest:  Manny Nosowsky!  I've always wanted to meet Manny, a constructor who has had 254 New York Times puzzles published in the Shortz and Maleska eras.  It was truly an honor, and Elissa Grossman, director of Crosswords LA, was kind enough to take this photo of fellow constructor Andrea Carla Michaels and me with Manny:


After the tournament, I went to Berkeley for a few hours.  At a local bookstore I happened to find a copy of a Margaret Petherbridge–edited pocket book of daily puzzles printed in April 1943!  Though the book won't be useful for the Pre-Shortzian Puzzle Project, because the puzzles weren't reprinted from The New York Times, the book is still fascinating!  The clue headers read Horizontal and Vertical rather than Across and Down.  In addition, the book has a very interesting note at the beginning:  "In order to cooperate with the government's war effort, this book has been made in strict conformity with WPB [War Production Board, an organization established by Roosevelt in 1942] restricting the use of certain materials."  But perhaps the biggest surprise of all was discovering an asymmetrical double tri-stack from this early in crossword history!  The puzzle, constructed by Norton Curtis, is filled with obscurity and two-letter words but is nevertheless way ahead of its time.  The answer grid (which I litzed) can be seen below: 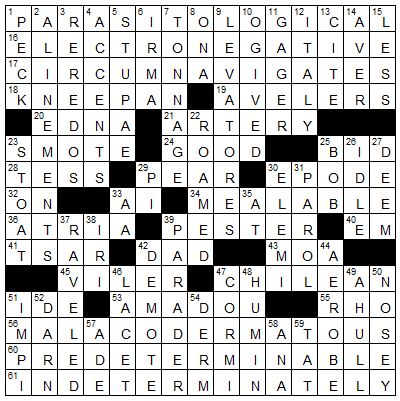 Today's featured pre-Shortzian New York Times puzzle was constructed by Ernst Theimer.  It was originally published on January 12, 1990, and was recently litzed by Alex Vratsanos.  This ingenious construction contains six symmetrically placed theme entries in which the second half of a word or phrase beginning with the word TURN is reversed.  In addition, the puzzle has a witty cluing twist:  TURN TURTLE, for example, is clued as "How to make a tortoise capsize," and TURNCOAT is clued as "How to make a jacket for a traitor."  The nonthematic fill is very solid—I especially like the entries SPANGLES and SECRETS.  I'm not particularly fond of ORNERIER, though it's certainly a legitimate entry.  Overall, this is another beautiful Ernst Theimer puzzle that goes above and beyond the traditional Maleska-era construction.  The answer grid (with highlighted theme entries) appears below: 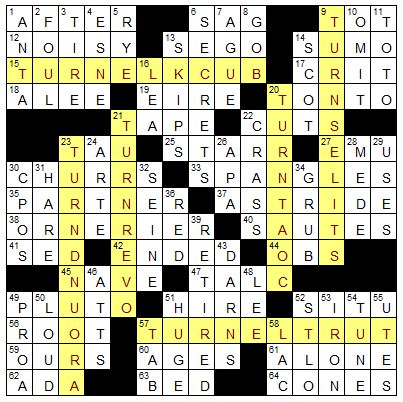 Today's featured pre-Shortzian entry is MOLL-BUZZER.  According to the Ginsberg database, MOLL-BUZZER has never been reused in a Shortzian puzzle.  MOLL-BUZZER originally appeared in the August 16, 1984, puzzle by Tap Osborn, which was recently litzed by Mark Diehl.  The original clue for MOLL-BUZZER was "Certain pickpocket."  Webster defines a moll-buzzer as slang for "a pickpocket whose victims are women."  I doubt moll-buzzer is used much today—I didn't even know there was a word for a pickpocket who targets women!  Below is a picture of an avian moll-buzzer: 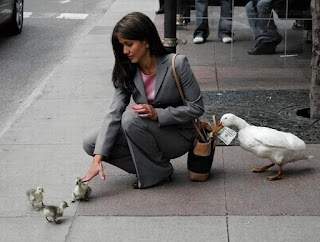 Image courtesy of An American Living and Traveling in the Philippines.
Posted by David Steinberg at 9:43 PM