I'm pleased to announce that the litzing has continued to progress steadily over this past week.  Late Friday night, Mark Diehl sent in 35 puzzles, putting us over 10,100!  While preparing a new batch for Mark the next morning, I sent out the first puzzles from 1966!  Unfortunately, nearly all the daily puzzle authors are missing from 1966; with a few exceptions here and there, they won't appear again until February 1964.  The missing daily puzzle authors didn't slow down our "litzing juggernaut" in the least—Sunday night, Mark sent in another 14 puzzles!  On Tuesday, I litzed a reassigned batch from 1982, and on Wednesday, Denny Baker sent in 7 puzzles, which were followed by 6 more from Mike Buckley.  On Thursday, Martin Herbach sent in 34 more puzzles, putting his litzed total at more than 500—congratulations again, Martin!  And Todd Gross proofread nearly two more months of puzzles—awesome progress!  Thanks so much again, everyone!

In other news, recently Miriam Raphael's sister Laura Bobrow discovered a very interesting article about crossword history, which she kindly sent my way.  The first page of the article focuses on Arthur Wynne and the very early crossword years; the second page (which can be accessed via a tiny link at the bottom of the page reading "History of the Crossword Puzzle Part 2") goes into detail about crosswords from the 1920s and contains some information that I haven't seen elsewhere; and the third page (accessible via a similar link on the second page) lists popular crossword publications at the time the article was published back in the early 1980s.  All in all, this article was a fun, informative read.  Thanks, Laura and Miriam!

On a related historical front, Martin Herbach noticed that many of the puzzles he was litzing were constructed by William Lutwiniak, so he did a little Googling and found some very interesting links.  I've added them to the ones that were already on the Pre-Shortzian Constructors page, so if you'd like to read more about this fascinating NSA cryptanalyst who was on an NSA bowling team and who is now buried in Arlington National Cemetery, click on the tab above or here and scroll down to the links.  Thanks so much again, Martin!

Just a reminder:  Only eight more days till the first Pre-Shortzian Puzzle Project metapuzzle is released!  I'll be writing about it more next Friday, and the metapuzzle itself will be released on Saturday, June 29, so mark your calendar if you want to give it a try!

Now that we're litzing puzzles from 1966, I searched for a good graphical representation of that year.  As with other years during the 1960s, 1966 was in many ways a dark time.  Rather than focus on the Vietnam War, race riots, or other major political events from that year, I thought many crossword fans might appreciate a photo of the science fiction television series Star Trek, whose very first episode aired in 1966: 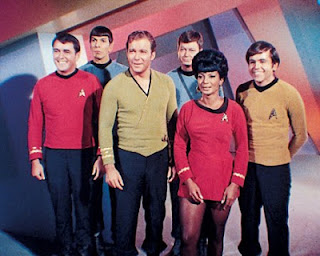 Today's featured puzzle, "Rhymes from Way Out," was constructed by Edward J. O'Brien.  I've come across several groundbreaking Will Weng–era Sunday puzzles by this constructor—he was a master at getting theme entries to interlock!  (Reverend O'Brien also compiled the 1975 Compendium of Constructors, which has been—and will continue to be—very useful in determining the full names of Weng- and Maleska-era constructors.)  This featured opus was published on September 28, 1969; it was edited by Will Weng during his first year as editor and was recently litzed by Mark Diehl.  The brilliant construction features 16 symmetrically interlocking nonsensical rhymes, many of which are quite amusing (much like entries in Trip Payne's Something Different puzzles).  But what truly makes this puzzle stand out is the tri-stack of 23-letter theme entries at the center of the puzzle—I've seen very few puzzles with tri-stacks of thematic 21-letter entries, and I believe this is the only New York Times crossword, Shortz or pre-Shortz, to accomplish this feat.  (There was a 1974 23-letter triple-stack, but it was themeless.)  My favorite rhymes in terms of humor are WHITE COLLAR DOLLAR HOLLER (clued as "Clerical union's demand for a raise"), A COBBLE JOB'LL HOBBLE ("Forecast for a poor shoe repair"), and NO ROE ALSO ("Out of fish eggs, too").  And who doesn't love HEMISEMIDEMIQUAVER SAVER ("One who keeps 64th notes")?

Outside of the theme, the fill is an OMNIUM gatherum of liveliness, crazy partials, and esoterica.  Some of my favorite nonthematic entries include REACH FOR, SANTA FE, ECONOMICAL, SENSIBLE, and TEE-VEES (cleverly clued as "Living-room eyes").  Among the entries that made me say OH MY were EMAN ("Relative of a Cockney 'ero"), ANY SUIT ("Hearts, clubs, whatever"), BARRETTS OF ("___ Wimpole Street"), ELSENE ("Flemish name of Ixelles"), and SPLADS ("Chair backs: Var.").  Do you think entries like EMAN justify the addition of all "Cockneyisms" to constructors' word lists?  I'd personally be against adding arbitrary Cockneyisms to my word list, though I'm sure they could come in handy in quad- and quint-stacks—please feel free to comment if you have an opinion on this matter.

Even with these entries (and plenty of others that would make Amy Reynaldo's Scowl-o-Meter go through the roof!), this is a remarkable pre-Shortzian puzzle that I'm guessing would only have been published under Will Weng!  The answer grid (with highlighted theme entries) can be seen below: 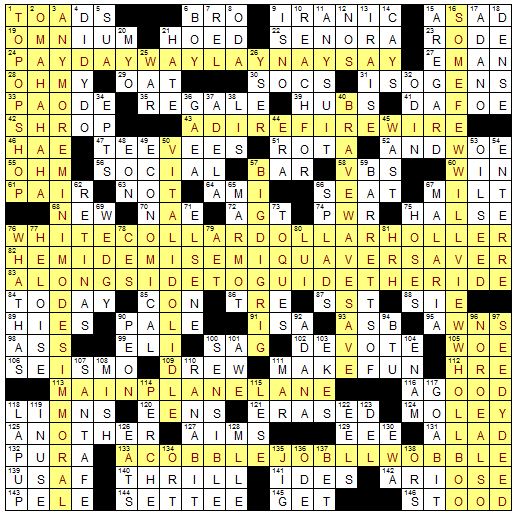 If you thought the two recently posted typographical entries ETAOIN SHRDLU and HELLBOX were unusual, buckle your seat belts—I've now assembled three pages of cool-sounding-but-unusual pre-Shortzian entries!  Today's featured pre-Shortzian entry is SJAMBOKS, which, according to the Ginsberg clue database, has never been reused in the Shortz era (SJAMBOK, however, did appear later on in a Maleska-edited puzzle from 1990).  SJAMBOKS originally appeared in the August 14, 1970, puzzle (constructor unknown), which was edited by Will Weng and recently litzed by Nancy Kavanaugh.  SJAMBOKS was clued as "African hide whips"; Webster defines a sjambok as "a heavy leather whip often of rhinoceros hide."  It goes on to mention that sjambok comes from the Afrikaans sambok, which comes from the Malay cambok (large whip), which comes from the Hindu cābuk, which ultimately comes from the Persian chābuk.  Webster notes that a sjambok is comparable to a chawbuck.  I'm impressed by how rich an etymology the word sjambok has!  Below is a picture of a sjambok:

Posted by David Steinberg at 5:02 PM