Tomorrow, June 29, will be the first anniversary of the official start of the Pre-Shortzian Puzzle Project!  I can hardly believe that this all began just twelve months ago when I wrote the first post and we were litzing puzzles from 1992.  Now I'm writing the 70th post and we're in 1966—and at 10,237 puzzles litzed, we're nearly two-thirds of the way done!  Awesome job, everybody—at this rate, there's an excellent chance that by next year at this time, all the litzing will be complete!


In celebration, I've created the Pre-Shortzian Puzzle Project's First Anniversary Metapuzzle Contest—Metaleska!  You'll be able to access this free 23 x 23 cranium crusher tomorrow at 12 noon Pacific Time on XWord Info, thanks to Jim Horne!  In a special minipost tomorrow, I'll link to the exact page; you'll also be able to link to the puzzle from XWord Info's home page.  There will be a file of detailed instructions and two different formats of the puzzle:  Across Lite, for those of you who prefer to solve that way, and PDF, if you'd rather print out the puzzle.  Metaleska is offered without charge to everyone—litzers, solvers, and fans of the Pre-Shortzian Puzzle Project (though contributions to the project are always welcome!).  There will be crossword-friendly prizes for the first correct entry and for two random correct entries as follows:

Random Prize #1:  Word.: 144 Crosswords That Prove It's Hip to be Square, by Natan Last—a compendium of crosswords written by talented young constructors

So sharpen your pencils (or limber up your typing fingers) and see if you can conquer Metaleska!  All entries must be received by 11:59 p.m. (one minute before midnight) Pacific Time on Saturday, July 6.

In other news, some time ago I contacted pre-Shortzian and Shortz-era crossword legend Bernice Gordon about doing an interview for this blog.   Bernice is 99 and has been an active New York Times constructor since the Margaret Farrar days!  I published that interview on April 19, and you can read it by clicking here or on the Pre-Shortzian Constructor Interviews tab above and then scrolling down.

While I was corresponding with her about the interview, it occurred to me that a collaboration between us might be not only fun but historic.  At 99, Bernice is the oldest New York Times constructor; at 16, I am currently the youngest (though I wasn't the youngest ever to publish a crossword in the Times—pre-Shortzian constructors Artie Bennett and Mike Miller were both younger than I was—14 1/2—when my first puzzle was published, as was Shortz-era constructor Ben Pall).  Bernice was excited about the idea, so we began constructing the puzzle that appeared on June 26 in the Times.

Because of the 83-year age difference, our collaboration was very interesting.  Bernice knew many older things that I didn't, and she wasn't familiar with some modern terms I used.  Deb Amlen wrote up the puzzle and interviewed us about the collaboration for Wordplay; to read her piece, click here.  In addition, a reporter from The Philadelphia Inquirer contacted me and Bernice about the collaboration and wrote about it in an article, which you can read here.  I was very honored to collaborate with such a crossword legend, and getting to know Bernice has been delightful!  I'm hoping we'll be able to meet each other in person in the not too distant future.

Back to the project:  We've made a lot of progress this week!  On Tuesday, Martin Herbach sent in 35 puzzles, putting us over 10,200!  Then Wednesday, Denny Baker sent in 7, and a few hours later, Howard Barkin sent in 21.  Todd Gross finished proofreading another month of 1982 puzzles and sent in 10 more proofread puzzles from his final month of that year.  Thanks so much, everyone!  Although the 1982 puzzles will likely be completely proofread by the end of this month, I'm going to hold off on having them posted on XWord Info until Metaleska is over, just so no one gets confused (you'll see why when you read the instructions tomorrow!).


Today's featured pre-Shortzian puzzle, "For the Distaff Side," was constructed by Sidney Lambert.  It was originally published on March 26, 1967, and was recently litzed by Denny Baker.  This Margaret Farrar–edited puzzle doesn't have a particularly gimmicky theme, though it does contain nine solid theme entries and the reveal WOMAN'S WORK (cleverly clued as "It's never done").  Each theme entry, such as SCRUB TEAM, starts with a stereotypical chore women did during the time period in which this puzzle was published.  The puzzle struck me as being particularly sexist.  There were plenty of women, such as Margaret Farrar herself, who achieved great things back in the 60s—I don't see the entry CROSSWORD EDITOR anywhere in the grid!  Nevertheless, this puzzle is very interesting historically in that it shows how society viewed women.  The nonthematic fill looks nice on the whole.  On the positive side, the puzzle contains SWORDS crossing SHEARS, TEAR GAS, HORNET, and TWINGE.  Also, the clue "Pieces of music." (SONGS) is reused for GLEE, ALTOS, and NOELS, which I thought was a nice touch.  I do have a few BEEFS ("Complaints: Slang."), though.  The puzzle contains ANDIRON (the IRON part of which is distracting), the partial ARM IN ("___ arm") that repeats part of the answer in its clue, and the lesser-known goddesses SPES and HESPER (the latter of which is also a less-common poetic form).  In sum, this is a historically significant Sunday puzzle that feels like an accurate representation of the average Sunday puzzle from its time period.  The answer grid (with highlighted theme entries) can be seen below: 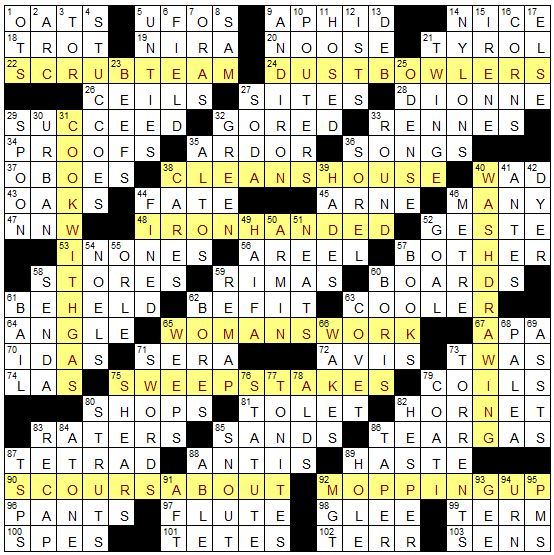 I've been on the lookout for clever pre-Shortzian clues from the early Weng era.  In most puzzles, they're few and far between, but I noticed that Weng always managed to throw in at least one thought-provoking clue per puzzle.  Here are some of my favorites:

The 1/17/71 clue is, in my opinion, the coolest clue/answer pair of the bunch!  Below is a picture of a person whose living would definitely depend on net income:

Posted by David Steinberg at 7:08 AM