Over 10,000 Puzzles, Metapuzzle Update, and Will Weng Crossword Trends

I'm thrilled to announce that we passed the major milestone of 10,000 litzed puzzles this week!  Friday night after the last blog post went up, Todd Gross sent in 7 puzzles; late the next day, Mike Buckley sent in another 7.  On Sunday, Denny Baker and Todd McClary each sent in 7 puzzles, and Mark Diehl sent in 28.  Yesterday Alex Vratsanos sent in 10, and Mark sent in another 14.  Just a few hours ago, Denny sent in 7 more puzzles (putting himself over the 500 mark!); shortly thereafter, Alex sent in 6 more, putting himself over 100 and us over 10,000!  Congratulations, Alex, on being the one to get us past this major milestone!  And thanks so much, everybody, for all the awesome litzing—we're definitely on the downhill stretch now, and I'm looking forward to seeing how much terrific progress we make over the summer!

On the proofreading front, Todd Gross finished a month of 1982 puzzles this week and is busy on another—I'm hoping to have 1982 completed by the end of this month, if not before.

At the end of last year, I dropped a hint about a forthcoming 23x Pre-Shortzian Puzzle Project metapuzzle.  Over the past few weeks, I've finalized the concept and found all the theme entries (which involved writing a specialized Java program); I also designed and filled the grid.  I'm currently working on writing the 172 (!) clues, which will definitely keep me busy for the next few days!  The metapuzzle should be ready in time for the project's first official anniversary on June 29.  I'll post more details on the blog next week, so be sure to check in!

Now that I've reviewed almost all the Will Weng–era puzzles and we've started litzing into the Farrar era, I figured it would be a good time to elaborate on trends I've noticed in Weng's editorial style.  First and foremost, Weng was willing to take risks as an editor.  He published the whole gamut of gimmicks, ranging from nudist-camp puns to extra squares outside of grids to thematic images formed by block arrangements.  Weng was willing to bend the rules slightly for innovative gimmicks and to publish clever themes that had slight inconsistencies.  I've encountered several 15x puzzles with 50+ blocks and handfuls of others that have asymmetric theme-entry arrangements and/or grids.  Nevertheless, almost all thematic Weng puzzles boasted incredible theme density and interlock.  Jordan S. Lasher was one of the many Weng-era constructors whose puzzles were exceptionally theme-dense—one of his masterpieces contained bi-stacks of 15-letter theme entries!  And A. J. Santora constructed some puzzles with phenomenal theme-entry interlock—some of his dailies contained more than 12 theme entries!

The thing that really differentiates Will Weng from Eugene T. Maleska, however, is that the puzzles Weng edited reflected the time period in which they were published.  Weng published puzzles about man landing on the moon, national concerns in the 1970s, the 1972 chess championship, the 1972 election, and, of course, hippies!  One current (but somewhat bizarre) 1971 daily included the theme entries THIS YEAR (clued as "1971"), LAST YEAR ("1970"), and LEAP YEAR ("1968").  Weng revolutionized crossword clues as well.  He not only published puzzles without periods after each clue but also started to mix clever, punny clues in with the vast sea of straight-definition clues, such as "His contracts had escape clauses" for HARRY HOUDINI and "Visitor from outer space" for METEORITE.  This new style of cluing flourished throughout the Maleska era and is still in use today.

Weng's willingness to publish unusual themes with such incredibly high theme densities did have a drawback, though.  The nonthematic fills of themed Weng puzzles tended to be significantly iffier than those of both the small selection of Margaret Farrar–edited puzzles I've seen and the Maleska puzzles.  Weng's puzzles were riddled with pre-Shortzian crosswordese, flat-out obscurities, lengthy partials, awkward word forms (such as OUTMIME), and contrived multiword phrases.  One multiword nonthematic phrase, MORE LARKS AROUND ("What a birdwatcher might want"), is so implausible that it's almost "risible"!  I can't image this entry appearing anywhere other than Trip Payne's Something Different puzzles these days!

Even though Weng puzzles frequently had fill problems, I've had a blast looking through them over the past few months and have learned a lot about how crossword puzzles evolved during his groundbreaking editorship.  I love how unpredictable looking through Weng puzzles is—I never know what unusual gimmick will crop up next (unless, of course, a litzer has mentioned a certain puzzle in his or her e-mail!).  I'll miss Weng's sense of humor as we continue into the Farrar era, but I'm also really looking forward to seeing how the Farrar-edited puzzles compare.

Today's featured puzzle, titled "Heritage," was constructed by Sylvia Baumgarten.  According to my incomplete records, this is the only puzzle she published in The New York Times, which is a shame, since it's certainly one of the best Will Weng–edited Sundays I've seen to date.  This 23x puzzle was originally published on July 4, 1971, and was recently litzed by Howard Barkin.  It features ten symmetrically interlocking theme entries related to American history (mostly to Paul Revere), two of which contain rebuses of numbers in the grid.  But what really makes this puzzle stand out is its ultrasmooth nonthematic fill and wide-open grid, both of which are amazingly clean considering the lack of computer software and that this appears to be the constructor's debut!  Some of my favorite entries are THE 8 BALL, CHEETAH, HANDBAG, SHOOT UP, SEA FOAM, ANAHEIM, BEET RED, EYELASH, and TORPEDO.  Also, both the upper center and lower center feel particularly elegant in that they flawlessly fill around three theme entries each.  I'm not as fond of 5OTHS, the partials A DOUBT and END OF IT, the Nazi camp DACHAU, OUTMIME (which I mentioned above), RERAMS, the variant spelling ABISS, or the theme entries BOSTON TEA and CONCORD MASS.  I'm partial to the 1-Across entry QUINQUE because I take Latin, though I have to admit, it wouldn't be my first choice for that position, despite its 2 Q's.  Notwithstanding these small flaws, this is a revolutionary pre-Shortzian Sunday (pun intended)—I'm sure it lit up many a solver's Independence Day!  The answer grid (with highlighted theme entries) can be seen below: 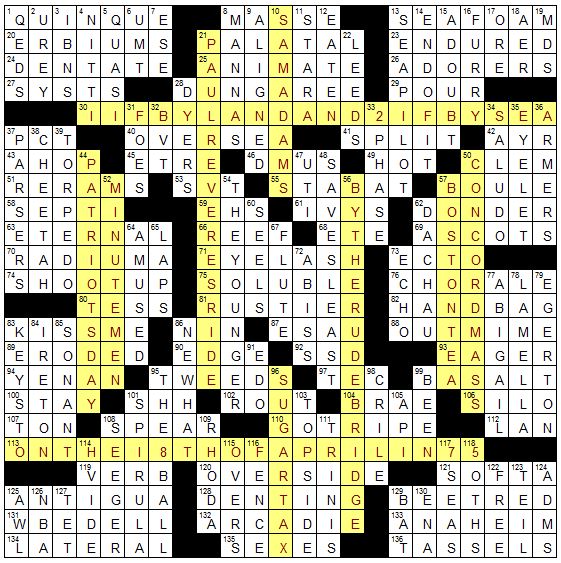 If you thought HELLBOX was an unusual-sounding typographical entry last week, you'll get a kick out of this one:  ETAOIN SHRDLU (and no, this isn't misspelled).  ETAOIN SHRDLU originally appeared in the June 6, 1971, puzzle by Fay L. Gieschi (another constructor with only one puzzle on record) entitled "Type Casting," which was edited by Will Weng and recently litzed by Denny Baker.  It was clued as "Popular line for printers"; Webster gives a much more detailed description of this unusual term, however:

This devious constructor decided to cross ETAOIN SHRDLU with OELLA, a Maryland town that is also a very challenging entry.  What a printer's devil!

Not surprisingly, I wasn't able to find a good graphical representation for etaoin shrdlu, so below is a picture of a general linotype slug:

Posted by David Steinberg at 6:45 PM