We may be entering the lazy days of summer, but our litzers and proofreaders are certainly as active as ever!  On Sunday, Mark Diehl sent in 21 puzzles, putting his personal total at more than 2,800 litzed puzzles!  Then on Monday, Martin Herbach sent in five batches totaling 35 puzzles; later on, Mike Buckley sent in 7 more, and on Tuesday, Denny Baker sent in another 7.  On top of all this, Todd Gross proofread an entire month of 1982 puzzles and just sent 10 more a few minutes ago!  Way to go, everyone—before you know it, we'll be litzing from 1966 and proofreading from 1981!

In other news, I finished cluing the Pre-Shortzian Puzzle Project metapuzzle late last week.  I sent the puzzle off for test-solving to steel-trap litzer/proofreader Todd Gross, who called it "an awesome piece of construction."  Based on Todd's excellent suggestions, I tweaked a few clues and the instructions yesterday—the puzzle is now completely ready for mainstream solving!

The metapuzzle, which will be available for download on XWord Info, will be released on June 29, the official one-year anniversary of the Pre-Shortzian Puzzle Project!  There will be no charge for entering the metapuzzle contest—if you really enjoy it, though, a contribution to the Pre-Shortzian Puzzle Project would be much appreciated!  And there will, of course, be crossword-friendly prizes!  In the meantime, the most important thing to do is spread the word about this metapuzzle to other crossword fans—the more solvers we have, the merrier!

Also, Peter Gordon's Kickstarter campaign for Fireball Newsweekly Crosswords has almost reached its $10,000 goal!  There were three awesome new awards offered earlier this week for pledges of $450 or more, and many additional awards at the other levels have been added.  So if you were thinking of pledging, say, $20 but were kind of bummed that all the book awards were gone, now you can get one!  I'm stoked about the Fireball Crosswords baseball cap I'll be getting, and there are still a bunch of those left.  The campaign ends Sunday, though, so if you'd like to see this very worthwhile project happen, click here to make a pledge or add to the one you already made!

As the proofreading continues, many more funny typos have surfaced and been corrected.  Here are several gems from the project's "collection," courtesy of Todd Gross:

Today's featured puzzle, by an unknown constructor, was originally published on December 13, 1969.  It was edited by Will Weng and was recently litzed by Martin Herbach.  When I featured a 23-block crossword back in March, I never imagined I would discover another one from significantly earlier on.  But once again, the Will Weng puzzles offered a pleasant surprise:  another ingenious 23-block puzzle with an actual theme in the four intersecting 15-letter entries!  The theme is accounting, and our mystery constructor managed to come up with a tetrad of in-the-language entries that fit beautifully into the grid.  ARITHMETICAL AID is probably the iffiest of the bunch, but it's certainly inferable from the clue "Adding machine, for example."  The nonthematic fill is remarkable given all the grid constraints—who doesn't love entries like HOME RUN, MEANDER, and DELICATE?  There are a few enigmatic entries, though they aren't the usual sort of three- and four-letter dreck that snuck into many pre-Shortzian grids.  (In fact, a grand total of only 20 three- and four-letter entries, the vast majority of which are quite well-known, appear in the grid.)  These select few "meh"-inducers include PLANATE (clued as "Flattened."), SERENES ("Tranquil expanses."), and AUTOMEN ("U.A.W. members.").  I could add PICTISH ("Of an old British people."), SNUFFER ("Candle device"), and BELDAM ("Hag") to this list, but they're so much fun to say that I'm having a hard time objecting to them.  The clue for TUNE OUT ("Give up on, as a TV program.") is particularly amusing as well.  All in all, this is certainly one of the best pre-Shortzian puzzles I've seen—I don't think Weng will run out of surprises until I look at his very last (or very first, depending on your point of view) edited puzzle!  The answer grid (with highlighted theme entries) can be seen below: 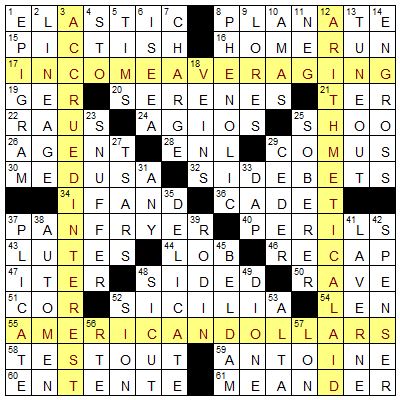 Since we had five funny typos this week, I thought I'd feature five amusing clues (whose constructors are unknown) from the early Weng era as well.  Coincidentally, all five of these clues come from the same batch of Martin Herbach puzzles, which contained five weeks.  In the December 24, 1969, puzzle, the entry HAS-BEEN was clued as "One whose future is past."  The day before, the entry SNACK was evocatively clued as "Dieters, avoid this!"  I haven't come across any other pre-Shortzian clues that are such arrant commands!  The December 6 puzzle contained a cornucopia of clever clues, my favorite of which was "Marriage counselor's concern." for STATE OF THE UNION.  On December 4, the entry TAXIDERMY was brilliantly clued as "Stuffy business."  Finally, on a more historically interesting front, the entry PROGRAMMED was clued as "Fed the computer." in the December 3 puzzle.  Remember the good old days when computers were operated with punch cards?  Well, thank goodness I don't—Java is much, much more convenient!  Nevertheless, here is a picture of a computer punch card:

Posted by David Steinberg at 4:34 PM