I'm delighted to announce an interview with master puzzle constructor Charles Gersch in the Pre-Shortzian Constructor Interviews section of this site!  Charles's first crossword was published when he was just 13 1/2 years old (February 21, 1944) in the New York Herald Tribune.  Since then, Charles has built many innovative puzzles that were published in the Farrar and Maleska eras.  To read more about Charles (and his son Jonathan, who is also a prolific Times crossword constructor!), click here or navigate to the Pre-Shortzian Constructor Interviews page.  And be sure to check out today's featured puzzle below, which Charles cited as his personal favorite!

I'm also very happy to report that we're now over 10,900 on the litzing thermometer—as I write this, only 60 puzzles away from 11,000, another big milestone!  On Sunday, Nancy Kavanaugh sent in 14 puzzles, putting her personal total at more than 500 litzed puzzles—congratulations, Nancy!  Later that night, Mark Diehl sent in 14 more, putting us over 10,900—and his own personal total at more than 3,300!  Congratulations, Mark!  Then Monday, Todd Gross sent in 10 more proofread puzzles, and we began sending out the 1980 puzzles for proofreading.  Wednesday evening, Todd McClary sent in 7 litzed puzzles, and a couple of hours later, Mark sent in 28 more.  Awesome job, everyone!

As the 1981 proofreading has continued to progress, the list of funny typos has grown exponentially!  Here's a heptad of my favorites:

Today's featured puzzle, "Casablanca at 50," was constructed by Charles Gersch and edited by Eugene T. Maleska.  It was originally published on November 29, 1992, and was litzed by Barry Haldiman (or one of his team of litzers).  This impressive construction, which was published 50 years and 3 days (the closest to 50 years possible, since the puzzle had to appear on a Sunday) after the movie Casablanca was released, is one of the earliest examples of a tribute puzzle I've seen.  It features a remarkable 17 mostly symmetric theme entries that relate to Casablanca, many of which are stacked or intersect one another!  The symmetrical stacked splits DOOLEY/WILSON (clued as "SAM" [this clue, as well as the clues for all the other actors in the movie, are capitalized]) and AS TIME/GOES BY ("Song that Sam was asked to play") feel particularly elegant, though I also love the arrangement of theme entries in the center!  Another thing that makes this puzzle stand out is the quality of the nonthematic fill, which is jam-packed with interesting entries, such as SPACESHIP (interestingly clued as "Vehicle of the future"), FRESHENED UP, SNEEZE AT, DAISY MAE, POPCORN, RAMPARTS, NORDIC, and OAFISH.  That's a long list for such a theme-dense Sunday puzzle!  There are also some clever, tricky clues, such as "He really makes money" for COINER, "He may be tight" for END, and "Fearsome threesome" for FATES.  The puzzle does contain a handful of tough abbreviations, such as AEA ("Thespians' org."), PDB ("Educator's deg."), IMB ("Worldwide maritime gp."), NDA ("Tooth specialists' gp."), and PFD ("Adj. for some stock"), but overall, this is truly a pulchritudinous pre-Shortzian puzzle, and I'm looking forward to seeing the rest of Charles's puzzles as the litzing and proofreading continue!  The answer grid (with highlighted theme entries) can be seen below; the entire puzzle is posted on XWord Info: 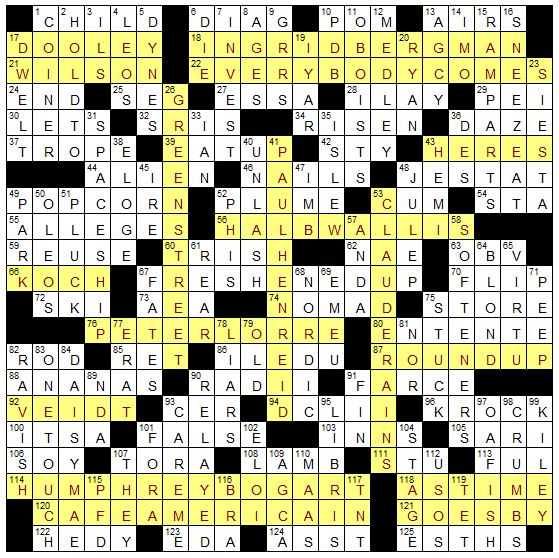 I've been keeping my eyes peeled for interesting and clever clues as we continue back in time; here are five that stood out from the Farrar and early Weng eras:

The last clue is definitely my favorite of the bunch—it's one of the most brilliant clues I've ever seen, let alone in a pre-Shortzian puzzle!  On that note, below is a picture of some asparagus tips:

Posted by David Steinberg at 4:01 PM