Awesome news this week:  As many of you know, Jim Horne had decided to wind down XWord Info at the end of this year.  This would have been a huge loss for the crossword community, and even though the pre-Shortzian puzzles would have continued being posted on his site, there would no longer have been a place where all the New York Times daily and Sunday crosswords could be found.  So I was thrilled to learn on Monday that XWord Info wouldn't be winding down after all—instead, Jeff Chen will be taking over as the administrator.  Thanks so much, Jim and Jeff, for making this happen!

A ton of newly litzed and proofread puzzles came in this week as well, and we're now sending out puzzles from 1964!  Sunday afternoon, Mark Diehl sent in 35 puzzles, putting his own total at more than 3,200 puzzles!  A few hours later, Jeffrey Krasnick sent in 7 more, which were followed by 20 from Howard Barkin that night, and then 10 more proofread puzzles from Todd Gross.  Tuesday afternoon, Denny Baker sent in 7 puzzles, putting us over 10,800 on the litzing thermometer!  Then late Wednesday night, Mark sent in another 21 puzzles, followed by 14 more on Friday morning.  Great job, everyone!

Since we're now in a new year, here's a representative photo from 1964.  It's of the New York World's Fair, which actually continued into 1965.  The Unisphere—a 12-story high, stainless-steel model of the Earth—is in the center:


While I'm on the subject of photos, Miriam Raphael (aka Ditto) recently sent me a terrific portrait of Will Weng, which I plan to frame and display somewhere in my bedroom!  Below is a scan of the photo, which was taken by Don Christensen:


Now that I'm back from Stanford, I have time to resume the Puzzle/Clue and Entry of the Week features of these blog posts.  This week, I'll be featuring a Will Weng–edited puzzle constructed by Nancy Schuster!  This impressive puzzle was originally published on March 12, 1969, and was recently litzed by Martin Herbach.  It features eight theme entries clued as military-rank fill-ins—for example, OF INDUSTRY is clued as "Captain ___." and PUNISHMENT is clued as "Corporal ___."  I've seen many puzzles with different military ranks starting each theme entry, but never one where the entire theme is in the cluing.  Kudos to Nancy for adding a nice, clever twist to an already-solid theme idea . . . and for filling the grid so nicely!  The nonthematic fill's highlights include SHERBET, SNUFFED, and PIPE STEM.  There are also some interesting tidbits in the clues:  "Destination of some planes." is a historically significant clue for CUBA, and I like the back-to-back parallelism of "French numeral." for ONZE and "French summers." for ETES.  I do wish there hadn't been any other nonthematic fill-in-the-blank clues, since they distract from the theme a bit, but I can see why they were necessary.  Also, COPAS (clued as "Panama gum trees."), TUFA ("Porous rock."), and OLT ("Danube tributary.") aren't my favorite entries.  Overall, though, this is a nice, solid pre-Shortzian puzzle—I look forward to reviewing the rest of Nancy's earlier opuses!  In the meantime, below is the answer grid (with highlighted theme entries) for this puzzle: 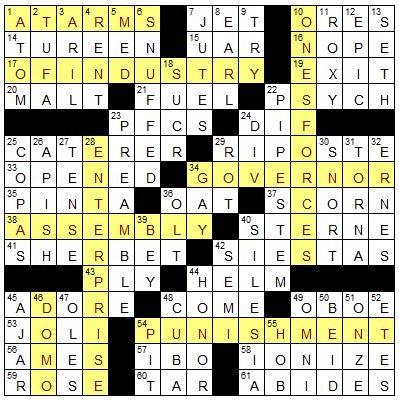 I've noticed that Margaret Farrar– and Will Weng–edited puzzles contained many clues that started with "Modern."  These clues are always amusing, since the 1960s were so long ago that the answers to the "Modern" clues are now considered commonplace or even obsolescent!  Over the past few months, I've amassed a whole collection of "Modern" clues:

Below is a picture of something that really is modern these days—I bet I'll be laughing at how old it is 50 years from now!

Posted by David Steinberg at 1:39 PM