We're now in the dog days of summer, and litzing slowed a bit this week, perhaps as people dealt with the heat or went on vacation!  We still made great progress, though:  On Tuesday morning, Nancy Kavanaugh sent in 14 puzzles.  Thursday afternoon, Todd Gross sent in 10 more proofread puzzles.  Then late Thursday night, Mark Diehl sent in 27 puzzles.  Thanks so much, everyone!

If you've been litzing or taking a break, mark your calendar:  I'm planning to hold a new litzing contest starting September 1 that will be structured completely differently from any previous ones!  Litzing contests allow us to make an amazing amount of progress really quickly; even though litzing contest puzzles often contain more errors than do regularly litzed ones, they still have remarkably few mistakes.  Besides, our proofreaders wouldn't have nearly as much fun without them!  Stay tuned for details—in the meantime, keep up the awesome litzing and proofreading!

On another note, a week or so ago I dreamt I was having dinner in a giant dining hall with all the deceased pre-Shortzian constructors and editors!  In my dream, Margaret Farrar had just left the hall, so I decided to talk to Will Weng instead.  I asked him if he knew where the rest of his daily puzzle author names were—unfortunately, I woke up before he could respond!  The weird parts were that I had previously met Will Weng in my dream and that Eugene T. Maleska wasn't present.  Perhaps a future dream will result in oneiromancy—then maybe I'll know where all the daily puzzle author names are!

Recently proofreader Tracy Bennett discovered a surprising clue in the December 25, 1981, crossword that appears to be a drug reference.  This puzzle was constructed by C. J. Angio and edited by Maleska.  The clue, "Cause of being lit up like a Christmas tree," leads to the answer TOOT.  Tracy thought this clue might be a cocaine reference.  After doing a little research, however, I decided it could also have been a much more mild reference to alcohol.  Webster lists "[A] drinking bout" as the third definition of TOOT; also, "lit" can euphemistically mean "happy."  Regardless, this is a rather edgy clue for the Maleska era—I would have been much less surprised to see it in a Weng-edited puzzle.  Then again, it is rather apt, considering that the puzzle was published on Christmas.  On a similar note, I was looking through some pre-Shortzian puzzles on XWord Info and was amazed to discover that Maleska allowed the two heroin references SCAG and SKAG into his puzzles.  And no, unlike Farrar, he didn't clue either of them as "Great Lakes boat for duck hunting."

Today's featured puzzle, whose constructor is unfortunately unknown, was originally published on February 11, 1972.  The puzzle was edited by Will Weng and was recently litzed by Mark Diehl.  I've seen many pangrammatic puzzles from the late '60s and early '70s, but this is the first pre-Shortzian pangram I've come across that accomplishes this feat with just four theme entries:  The entire alphabet "falls down" in symmetrical chunks!  ABCDEF is clued as "A beginning"; FGHIJKLM is clued as "A middle"; NOPQRSTU is clued as "A middle (continued)"; and UVWXYZ is clued as "An ending."  Even though this puzzle has an 82-word grid, its unconventional gimmick really makes it stand out.  Another thing that distinguishes this puzzle is its nonthematic fill, which is surprisingly fresh and lively.  Its highlights include the awesome entries AWKWARD, WHIMPER, WRAITH, UMBRELLAS, BEDIZENS, and AMETHYSTS!  RAUWOLFIA (clued as "Dogbane") is the most unusual-sounding entry in the grid.  According to Webster, rauwolfia is a pantropical tree and shrub genus whose roots can be used to treat hypertension.  This genus was named after the German botanist Leonhard Rauwolf, who did extensive research in the Middle East.  Back to the puzzle:  The weaker entries in the fill primarily seem to be located in the bottom right, which isn't a huge surprise, since that corner houses the end of the alphabet chain.  These not-so-great entries include a second unusual plant reference, SPURRY ("Chickweed"), as well as USW ("Etc., in Bonn"), SPIV ("Hanger-on, in Britain"), NRS ("Digits: Abbr."), and LCT ("W. W. II ship").  I also don't like the entry ST LOUIS MO ("Midwestern address"), but it feels no worse than any other city/state abbreviation pair.  All in all, though, this is an exceptional Weng puzzle with a novel theme idea!  The answer grid (with highlighted theme entries) can be seen below: 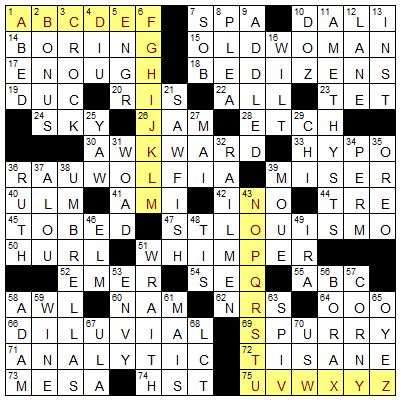 Today's featured pre-Shortzian entry is NICTITATED.  NICTITATED originally appeared in the October 10, 1967, puzzle, which was constructed by David S. Hogmer, edited by Margaret Farrar, and litzed by Mark Diehl.  According to the Ginsberg clue database, no form of the verb NICTITATE has been reused in the Shortz area.  The original clue for NICTITATED was simply "Winked."  Webster also defines nictitate as "wink," though it does include this unusual verb's etymology.  Nictitate comes from an alteration of the past participle of the Latin verb nictare, meaning "to wink," from which we may also get the word connive.  Below is a picture of a nictitating face: