It's been another busy week on the litzing front!  Saturday night, an anonymous litzer sent in 6 puzzles.  Then Sunday afternoon, Lynn Feigenbaum sent in 7 more, which were followed by another 7 that night from Mike Buckley, putting us over 13,800 on the litzing thermometer and Mike's own total at more than 200!  Monday morning, Nancy Kavanaugh sent in a mega-batch of 42 puzzles, bringing her total to more than 900 puzzles!  That afternoon, Todd Gross sent in 10 proofread puzzles.  Tuesday morning, Denny Baker sent 7 puzzles, and very early Wednesday morning, Todd sent in 10 more proofread puzzles.  Thursday morning, Jeffrey Krasnick sent in 7 puzzles, which were followed that afternoon by 7 more from Denny, and a bit later, 11 more proofread puzzles from Todd.  Finally, this morning Mark Diehl sent in 14 puzzles.  Great job, everyone—thanks so much again!

I'm delighted to announce that Ralph Bunker is the December Litzer of the Month!  Ralph is an avid cyclist who has litzed more than 700 puzzles in just 10 weeks!  To read more about him, click here.

Event alert:  In two weeks, I'll be giving a talk at the Palos Verdes Peninsula Center Library on the crossword centennial and the Pre-Shortzian Puzzle Project!  To see the details, click here.

And litzer Todd Gross recently told me about another crossword centennial talk by verbivore Richard Lederer this coming Monday at the San Diego Central Public Library; for details, click here.

Litzer Jeffrey Krasnick posted links to three awesome Toronto Star articles on Facebook today, including one about pre-Shortzian and Shortz-era constructor Charles M. Deber and the history of the crossword, "The crossword is 100 years old and thriving."  If you click on the link, you can also watch a fascinating video of Charles discussing his construction process.  Jeffrey himself is featured in the second article, "Canadian trio are rivals at American crossword contest"—congratulations, Jeffrey!  And the third article, "Canadiana crosswords compete with U.S. puzzles," is an interesting look at Canadian crosswords geared to Canadians.  Thanks so much for letting everyone know about these articles, Jeffrey—great weekend reading, eh?

Any blog about pre-Shortzian New York Times crosswords would feel incomplete without highlighting a Stepquote, one of the most iconic and controversial theme types published in the Farrar, Weng, and Maleska eras!  The Stepquote was first introduced in 1964 by none other than Eugene T. Maleska himself; in subsequent years, New York Times solvers saw many more Stepquotes and variations on this twisty gimmick, such as the Slidequote and the Boxquote, in their Sunday magazines; the vast majority of these were constructed by Maleska.  In recent years, the Stepquote, which declined in popularity after Will Shortz became editor, has become the epitome of a substandard pre-Shortzian puzzle.  Critics have denounced the Stepquote for having low theme density and unchecked theme squares in the quote; also, many modern solvers and editors feel that quote themes as a rule are hackneyed.

The Stepquote certainly isn't my favorite type of pre-Shortzian puzzle, but I do appreciate how Maleska shook things up with a novel gimmick and produced some of the earliest examples of puzzles with entries that bend around corners.  Today's featured puzzle, which was titled "Stepquote, Punny Style," was constructed by (drumroll, please!) Eugene T. Maleska; published on September 25, 1966; edited by Margaret Farrar; and litzed by Martin Herbach.  This Stepquote features a particularly amusing and tongue-twisting quip:  IS IT HARDER TO TOOT OR TO TUTOR TWO TOOTERS TO TOOT?  The rest of the puzzle plays out like a themeless, though Maleska did manage to toss in the quote's author CAROLYN/WELLS, albeit asymmetrically.  The wide-open corners allowed Maleska to incorporate many fresh and interesting entries into the grid.  My favorites include SCHISM, AIR-COOL, DRIES UP, DESIDERATA, RADIATOR, STAIRCASES, SKEETERS, CASHEWS, and TREMOLO—what a lovely ennead!  On the other hand, the puzzle does include a handful of entries I'm not so fond of:  the partials COP ON (clued as "The ___ the beat."), IDES OF ("___ March."), and RULES OF ("___ order."); the roll-your-own entries DENUDERS ("Strippers."), DEPARTER ("Goer."), SNARER ("Man with a gin."), and RERIDE ("Go cycling again."); poetic spellings OERTAKE ("Catch up with: Poet.") and ERENOW ("Previously: Poet."); and an olio of lesser-known entries such as OMBERS ("Mediterranean food fish."), TRENAIL ("Wooden peg."), and SAI ("Capuchin monkey.").  Also, AASA ("Initials of school group.") probably isn't the most famous of organizations, though I'm not surprised Maleska used it, since he was also a school administrator.  In all, this is a solid pre-Shortzian puzzle—it doesn't knock my socks off, but I certainly enjoy seeing it more than another themeless Sunday.  The answer grid (with highlighted theme entries) can be seen below: 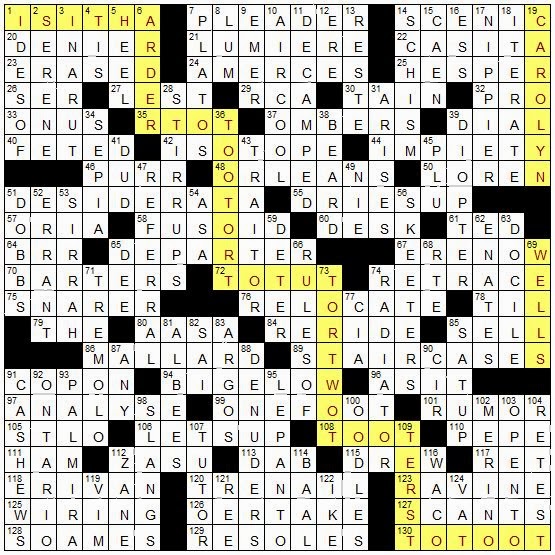 Posted by David Steinberg at 7:09 PM