Tomorrow is the crossword centennial, and I'll be giving a talk about it and the Pre-Shortzian Puzzle Project at the Palos Verdes Peninsula Center Library from 2 to 3.  For more details, click here.  I look forward to seeing some of you there!

Also, The Orange County Register asked me to do a special crossword for the centennial.  It appeared in today's paper and can be seen here—have FUN!

And litzer Todd Gross just sent me a link to an article about him and the centennial puzzle he and I constructed for The New York Times—to read it, click here.

Last week's post included Todd's awesome article on the New York Herald-Tribune, and litzer Mark Diehl decided to accept the Herald-Tribune's challenge and construct a crossword using the parameter it specified—great job, Mark!  I've posted the puzzle on Scribd, and you can download a PDF of it here.  I'll post the solution next week. 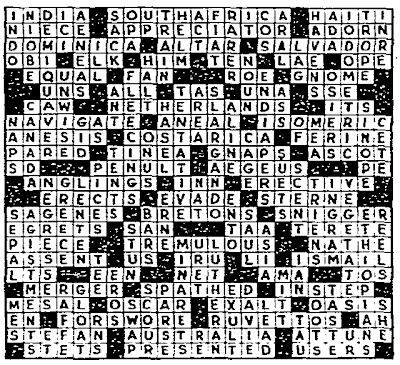 This puzzle contains an impressive number of country names, but it also has many two-letter words, which were considered bad style even back when Margaret Farrar was editing in 1942.  The crossword also has left-right symmetry, which I don't recall seeing in any other Farrar-edited puzzle.  I wonder whether Margaret felt compelled to publish this puzzle because Sulzberger and Merz both held important positions at The New York Times.  The puzzle certainly isn't poorly constructed, but it feels different from any other Farrar puzzles I've seen so far.

On to litzing—it's been another very busy week!  Saturday morning, Ed Sessa sent in 7 puzzles, then that afternoon, Nancy Kavanaugh sent in a mega-batch of 41 puzzles, putting us over 14,000 on the litzing thermometer!  Late Saturday night, Mark Diehl sent another 21 puzzles.  Sunday morning, Jeffrey Krasnick sent in 7 puzzles, which were followed that afternoon by 7 from Denny Baker.  Tuesday morning, Mark sent in 7 more puzzles.  Wednesday morning, Denny Baker sent in another 7 puzzles, which were followed by 7 more from Jeffrey that evening and which put us over 14,100 on the litzing thermometer!  Thursday afternoon, Denny sent in another 7 puzzles, then Friday morning, Lynn Feigenbaum sent 7 more.  And Howard Barkin sent 20 more puzzles this week too!  Great job, everybody—it won't be long before we only have 2,000 more puzzles to go (about the right amount for the next litzing contest!)!
Posted by David Steinberg at 5:36 PM