We're now also in 1954, and since we're in the midst of a holiday season, it seemed fitting that a representative photo from that year would be of a Swanson TV dinner!  Swanson coined the phrase TV Dinner and produced the first hugely successful frozen meal that year.  According to Wikipedia, it consisted of turkey, cornbread dressing, frozen peas, and sweet potatoes.  Though it may not seem particularly appetizing to us nearly 60 years later (especially as our holiday fare!), it's not all that different from the microwaveable meals many of us pick up these days at Trader Joe's!


Last Saturday I gave a talk at the Palos Verdes Peninsula Center Library on the crossword centennial, the Pre-Shortzian Puzzle Project, and crossword editing and constructing.  It was a lot of fun (and included OREOs I brought!) and quite well attended, considering the time of year—some 20 people took a break from their holiday revelry and came out in the middle of the afternoon, including litzer Todd Gross, who drove all the way from Mesquite, Nevada!  Thanks so much again, Todd!  The presentation was videotaped, and I may be able to post a link to it soon.  I'm hoping to give the talk again at a couple of other libraries next year.  Here's a picture of the display case I set up in the library: 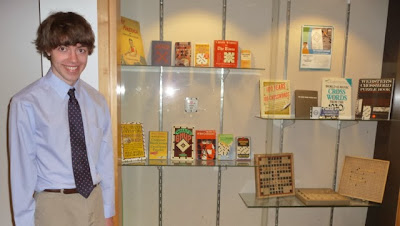 Last week I posted the puzzle litzer Mark Diehl constructed in response to one of the New York Herald-Tribune's constructing challenges.  The solution to his puzzle is now also on Scribd—to see it, click here.

Today's featured puzzle, whose constructor is unknown, was edited by Margaret Farrar, litzed by Denny Baker, and originally published on April 22, 1966.  As litzing has continued, I've come across many themeless puzzles with more than 72 words (usually 74) that contain a handful of lively entries.  I don't typically record the dates of these themelesses, since my list of puzzles to feature here is already 44 pages long; occasionally, however, I'll come across a puzzle that appears to be a high-word-count themeless but that actually has a nifty little theme.  This week's featured puzzle, for example, has a wide-open grid with a high word count but also contains a subtle gimmick involving seven theme entries that start with RH and a reveal (RHO)!  RHO is clued as "Greek letter, feature of this puzzle."; according to Webster, RHO is pronounced as either R- or RH- in English.  The theme entries themselves are all fun and lively words—I particularly like RHYTHM, RHETORIC, and RHODESIA!  The nonthematic fill also has many highlights, including SAD TO SAY, HACIENDA, YAHOO, CUSHY, MARINATE, and the old-fashioned ETHERIZE.  That's a lot of good fill!  There are, however, a few entries solvers might have found mysterious:  OSTRACON (clued as "Athenian ballot, used in banishing Aristides."), UNGULATE ("Having hooves."), and HOSE CART ("Fire company's wagon.").  HOSE CART, which Webster defines as "a wheeled vehicle for carrying the fire hose," intrigued me so much that I had to find a picture of one:


In addition to the mysterious entries, this puzzle also contains a few not-so-great entries, including OCRA ("Vegetable: Var."), IRANIC ("Persian"), ECTAL ("Exterior: Anat."), and the clunky 8-letter partial SEES ONE'S ("___ way (clear)").  The cluing is mostly standard, though there are several interesting tidbits:  HACIENDA and ESTATE are both clued as "Country place.," VENUS has the Space Age-esque clue "NASA target.," and SUSAN is clued as "Name meaning 'a lily.'"  In all, this is a particularly strong pre-Shortzian daily puzzle—I look forward to spotting similar not-so-apparent themes as I continue to look through packets litzers send in!  In the meantime, here's the answer grid (with highlighted theme entries) for this puzzle: 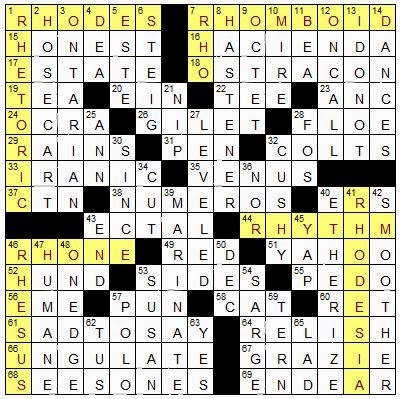 I've seen a number of "Name meaning ___" clues in puzzles from the mid-to-late '60s, such as the SUSAN clue in this week's featured puzzle.  I always appreciate seeing these "Name meaning ___" clues, as they're much more interesting than the standard "Man's name." and "Woman's name." fare.  Here are a few I've spotted in puzzles from the mid-to-late Farrar era:
Since I've neither met nor heard of anyone named Eulalia, I looked online and found a picture of a woman named Eulalia Perez, whose picture was reportedly taken at the age of 139!

Posted by David Steinberg at 5:58 PM