Todd Gross on New York Herald-Tribune Crosswords, and In 1955

Today I'm delighted to present a fascinating article by litzer Todd Gross on the New York Herald-Tribune crossword!  Todd has been researching the Herald-Tribune for several years and has discovered what may well have been the first precursor of today's highly interrelated crossword community—enjoy!


An Introduction to the New York Herald-Tribune
By Todd Gross

This is a blog about The New York Times crosswords, and I’m sure everyone here knows that the first modern crossword was published in the New York World.  This article, however, is about another New York newspaper that played a role in the development of crossword puzzles but that isn’t as well known by solvers and aficionados:  the New York Herald-Tribune.

About four years ago, I started getting microfilm copies of the Herald-Tribune via interlibrary loan.  For no particular reason, I decided to start in January of 1928 and have since seen about two years’ worth of the paper, from January of 1928 to early March of 1930.  The crosswords themselves were, with a few notable exceptions I discuss later, the same sort you’d find in the World or Simon & Schuster books of the time:  themeless, mostly 15x15, some two-letter entries and unkeyed letters (but fewer than, say, five years earlier).  What makes the Herald-Tribune important in crossword history is the puzzles’ editor, Helen Haven, and how she created a kind of community, including constructors and solvers.

This is the only picture I have of Ms. Haven, taken immediately after the Herald-Tribune’s 1928 Cross-Word Puzzle Contest.  The caption below reads “At the Wanamaker Auditorium yesterday, left to right, J. Van Cleft Cooper, new champion; Helen Haven, puzzle editor; Colonel William Haskell, manager of the contest, and D. J. Wernher, runner-up.” 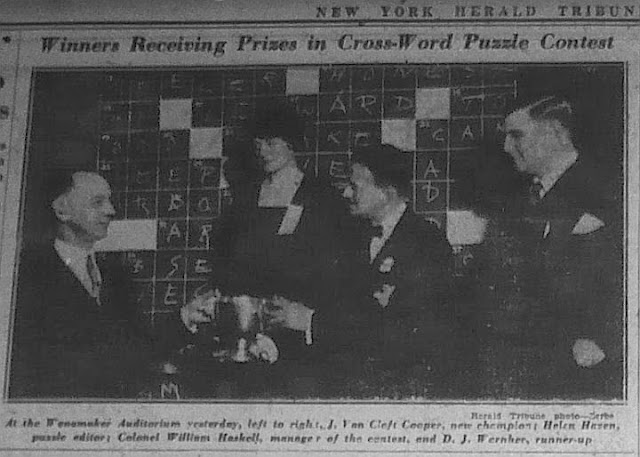 Nowadays, thanks to online blogs and mailing lists, interaction between constructors, editors, and solvers can happen in real time in a variety of ways.  But in the 1920s, your average crossword solver knew little more about puzzles’ constructors than their names and certainly couldn’t ask them questions or offer opinions to them.

But in the Herald-Tribune’s daily puzzle column, Ms. Haven included a paragraph or so of text every day.  And it wasn’t just about the puzzle printed below—it could be about puzzles in general, or interesting stories about people who solve puzzles, or questions and/or comments addressed directly to the readers.  It could even be content from readers themselves.  Through this limited channel, six times a week, readers were able to comment about puzzles, and their comments might be incorporated into future columns, even future puzzles.

I’ll give just a few examples here.  Starting in June of 1928, the daily puzzle column regularly included a cryptogram.  It all started innocently enough, with Ms. Haven writing the following:
With the advent of the cryptogram into general favor—(it has long been the delight of dyed-in-the-wool puzzlists)—we offer one herewith, and promise the solution to-morrow:  QGUUOK  QZRRKVPF  WZRK  YKKP  CDVK  RZVAKX  ZPX  RWKVKLDV  CDVK  APRKVKFRAPM  DL  OZRK.   Do you want some more?
And it turned out that the readers did want more:  The first reader-submitted cryptogram was printed two days later, and the day after, Ms. Haven wrote the following:
Enthusiastic response has met our suggestion that we have occasional cryptograms along with the daily puzzles.  G. B. C.'s question in cryptogrammese (or would it be cryptogrammar?) was "would not the Sunday page be more complete with one corker like this?"  Now here's an easy one for to-day:  IRTZT HZT VHBN LHNU IW GZTHQ HBF UWAKT H YZNXIWEZHV, HU VWUI WS NWJ XZWGHGAN RHKT SWJBF WJI.
Note the quick turnaround here:  A reader’s response was printed two days after the original comment.  But back to crossword puzzles.  On April 22, 1929, the first day constructors’ addresses (!) were published with the puzzle, the puzzle included this comment:
Advice to constructors from one who says he writes from experience:  Keep away from six-letter words ending in "ose."  He says there are very few to go 'round that make good interlocking.
On May 2, ten days later, the comment referred back to this piece of advice (the question marks are for parts I couldn’t make out because the picture I took was too fuzzy—I don’t have the kind of setup used by Recordak Corp. (the division of Eastman Kodak that created these microfilm reels)).
It seems that several days ago we p???ed a warning against the use of six-letter words ending in "ose," as there were few of them that could be interlocked successfully: The letters should have read "???" but before we had time to make this correction one ambitious contributor accepted the challenge and sent us a puzzle full of six-letter words ending in "ose."  We'll publish it soon.
I’m pretty sure this is the May 20 puzzle by Charles Griffen, which appears to contain at least six such words (probably eight, but again, the picture I took was too fuzzy to be certain).  Another comment challenging constructors to use PHENOMENON as their 1-Across entry resulted in several such puzzles being submitted.  The first one was published on August 26, 1929, and constructed by Ed Ward of Saugerties, New York.  This was the accompanying paragraph:
Here is the first of the puzzles made in answer to our challenge.  It is an interesting fact that many who accepted it by sending puzzles with this No. 1 across are new to this department.  Evidently we have brought out some hidden talents.
As far as I know, this kind of forum-like community, with interaction between solvers, constructors, and the column’s editor (of which I give just a few examples here), is the first of its kind in the crossword world.  This might explain why Eugene Maleska published his first crossword in the Herald-Tribune in 1944 and why he kept a voluminous correspondence with constructors and solvers alike in the days before e-mail and text messages.

By the way, once constructors’ addresses were given with the puzzle (one wonders if readers ever used these addresses to contact a constructor . . . I haven’t found any collaborations or mentions of this kind of contact yet), Ms. Haven often made comments on the various places constructors hailed from, such as the following:
Today we welcome another Far Western state into our records.  So far we have Washington, California, Colorado, Wisconsin, New Jersey, Connecticut, Pennsylvania and, of course, New York—not to mention Campobello, S. C. and New Brunswick, Canada.
And here’s a typical example of what these addresses looked like, from frequent contributor R. E. Thayer, who lived in Middletown, Connecticut:

Finally, I want to return to my comment about the puzzles themselves.  As I said, most crosswords were the standard kind of the period, but every now and then a more experimental kind of puzzle would be published.  I've reprinted two examples here, both by the same innovative constructor:  Bruce J. Davidson.  First, an early circular crossword, published in September of 1929: 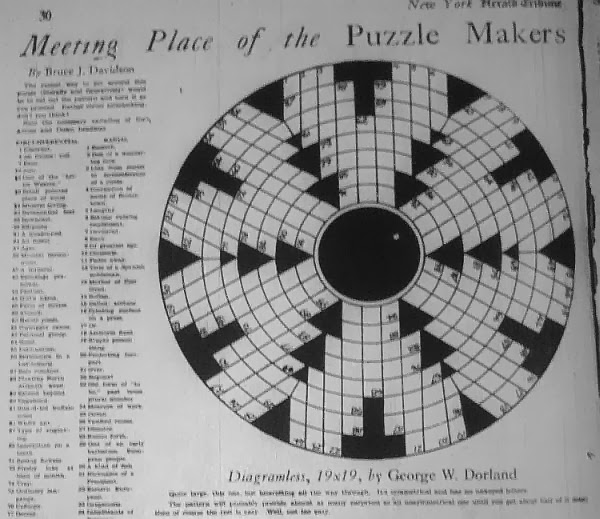 And lastly, an even stranger grid published in November of ’29.  This puzzle has a checkerboard grid: the 4 isolated white squares are part of two diagonal 5-letter answers each, whose clues are in a separate section in the lower right below the grid. 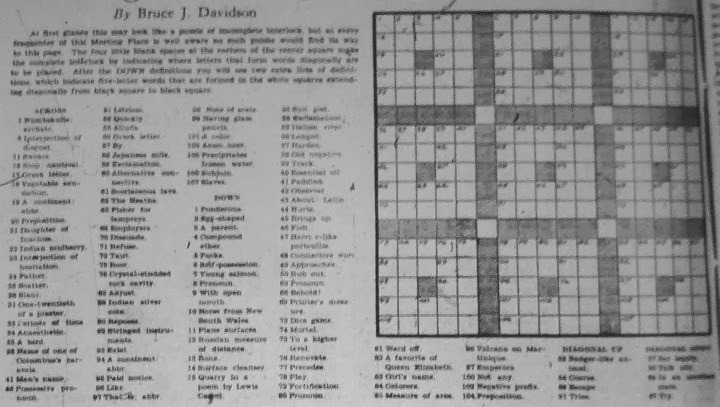 I hope you’ve enjoyed this brief look at the New York Herald-Tribune.  I hope more folks will do their own investigating using interlibrary loan.  There’s a lot I haven’t gotten to yet (the Herald-Tribune started as a merger of papers in 1924 and lasted until 1966), and judging from what I’ve seen so far, there should be lots of interesting history left to uncover. . . .

Thanks so much again, Todd, for this enGROSSing journey into crossword history!

And with all this litzing, we've moved into a new year:  1955!  This year was notable for many historical and cultural events, but perhaps the happiest of all (especially for litzer Jeffrey Krasnick!) was the opening of Disneyland.  Here's a map of Disneyland as it was on its July 17 opening day:

Posted by David Steinberg at 3:30 PM