We're making terrific progress with the proofreading these days—just last week the 1971 puzzles went up on XWord Info, and this week the 1970 puzzles are up!  Thanks again to Jim Horne for posting them and representing some of the trickier ones so well on the site!  To see them, click here.  If you're wondering how a whole year of puzzles was proofread in a week, the answer is, it wasn't.  The puzzles get sent out in batches to different proofreaders and come back at varying times.  After they're returned, every single puzzle gets looked at again for any obvious remaining mistakes—usually these are just in the Information fields, which proofreaders don't check.

Next, all the litzer and proofreader notes for puzzles that year are investigated.  These notes indicate when someone has found what appears to be—and usually is—an editorial mistake in a puzzle.  Any confirmed mistakes are noted in a PS Note ("Pre-Shortzian Note") for future posting on XWord Info.  PS Notes also generally indicate whether the mistake was unchanged or changed—if the former, the PS Note says what the correct version should have been; if the latter, it provides details on what was changed.  PS Notes may also contain information unrelated to mistakes, as in the example pictured below for the puzzle published on July 4, 1976:

PS Notes are posted as time permits; since things have been very busy here at Litzing and Proofreading Central, most will likely appear after all the proofreading has been completed.  In the meantime, if you happen to come across any mistakes in the pre-Shortzian puzzles, please let me know so they can be corrected.

Recently I was browsing through the college section in my local library and came across a 1982 book called My Harvard, My Yale.  It's a collection of short essays by notable graduates of Harvard and Yale about their college days.  Curious, I began looking through it and came across the reminiscences of a Harvard alumnus named Harold Furth.  Harold was born in Vienna and attended Harvard twice, from 1947 to 1951 and from 1952 to 1956.  He was a professor of astrophysics and the director of the Princeton Plasma Physics Laboratory for many years.  He died in 2002, 20 years after the book was published.


What most interested me about Harold's memoir, though, was that in the very first paragraph, he wrote:


During my last three years in boarding school, I created a New York Times Sunday crossword puzzle.  Later on I found that professional puzzle-makers have special equipment:  lists of all twelve-letter words ending in ICK, and so forth.  For me, the Sunday puzzle was an insanely ambitious labor, relieved by flashes of insight and ecstasy when a whole corner would fall into place.
Being fond of puzzles, I did well in physics, but found the exercises stultifying. . . .

Later, Furth wrote for The Harvard Lampoon and published some poetry in The New Yorker, signed only with his initials.  He notes:


In fact, the only "literary" item that I have ever signed with my full name, prior to this one, is a New York Times crossword puzzle that appeared one Sunday in the winter of 1948.

How fortuitous!  I checked my database and discovered that Harold constructed the  puzzle that was published on December 12, 1948; his byline was "Harold P. Furth."  According to Wikipedia, Harold was born on January 13, 1930, which means he was 18 years, 10 months old when his puzzle was published and so is now the 28th-youngest constructor ever to have a crossword puzzle published in the Times!  I was thrilled to be able to find this new record—who knows what others will appear over time as we continue making our way through the pre-Shortzian canon!  To see XWord Info's full list of Youngest Constructors, click here.

Appropriately enough, today's featured puzzle, "Myths and Legends," was constructed by Harold P. Furth; published December 12, 1948; edited by Margaret Farrar; and litzed by Barry Haldiman.  This 166-word 23 x 23 is one of the few 1940s Times crosswords whose theme doesn't center around current events—rather, it contains a sprinkling of classical mythology references, such as TALARIA, CHARON, and BACCHUS (which are, incidentally, the first three across entries).  The theme entries' relatively short lengths and asymmetric arrangement ultimately make this puzzle feel more like a giant themeless, though I nevertheless appreciate the forward-thinking use of a noncurrent events theme.  Highlights/interesting words in the nonthematic fill include HUDIBRASTIC (clued as "Satirical in Butler's manner."), BARBETTE ("Gun platform."), ANALECTIC ("Made up of literary selections."—a much more interesting term than the crosswordese ANA!), ROTARIAN ("Member of a great civic club."), CAVEMEN, CATAPULT, and COGNAC.  There aren't very many iffy entries in this one that haven't appeared in other pre-Shortzian puzzles, though ENNUIED ("Bored.") seems like a bit of a stretch.  Overall, this is a cleaner-than-average puzzle with a nice dose of theme material—and certainly an auspicious debut for the then-teenage Harold Furth!  I very much enjoyed learning more about Harold's impressive life, and I hope to stumble upon more nuggets about pre-Shortzian constructors as time goes on.  In the meantime, here's the solution grid to Harold's puzzle (without highlighted theme entries, since the theme is relatively self-explanatory and the entries aren't arranged with any rhyme or reason): 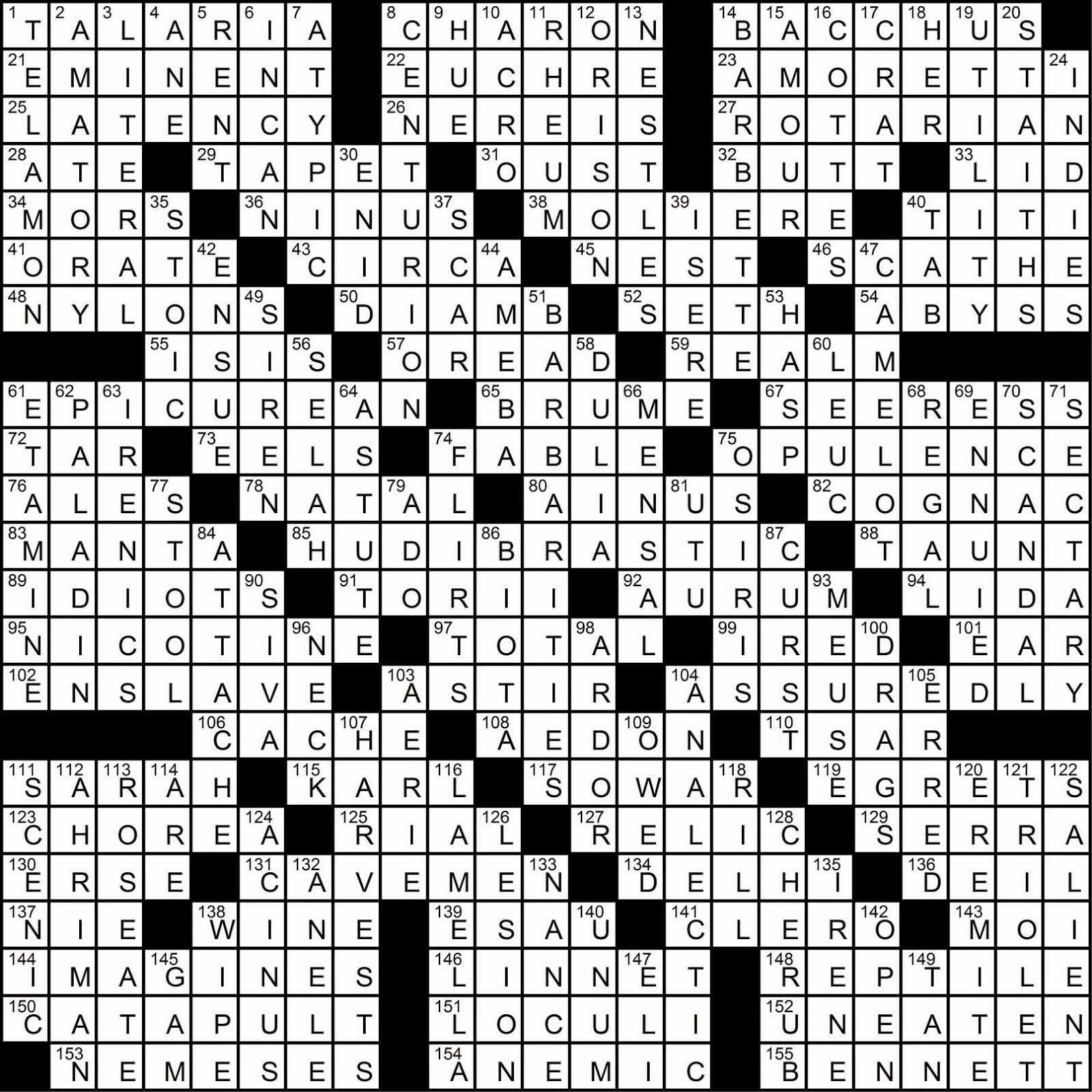 Posted by David Steinberg at 4:37 PM