1971 Puzzles Up on XWord Info, Plus Proofreading Contest Update

Great news:  The proofread 1971 puzzles are now up on XWord Info!  As usual, Jim Horne did a great job with these—thanks again, Jim!  Since the Pre-Shortzian Proofreading Challenge began, we've been making terrific progress with the proofreading—in fact, the 1970 puzzles should be done within the next week or two!  I'm now sending out puzzles from 1969 and 1968, so we should have 1969—the first year of the turbulent '60s—finished soon!  Thanks so much again, everyone!

In going through the puzzles, Howard noticed that a few clues were completely different from the ones on the PDFs.  This has happened before, usually because some puzzles were originally litzed from books or CDs, where editorial changes were sometimes made.  When we come across situations like this, we change the clues back to what the original clues on the PDFs were.  However, in order to do this, we need to check the litzed puzzles carefully against PDFs, otherwise situations like this go unnoticed.  Typically the edited clues for books or CDs made sense, so there's no way to catch them unless the puzzles are proofread against the originals on the PDFs.  Though doing this is more time-consuming, it allows us to replicate the original puzzles as faithfully as possible.  Thanks again for catching these edited clues, Howard!

If anyone else would like to take the self-test and help out with the proofreading, just let me know!

Today's featured puzzle, whose constructor is unknown, was published January 28, 1961; edited by Margaret Farrar; and litzed by the prolific Ralph Bunker.  Each of this puzzle's theme entries ends in a plural season (e.g., JONATHAN WINTERS); as a bonus, the constructor included the reveal entry FOUR SEASONS (clued as "One year.") at 10-Down.  I really appreciate the numerous levels of consistency this theme demonstrates:  All theme entries end in a season, all the seasons are plural, and exactly half the theme entries are people (and half places),  Having a reveal entry makes this puzzle even more impressive, and having JONATHAN WINTERS cross two other theme entries is truly spectacular!  Even though I wasn't familiar with BILL SUMMERS ("Big League umpire") or GLENS FALLS (Charles Evans Hughes's birthplace, in N. Y.), this puzzle's theme is a winner in my books.  The nonthematic fill has a slew of fun and fresh entries, such as CROSSTOWN, RAPPORT, CARBON, and, my favorite, CAMP DAVID (complete with the contemporary clue, "Where Eisenhower and Khrushchev met")!  The nonthematic fill also feels very polished—the only entries that stand out to me as being particularly unusual are AROSA ("Popular ski resort in Switzerland.") and BOSKY ("Like a dell.").  BOSKY, which has appeared in just two other pre-Shortzian puzzles so far, especially intrigued me; it turns out that this word, which Webster defines as "having abundant trees or shrubs" or "of or relating to a woods," comes from the middle English bosk (meaning "bush") and has been around since the 16th century.  In all, with its top-notch theme and smooth, sparkly fill, this is a stellar pre-Shortzian puzzle!  I hope I come across more of this mystery constructor's work as I continue to review the litzed puzzles.  For now, this puzzle's answer grid (with highlighted theme entries) can be seen below: 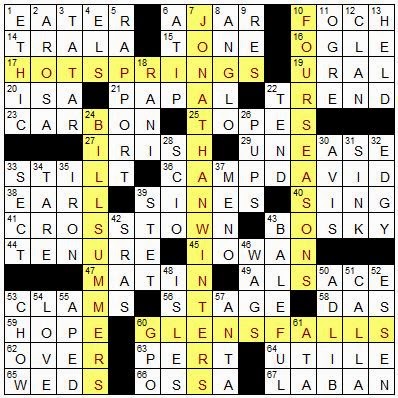 Posted by David Steinberg at 7:42 PM