It's been an amazing week on the proofreading front—I'm now sending out puzzles from 1967!  Some puzzles from 1968 and 1969 are still being proofread, but there should be another full year completed in the not-too-distant future!  This week's shipments started off late Friday night when Mark Diehl sent in 31 puzzles with 30 mistakes, which were followed the next morning by 30 more puzzles with 19 mistakes and, Saturday afternoon, by another 31 with 17 mistakes.  Sunday morning, Mark sent 31 more puzzles with 15 mistakes, then another 29 that afternoon with 11 mistakes and 31 more that evening with 21 mistakes (passing the 400 mark—congratulations, Mark!).  Monday night, Mark sent 31 puzzles with 27 mistakes, which were followed Tuesday night by 25 puzzles with 9 mistakes.  Thursday night he sent 27 more puzzles with 5 mistakes, then a couple of hours later, another 31 puzzles with 11 mistakes—wow!  Thanks so much, Mark!  Needless to say, Mark is currently in first place in the proofreading contest—as I write this, he has found 472 mistakes, and I'm guessing he'll top the 500 mark this coming week!  Thanks again, Mark—awesome job!

I recently received an e-mail from Martin Ashwood-Smith, who had found a mistake in the April 23, 1972, puzzle constructed by Eugene T. Maleska and edited by Will Weng.  The word millennium was misspelled millenium.  Maleska misspelled this word more than once:  On August 9, 1985, the word MILLENIUM appeared as a grid entry—egad!  Thanks again for pointing this out, Martin!

I also recently heard from litzer and proofreader Todd Gross, who had been researching pre-Shortzian constructors and come across some new information.  Todd found a death notice for Sidney L. Robbins, a very prolific constructor who apparently was born in August of 1909 and who, according to my (incomplete) records, published 153 pre-Shortzian puzzles and 50 Shortz-era puzzles.

Todd also thought he might have found information on Elmer Toro, who published six puzzles in the Times between 1969 and 1977:

Among several constructors I've tried to look up, Elmer Toro is a particularly interesting case.  I found someone I think is our constructor, but I'm not sure.  There aren't many Elmer Toros, but there is more than one.  The guy I think is our constructor is rather interesting, you can read about his work for the NYPD and related agencies here.  I found that he later moved to Florida, where he worked for a few years as a police officer but retired last year (2013), see here.

Today's featured puzzle, whose constructor is unknown, was published Saturday, January 21, 1961; edited by Margaret Farrar; and litzed by Ralph Bunker.  This puzzle features eight symmetrically interlocking theme entries that appeal to solvers with a sweet tooth, such as A FINGER IN THE PIE and CANDY CANE.  The puzzle masterfully uses stacking and interlock at multiple points (such as with the two down theme entries) to cram all eight sweets into the grid, though the overall quality of the theme suffers a bit as a result.  I find it slightly inelegant that two theme entries use the same sweet (PIE); also, I've never seen COOKY JAR spelled with a Y, and APPLEJACK sticks out as the only liquid sweet in the puzzle.  Still, the theme is impressive for its time, and the teenager in me has a hard time criticizing a theme that relates to junk food!  The nonthematic fill is a mix of entries that feel fresh—including BUSBOYS, HATPIN, ORBITAL (complete with the "modern" clue "Pertaining to a satellite's path."), and the quasi-thematic GINGER and ICED—and entries that are neither sweet nor savory, including SSES ("Compass points."), ATHL ("Sports: Abbr."), and ARGALAS ("African storks.").  Argala is such an uncommon term that it doesn't appear in Merriam-Webster; after Googling argala, I discovered that this type of stork is better known as the greater adjutant, which still seems rather obscure.  In sum, this puzzle has a sweet theme idea, but the execution isn't fully consistent, and the nonthematic fill feels a bit iffy in parts.  I nevertheless look forward to seeing more themed daily puzzles from this time period as we continue our journey through crossword history!  The puzzle's answer grid (with highlighted theme entries) appears below: 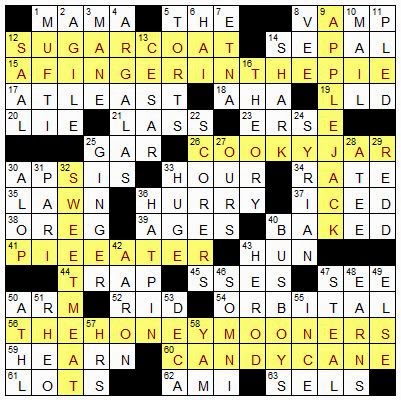 Posted by David Steinberg at 4:26 PM