Litzing Done, Proofreading Contest Under Way, 1972 Puzzles Up on XWord Info, September Litzer of the Month Tracy Bennett, and a Gem from Stan Newman's Collection

We reached another major milestone on Saturday:  The final available litzed puzzles came in, so we're now done!  We finished up one day before my goal of having all the litzed puzzles back by the end of August—thanks again, everyone!  As the litzing thermometer shows, we're at 16,077—148 puzzles shy of the 16,225 pre-Shortzian crosswords.  Most of the missing puzzles weren't published in New York because of newspaper strikes; at some point in the future, I'll continue looking into other ways of locating these puzzles.  In the meantime, thanks so much to everyone who made it happen—awesome, awesome job!

Pre-Shortzian Proofreading Challenge Gets Under Way

Here's the lowdown on the rest of this past week:  On Saturday afternoon, Tracy Bennett sent in 31 proofread puzzles.  That night, Martin Herbach sent 28 litzed puzzles, and then two minutes later, Mark Diehl sent in 31 proofread puzzles!  Monday morning, September 1, the Pre-Shortzian Proofreading Challenge officially began, and Mark sent the first batch of puzzles—26, with 16 mistakes!  A couple of hours later, he sent another 26 with 31 mistakes . . . then that afternoon, 31 more with 73 mistakes!  Late that night, Todd Gross sent in 10 puzzles with 13 mistakes.  Early Tuesday morning, Mark sent 28 more puzzles with 13 mistakes, and late that night, another 31 with 15 mistakes.  Wednesday afternoon, Todd sent 10 more puzzles with 9 mistakes, and late that night, Mark sent 31 more with 20 mistakes.  Thursday afternoon, Todd sent another 10 puzzles with 25 mistakes.  And this week Howard Barkin sent 31 puzzles with 31 mistakes.  As I write this, Mark has found the most mistakes so far (168) and is followed by Todd (47) and Howard (31)!  Great job, everyone!  If you'd like to participate in the contest, just let me know—details, along with the latest proofreading totals, can be found on the Contest Totals page.

In other news, thanks to Jim Horne, the 1972 puzzles are now up on XWord Info!  I hope you all enjoy looking through and/or solving this latest installment.  We're almost done proofreading the Will Weng puzzles—just three more years to go, most of which are done or well on their way!  I've even been sending out a few packets of Farrar puzzles for proofreading, and I expect we'll be well into the age of puzzles with periods at the ends of their clues by the time the proofreading contest winds down.

I'm also delighted to announce that New York Times constructor Tracy Bennett is the September Litzer of the Month!  In addition to having litzed 49 puzzles, Tracy has proofread hundreds more, usually sending a new batch at the end of each month.  To read more about Tracy, click here or on the Litzer of the Month tab above.

A Gem from Stan Newman's Collection

I was looking through my rapidly expanding collection of old crossword books and came across one that particularly intrigued me:  Puzzles for Everybody.  This book, which comes from Stan Newman's collection, appears to have been published in 1955.  The book is jam-packed with crosswords, anagrams, trivia quizzes, and all sorts of other word and math puzzles . . . and there's a picture of a different scantily-clad (for that time period, at least) woman every few pages whose name is incorporated into one of the puzzles!  (Since this book's publisher is Avon, referring to these women as "Avon ladies" from here on out seems fitting!)  What I find fascinating is that this book is titled Puzzles for Everybody but clearly targets a male solving audience!  The book seems to epitomize the rampant sexism during the '50s and '60s by indirectly excluding women from "Everybody."  In any case, the crosswords in this book definitely aren't as eye-catching as the Avon ladies!  To their credit, these 11 x 11s don't contain very many glaring obscurities, but they appear to rotate through the same few grid patterns and are heavy on crosswordese. The grid patterns themselves have handfuls of unsightly cheater squares, but at least there aren't too many two-letter words.  The clues are mostly standard, though there are a few clever ones, such as "It's all around you" for AIR.  I was ultimately more impressed with some of the novel variety puzzle forms in this book than with the crosswords.  One of my favorites was a letter maze that, when traced properly, spelled the 8-word, 39-letter phrase KEEP DIGGING AND YOU WILL EVENTUALLY LOCATE IT!  In sum, this puzzle book was quite entertaining to look through, and the Avon ladies definitely distinguished it from some contemporary volumes I've thumbed through.  Here are some pictures of Puzzles for Everybody:

Today's featured puzzle, whose constructor is unknown, was published June 28, 1961; edited by Margaret Farrar; and litzed by Nancy Kavanaugh.  Instead of going with the traditional themeless structure from this time period (four corners with scores of seven-letter entries), the constructor of this sparkly 70-worder opted for a more sectioned-off grid with numerous wide-open spaces.  I don't think I've seen such a grid in a pre-Shortzian puzzle—I really appreciate the creativity and ambitiousness of this design!  The 6 x 5 chunks in the upper right and lower left are particularly visually appealing, and the middle and remaining two corners don't disappoint aesthetically.  Highlights in the fill include PARSEC, KNIVES, SANS SERIF, WIREMAN, SUNDAE, and SLIPPERS; also, although I've never heard of QUANTICO (clued as "Marine Corps base in Virginia."), it sounds nice and uses a Q.  What really makes this puzzle stand out, though, is that the fill is almost junk-free:  The only two entries that seem unreasonably obscure are RABIC ("Pertaining to hydrophobia.") and CUNEO ("Wedge-shaped: Comb. form.)—very impressive given the challenge posed by the grid structure!  The clues are mostly standard definitions—the only one that really gave me pause was "Former monetary units of Lithuania." for LITS.  This is exactly the type of clue that proofreader Todd Gross would cite as being unnecessarily obscure; I would have much preferred something like "Wagons-___ (sleeping cars)."  Nevertheless, this puzzle feels very strong on the whole, and I look forward to seeing more creative themeless grids as I continue looking through puzzles from the the early '60s and late '50s!  For now, this puzzle's solution can be seen below: 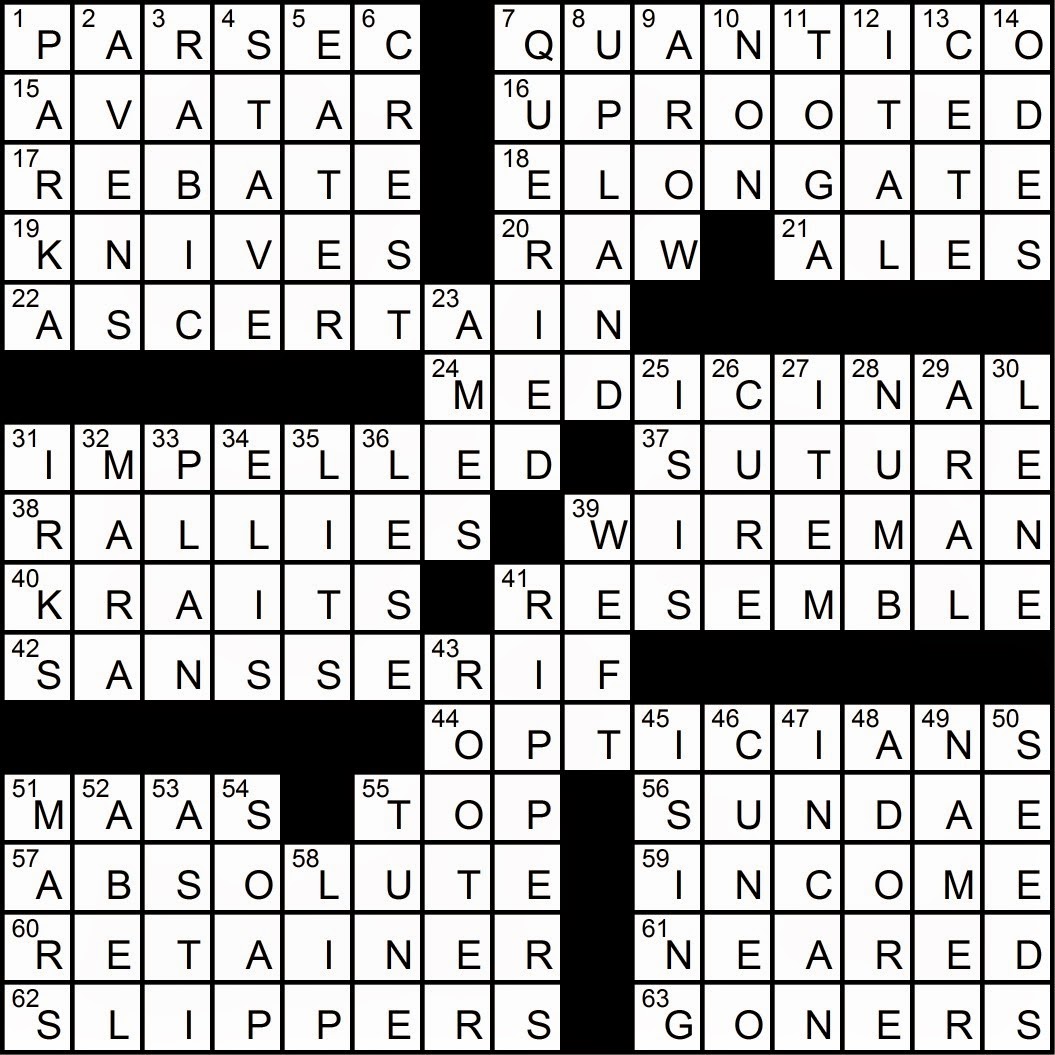 Posted by David Steinberg at 8:55 PM