I'm very excited to announce a new section of the Pre-Shortzian Puzzle Project website:  Pre-Shortzian Constructor Interviews!  Over the next few years, I'm going to try to interview as many living pre-Shortzian constructors as possible to get a better sense of what pre-Shortzian construction and editing were like.  I'll be posting the interviews on this new page.  I'm even more delighted to report that the first interview is with Artie Bennett, the youngest crossword constructor ever published by The New York Times.  Artie was just thirteen (and ten months, to be exact) when his record-breaking first daily puzzle appeared (and fifteen when his first Sunday crossword was published).  Artie's reflections on crossword construction and the pre-Shortzian world are a fascinating read! 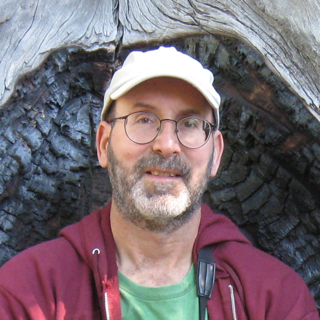 I first heard about Artie in an e-mail Will Shortz forwarded to me this past January.  Artie had written to Will about the youngest-constructor records.  Artie thought he might have been the youngest constructor ever published by the Times, but he didn't have a copy of his daily puzzle and didn't remember when exactly it was published.  Will told Artie about my efforts to build a database of pre-Shortzian puzzles (the beginning of what was to become the Pre-Shortzian Puzzle Project) and suggested that Artie and I might be able to work together to find the date of Artie's debut puzzle.

With the help of some details Artie was able to remember about the puzzle and the approximate time it might have appeared, I began downloading PDFs of crosswords from those years, looking for particular entries as the puzzles downloaded and then sending the files in monthly batches to Artie so he could look through them in more detail.  After searching through months of PDFs, Artie found what he was looking for—just five days after I'd received the initial forwarded e-mail from Will!  His puzzle had been published on May 22, 1969, making him the youngest constructor ever to be published in The New York Times!  Congratulations again, Artie—that was an amazing achievement!

Artie and I finally got to meet each other in person at this year's ACPT—below is a picture of us there: 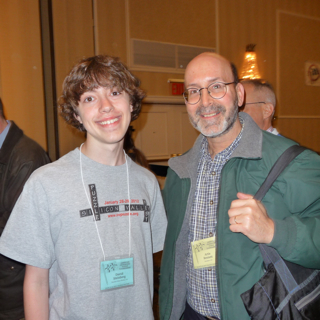 Today's featured puzzle is Artie Bennett's record-breaker!  As stated above, it was originally published on May 22, 1969, and was recently litzed by yours truly.  The grid has lots of Scrabbly letters—I especially like the entries TWEEZER, NOSEGAY, and SAVED UP!  My favorite entry in the puzzle, though, is definitely OSCULATE (clued as "Kiss."), because it is such a cool word.  Artie even mentioned that he wasn't very into osculating at the time he submitted this puzzle to Will Weng!  I also really like how 1-Across and 1-Down are homophones.  Overall, this puzzle is a very nice Will Weng–era themeless and a stellar debut for such a young constructor!  The answer grid can be seen below: 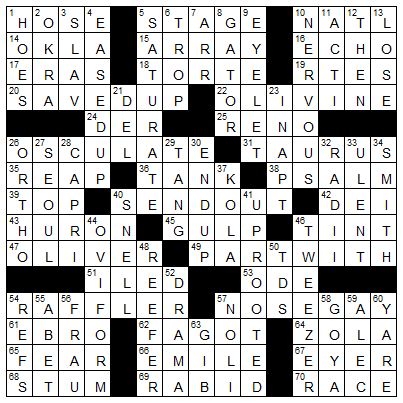 Today's featured pre-Shortzian entry is STUM.  According to the Ginsberg database, STUM has appeared in just two Shortzian puzzles.  STUM originally appeared in Artie's puzzle (the puzzle of the day) and was clued as "Unfermented grape juice."  Britannica's definition of stum is as follows:  "STUM, in the wine trade, is a name for the unfermented juice of the grape, when it has been several times racked off and separated from the sediment.  The casks are, for this purpose, well fumigated with brimstone, in order to prevent fermentation, through which the juice would become wine."  Below is a picture of some unfermented grape juice: 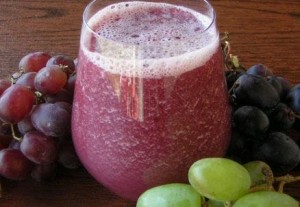