3,500 Puzzles Litzed, Posting Frequency, and a New Litzer of the Month

I'm thrilled to announce that we've now passed the 3,500 mark on our litzing thermometer!  This is a major achievement—soon we'll be at 4,000 litzed puzzles and almost one-quarter of the way through the whole project!  We're also just finishing up sending out 1985 puzzle packets—in a few days, we'll be into 1984!

Things have gotten much busier at "Litzing Headquarters" since I started school on Tuesday.  Unfortunately, I probably won't be posting as frequently now, though I'll try to put out a new one every week or so—most likely over the weekends.

We have a new Litzer of the Month:  Mark Diehl, who has litzed an incredible 653 puzzles since the end of June!  This is an amazing accomplishment—I suspect Barry Haldiman's long-standing record might be in danger!  Be sure to check out Mark's interview, which is a really enjoyable read.  (For a clickable list of all the Litzer of the Month interviews, please see the new Litzers of the Month gadget beneath the Blog Archive list on the right-hand side of the page.)

Today's featured puzzle was constructed by Virginia L. Yates.  It originally appeared on June 9, 1986, and was recently litzed by Todd McClary.  This puzzle is far superior to the typical pre-Shortzian Monday offering, both in the number of theme entries and in the complexity of the theme.  Almost every pre-Shortzian Monday puzzle I've seen so far has a repeated word theme gimmick with three or four theme entries.  Shockingly (pun intended), this puzzle has six beautifully interlocking theme entries that relate to electricity!  In addition, almost all the theme entries are clued in a nonelectrical sense.  For example, SPARK PLUG is clued as "Motivator" and POWERHOUSES is clued as "Fireballs."  Finally, the fill is very clean and brimming with Scrabbly entries like FOXY and ZANY.  I also really like that SISSY and SASSY cross each other!  Admittedly, ITEA, OGEES, and ERNE aren't great, though just three questionable entries is very unusual for a pre-Shortzian puzzle.  All in all, this is a tour-de-force Monday crossword, and I hope to see many more like it as litzing continues!  The answer grid (with highlighted theme entries) can be seen below: 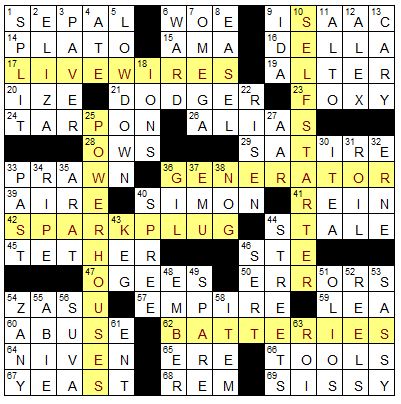 Today's featured pre-Shortzian entry is ATTAI.  According to the Ginsberg database, ATTAI has never been reused in a Shortzian puzzle.  ATTAI originally appeared in the October 26, 1985, puzzle by Jeffrey A. Mercer, which was recently litzed by Tom Pepper.  The original clue for ATTAI was "Lion-faced warrior of Gad."  According to Smith's Bible Dictionary, Attai was "one of the lion-faced warriors of Gad, captains of the host, who forded Jordan at the time of its overflow and joined David in the wilderness (1 Chronicles 12:11)."  Since I couldn't find a picture of Attai (perhaps because he wasn't a major Biblical character), below is an awesome picture of an angry lion: 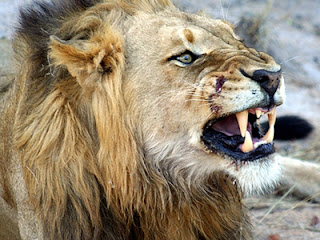 Posted by David Steinberg at 2:53 PM