Interview with the Legendary Manny Nosowsky, T-shirts, Contest, and Puzzazz

I'm delighted to announce that an interview with the legendary Manny Nosowsky is now posted!  To date, Manny has had an incredible 254 crosswords published in The New York Times, making him the most published Shortz-era constructor!  When pre-Shortzian constructors are counted (based on the current incomplete list), only Jack Luzzatto, William Lutwiniak, and Eugene T. Maleska himself have published more than Manny.  Manny published eight pre-Shortzian puzzles, all of which contain minimal obscurity and interesting, solid fill.  Later in this post I'll be highlighting one of Manny's many masterpieces! 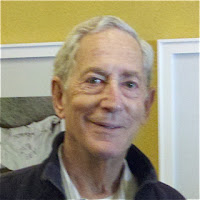 In other news, the Pre-Shortzian Puzzle Project now has its own T-shirt!  The front features a picture of the first New York Times puzzle grid with "I Came, I Litzed, I Conquered" written above it, and the back summarizes the project.  To view the full design and for details about how to order the T-shirt, click on the link above or the new T-shirts tab at the top of this page.

Also, on Monday, October 1, the first Pre-Shortzian Puzzle Project contest will begin and is open to everyone!  During the month of October, I'll be tracking how many litzed puzzles come in from anyone who litzes a packet of puzzles (usually six or seven crosswords).  If you haven't litzed before and own construction software and/or know how to litz in text files, this would be a great time to try it out!  At the end of the month, the three people who have litzed the most puzzles in October will receive free Pre-Shortzian Puzzle Project T-shirts; the person with the highest total during October will also receive an interview and writeup on the website.  Current litzers will have their October totals added to their regular totals, but previous totals will not count toward the contest, so everyone will start at 0.

One reason for starting everyone at 0 for the contest is because of litzer Mark Diehl's prodigious output!  Mark has now litzed more than 1,000 puzzles and is well on his way to setting an all-time litzing record!  And with everyone else's help too, we have now passed the 4,200 mark on the litzing thermometer and are sending out the first few PDF packets from 1982.  Terrific work, everyone!

I've added a new feature to the righthand column:  puzzle publisher Puzzazz's puzzle of the day (or Puzzazz of the Day, as they call it!).  It's free and lots of fun!  Puzzazz recently launched its very cool new app for the iPad, iPhone, and iPod Touch and released 29 new puzzle ebooks (including mine, which is called Chromatics, and litzer Vic Fleming's, titled I Swear).  The complete list of authors includes many New York Times crossword constructors.

Today's featured pre-Shortzian puzzle was constructed by Manny Nosowsky.  It was originally published on August 27, 1992, and was litzed by Barry Haldiman (or one of his former litzers).  This was Manny's debut New York Times puzzle.  It features the phrase "crossword puzzle" translated into German, Russian, and French, as well as the defining entry CROSSWORD PUZZLE.  It must have been a very lucky coincidence that all these entries fit symmetrically—wow!  The nonthematic fill is very solid and clean, and  the clues have a nice sparkle to them.  Some of my favorite clues are "It can thicken" for PLOT and "Seas or sees lead-in" for OVER.  In sum, this is an excellent construction and a real standout among pre-Shortzian puzzles!  The complete puzzle can be seen on XWord Info; the answer grid (with highlighted theme entries) can be seen below: 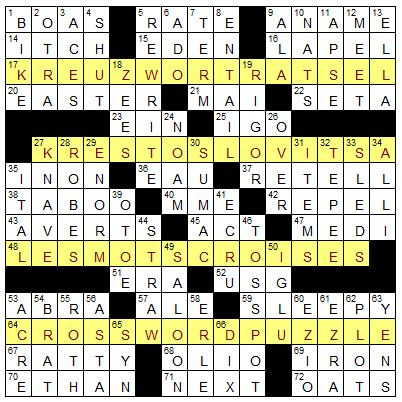 Today's featured pre-Shortzian entry is ISOHEL.  According to XWord Info, ISOHEL has appeared in just two pre-Shortzian puzzles, one of which was constructed by Manny Nosowsky.  ISOHEL appeared in Manny's December 26, 1992, puzzle, which was litzed by Barry Haldiman (or one of his former litzers).  The clue for ISOHEL was "Map line showing equal hours of sunshine."  Webster defines an isohel as "a line drawn on a map or chart connecting places of equal duration of sunshine."  Since I couldn't find a good picture of an isohel, below is a picture of the shining sun: 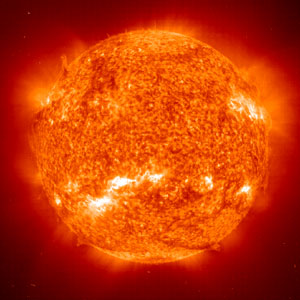 Image courtesy of HowStuffWorks.
Posted by David Steinberg at 9:23 PM