The 1989 puzzles have now been posted on XWord Info!  Our proofreaders did an excellent job, and Jim Horne made some of the more unusual 1989 puzzles look fantastic!  My favorite puzzle Jim fixed is Frances Hansen's FACE rebus—he was able to insert images of a happy face where they belonged and, as in the original puzzle, even put in an image of a sad face for the entry PULL A LONG FACE!

In other news, the Pre-Shortzian Puzzle Project received some more great publicity this week!  Amy Reynaldo blogged about it on Tuesday, and Jim Horne wrote another blog post with an awesome Pre-Shortzian crosswordese quiz (which I'm ashamed to say I failed miserably!).

As the month winds to a close, the October litzing contest is still going strong!  Mark Diehl remains in the lead with 187 litzed puzzles; Jeffrey Krasnick, who is in second place, has litzed 73 puzzles so far; and our current third-place litzer, Bob Jones, has litzed 61 puzzles.  C. G. Rishikesh has moved up in the ranks very fast and is only a few puzzles behind Bob, and Nancy Kavanaugh isn't far behind Rishi.  There are still 11 more days to continue litzing—third, second, and even first (well, not likely!) place could easily change over this time period.  Keep up the great litzing, everybody—the contest should have a very exciting finale!

I'm also happy to report that we just sent out the first few packets from 1980!  In addition, we're rapidly approaching the 5,000 mark on the litzing thermometer—we whizzed past the 4,800 and 4,900 marks earlier this week.  At this rate, we should hit 5,000 before the end of next week!

In addition, the fourth poll has come to a close.  The poll asked readers which features of the weekly blog posts they liked best (or wanted to see, if the features didn't already exist).  No feature received all 7 votes, though funny typos came awfully close with 6 (85%).  Other popular features, each with a total of 5 votes (71%), included project news updates, trends in old puzzles, and the still-to-be-developed clue of the day (which I've decided to make a regular feature because of the poll!).  Publicity updates, poll results, and the puzzle of the day received 4 votes apiece (57%), while only 3 respondents (42%) voted for the entry of the day.  Overall, the results of this poll are inconclusive—it seems like all the features in the weekly posts are generally well liked.  Thanks to everyone who voted!

I've just posted a new poll, which asks you to vote on whether you'd rather read shorter posts twice a week or longer posts once a week.  If you have an opinion about this, be sure to vote!

As the proofreading has continued, we've come across many more humorous typos!  Below are a few of the funnier mistakes we've caught over the past few weeks:

Perhaps the most amusing recent typo was a clue for LOPE that was entered as "Easy cantor" rather than "Easy canter"!  I can't think of a single legitimate entry for the clue "Easy cantor"—if you have any ideas, please comment, and I'll post a recap next week!

Today's featured puzzle, "Fractured Phrases," was constructed by Charles M. Deber.  It was originally published on October 30, 1988, and was litzed some time ago by Barry Haldiman (or one of his former litzers).  I'm a huge fan of Charles M. Deber puzzles, and this one was certainly no exception.  It features ten symmetrical phrases about fracturing that are "broken" with blank squares.  Even better, all the breaks literally occur within the word being fractured.  Best of all, the five blank squares are consistent with the Across and Down entries!  For example, DIVISION OF LABOR is fractured between the "L" and "A"; crossing it is PART COMPANY, which is fractured between the "M" and "P."  The fill is almost spotless and very lively in parts—CRANBERRY and LOTTERY are particularly fun entries.  This is definitely one of the best pre-Shortzian puzzles of all time, and I hope to encounter many more like it as we continue to approach the Will Weng era!  The answer grid (with highlighted theme entries) can be seen below: 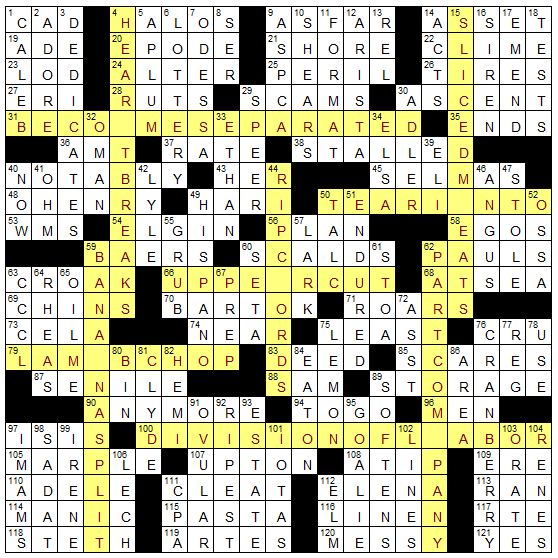 In lieu of an entry of the day, today's featured clue originally appeared in the June 7, 1984, puzzle by Edward Bobb, which was recently litzed by Barry Haldiman.  The clue for WIRE was "Litz, e.g."  According to the Ginsberg database, this clue has never appeared outside of pre-Shortzian puzzles!  Webster defines "litz wire" as "a wire composed of individually enameled copper strands braided together to reduce skin effect and consequent high-frequency resistance."  Litz derives from the German litzendraht (not from Litsoft, as one would like to believe!).  "Litze" means braid, cord, or lace; "draht" means wire.  Below are pictures of the two different definitions of litz.  Litz as a noun appears on the left; litz as a verb appears on the right.

Posted by David Steinberg at 9:59 PM