Another Contest Update, a New Litzing Record, and More Publicity

There are only three more days until the October litzing contest comes to a close!  Since the last update on Thursday, litzers have converted many more puzzles—there has been such a rapid influx this week that we passed both the 5,000 and the 5,100 marks and are only a few packets away from 1979!

Now for the current contest totals:  Mark Diehl has litzed 247 puzzles; Jeffrey Krasnick, 121; and Bob Jones, 81.  Mark Diehl has now litzed so many puzzles that he's passed Barry Haldiman and his former team of litzers in the litzer totals!  With a total of 1,266 puzzles, Mark is now officially the King of Litzing!  Congratulations, Mark, and thanks for all your amazing work!  Thanks, too, to everyone else—every litzed puzzle gets us closer to our goal, and we're always looking for more litzers.  Even if you only have time to litz one week—or just part of a week—we want to hear from you, because that will really help!

In other news,  New York Times Wordplay blogger Deb Amlen recently used the XWord Info database with the pre-Shortzian puzzles to track the history of the entry TOSSPOT in New York Times puzzles.  She found that TOSSPOT had been used more frequently in pre-Shortzian puzzles than in Shortz-era puzzles!  I'm amazed that Maleska puzzles used this entry so much more frequently, especially since TOSSPOT is more risqué than what Maleska traditionally allowed in puzzles.  Then again, I've come across a surprising number of edgy, even potentially offensive, entries in Maleska puzzles, such as SLUT (used in at least three puzzles), the pun SEX CYMBAL, and ECDYSIAST.  Maleska was known for being on the more traditional/old-fashioned and literary side—he was very averse to brand names and even went so far as to reject one puzzle solely because he didn't feel that CAR SEAT was in the language!  So I find it very interesting that Maleska allowed these edgy entries.

Before I get to the puzzle of the day, here are a few more news items and updates:
Today's featured puzzle was constructed by Jim Modney.  Jim Modney's style was sort of like that of George P. Sphicas—he tended to use wide-open grids with well-researched, interesting, and groundbreaking themes.  This puzzle, which was originally published on April 17, 1982, and which was recently litzed by Andrew Laurence, is certainly no exception.  The puzzle is very elegantly constructed—not only does it contain many more X's than average (7), but the blocks near the center of the puzzle also form an X shape, making it the only pre-Shortzian puzzle I've seen so far to use grid art!  Naturally, the fill is very Scrabbly—I especially like the entries FLEXING, SANDBOX, and SPHINX.  Interesting entries without X's include FLATTOP, TRAFFIC, and NABBING.  Overall, this is a very innovative and unusual pre-Shortzian puzzle!  The answer grid, with highlighted X's, can be seen below (for a more modern take on the X theme, be sure to check out this impressive Oliver Hill puzzle from 2007): 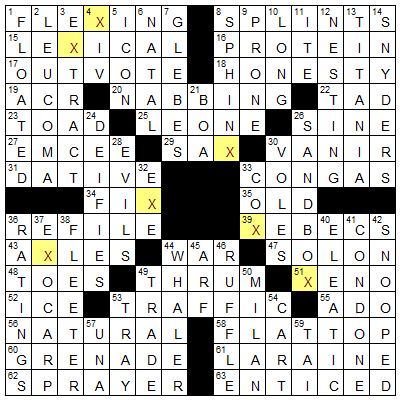 Posted by David Steinberg at 3:01 PM