Great news:  The October litzing contest has been a real success so far!  It's incredible that litzers have sent in 161 puzzles in just five days—I have a feeling it's going to be a real tooth-and-nail battle for the free Pre-Shortzian Puzzle Project T-shirts!  This rapid spurt of litzing pushed us way past the 4,400 mark; as of right now, Mark Diehl is in first place with 36 litzed puzzles, Barry Silk has 25, and Joe Cabrera has 21.

October's Litzer of the Month is super-fast typist Angela Halsted!  In addition to being a New York Times crossword constructor, Angela has also found time to litz 199 puzzles—great job, Angela!

In other news, the results of our second poll came in on Tuesday!  The poll asked which pre-Shortzian editor published the best puzzles.  Coincidentally, we had the same number of respondents to this poll as to the last poll.  Of the seven readers who voted, one (14%) preferred Eugene T. Maleska.  Will Weng and Margaret Farrar got three votes (43%) each.  I'm a little surprised that only one respondent voted for Eugene T. Maleska, especially since we've primarily been litzing Maleska-edited puzzles.  As we've seen, very high quality puzzles can be found throughout the pre-Shortzian era.  Thanks to everyone who voted!

I just posted a new poll, which asks you to vote for pages and gadgets you like and would like to see continue on this site.  Be sure to vote for all your favorites—pages and gadgets that don't receive any votes may end up on the chopping block.  If you have suggestions for additional pages or gadgets, please comment or shoot me an e-mail (for the address, please refer to the Contact page).

Before getting to the puzzle of the day, I thought I'd share a few more funny typos our proofreaders have caught:
My personal favorite of the recent litzing typos, though, was the clue "Telepathic sounds," rather than "Telegraphic sounds," for DITS!  Usually litzing mistakes are few and far between—in fact, our proofreaders have come across many error-free puzzles.  But it's always a nice change of pace when we find humorous typos!

Today's featured puzzle, "No Big Deal," was constructed by Charles M. Deber, whom I had the pleasure of meeting at the ACPT this year!  The puzzle was originally published on August 22, 1982, and was litzed by Barry Haldiman (or one of his former litzers).  This brilliant puzzle features ten symmetrically interlocking pairs of theme entries with card-related clues but with no connection to cards!  Each pair of theme entries is divided up by an ampersand.  For example, "Pair of queens" leads to MARIE & ELIZABETH, and "Pair of jokers" leads to HOPE & BALL.  Some other very clever theme entries/clues are "Pair of aces" for EVERT & BORG and "Pair of jacks" for SPRAT & KENNEDY!  There is hardly any obscurity in the nonthematic fill, which is very impressive considering the quantity of intersecting theme entries.  I'm not overwhelmingly fond of ACIDE (clued as "Tart, in Toulouse") or SORB (clued as "Service tree"), though the awesome entries LIBIDO and WINE LIST certainly make up for the more arcane ones.  All in all, this Sunday puzzle is a masterpiece!  The answer grid with highlighted theme entries can be seen below: 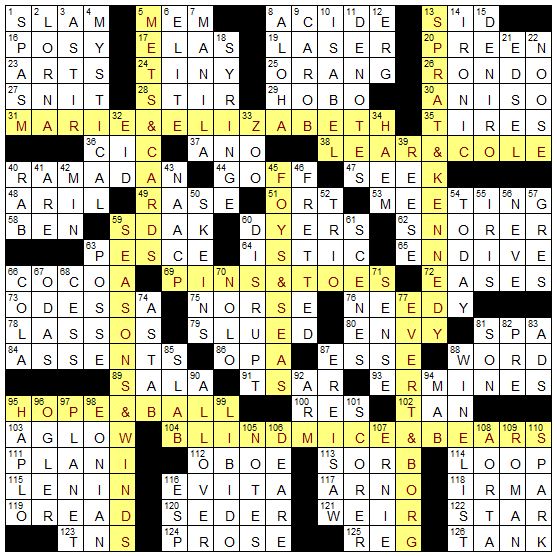 Today's featured pre-Shortzian entry is DEIPNOSOPHIST.  Not surprisingly, DEIPNOSOPHIST has never been reused in a Shortz-era puzzle (though it has appeared in a pre-Shortzian 1993 puzzle).  DEIPNOSOPHIST originally appeared in the June 23, 1984, puzzle by I. Judah Koolyk, which was recently litzed by Garrett Hildebrand.  The clue for DEIPNOSOPHIST was "One adept at table talk."  Webster defines a deipnosophist as "a person skilled in table talk."  Deipnosophist is derived from "Deipnosophists," a work published in 200 A.D. by the Graeco-Eygptian author Athenaeus about a banquet where long discussions  take place.  Etymologically it comes from the Greek words "deipnon" (meaning "meal") and "sophistes" (meaning "wise man").  Since I couldn't find a great picture of a deipnosophist, below is a picture of an ancient banquet: 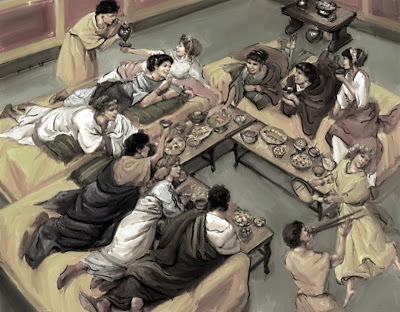 Image courtesy of The Garden of Eaden.
Posted by David Steinberg at 10:27 PM