We've made amazing progress this past week, whizzing past the 4,500, 4,600, and 4,700 marks within just days and sending out more than half of the 1981 puzzles!  This Monday must have been the record for the greatest number of litzed puzzles received in a single day:  66!  I was busy looking at newly litzed puzzles for more than an hour after getting back from school.  Mark Diehl is still in first place to win one of the three T-shirt prizes this month, with an incredible 123 litzed puzzles in just 14 days!  Jeffrey Krasnick is in second place, with 46 puzzles; and Bob Jones is in third, with 42 puzzles.  Nancy Kavanaugh, who has litzed 41 puzzles this month, is right behind Bob, with other litzers not far behind—it's going to be an exciting race to the finish!  Remember, there will be free T-shirts for the top three October litzers!

In other news, the results of our third poll are now in.  The poll asked readers to vote for which features and gadgets they liked the best and wanted to see continue on the site.  This time we had a total of eight respondents.  The most popular features and gadgets, with seven votes (87.5%) each, appear to be the Litzer Totals and Pre-Shortzian Editors pages.  Other popular features, with six votes apiece (75%), include the Litzing Thermometer, Litzer of the Month, and Pre-Shortzian Constructor Interviews.  Not too far behind these are the Poll and Meet the Litzers, with five votes (62.5%) apiece.  Surprisingly, the least popular feature, with only three votes (37.5%), is the T-shirt!  I'm wondering why the T-shirt received so few votes—whether it was because voters weren't interested in T-shirts or participating in the contest or because they didn't like the design.  If you didn't vote for the T-shirt and have suggestions for improving the design in the future, when we may make an additional T-shirt, please send me an e-mail.  Thanks to everyone who voted—your opinions are very helpful as I continue to develop this site!

The Pre-Shortzian Puzzle Project just received some more great publicity!  The Orange County Register interviewed me about the project, among other things—the part about the project is about halfway through the article.

As litzers have continued to send back puzzles from the early 1980s, I've noticed several interesting trends and differences between these Maleska-edited puzzles and those from the later 1980s and early 1990s.  First, there appear to have been many more puzzles (both dailies and Sundays) with snappy original verse themes published during the early 1980s.  For example, a 1982 puzzle constructed by C. J. Angio featured the original joke I PLAYED THE ORGAN/BUT MY MONKEY DIED; similarly, a 1983 puzzle constructed by Eugene T. Maleska himself featured the original verse THAT CIGAR TASTED/LIKE SOME OLD ROPE/O WELL JUST SKIP IT.  As time progressed, constructors seem to have moved away from these verse puzzles.  To my knowledge, the only constructor who consistently published original verse puzzles throughout the 1980s and early 1990s was the brilliant and humorous Betty Jorgensen.

Also, themelesses from the early 1980s seem to be of much higher quality—they generally had fewer words and less esoterica than Maleska puzzles published later on.  Many of these themelesses were built by constructors who had been publishing puzzles in The New York Times since Margaret Farrar's editorship, such as Louise Earnest and Kathryn Righter.  Even better, some of these themelesses had clever minithemes!  A few of my favorite themeless/low word-count constructors from this time period are William Lutwiniak, George P. Sphicas, and Ernst Theimer.  The latter, for example, published a 1983 puzzle that had just 68 words featuring the four interlocking theme entries TREASURE MEASURE, GRUESOME TWOSOME, GLUTTONS BUTTONS, and PLEASURE LEISURE!  The puzzle had a remarkably clean fill as well.  George P. Sphicas admirably filled wide-open grids, not uncommonly stacking three 13- to 15-letter theme entries on top of each other.  And William Lutwiniak published many Scrabbly (and often pangrammatic) themelesses around this time—he was the Barry Silk of the Maleska era!

The early 1980s did yield better themelesses and a whole slew of original quote themes, though I must say that many of the Sunday puzzles from back then were not as high quality or original as the ones from later on.  There was an occasional Charles M. Deber, Maura B. Jacobson, A. J. Santora, Alfio Micci, or Anne Fox masterpiece to spice things up; the Sunday puzzles from back then, however, were generally much more literal and less creative.  I read somewhere that Maleska even published a Sunday repeated word theme early on during his editorship!  Speaking of repeated word themes, I was surprised to notice that they were published almost equally as often during the early 1980s and late 1980s—I'd been expecting there to be many fewer repeated word themes in the later years, since themes had had more time to develop.  All in all, I've concluded that repeated word themes were an indispensable early-week staple throughout the Maleska era.  I'm looking forward to seeing what Maleska's style in the late 1970s was like (and eventually to finding trends in Will Weng and Margaret Farrar puzzles from even earlier)!

In the spirit of litzing the earlier Maleska puzzles, today's featured puzzle is from the first batch of 1981 puzzles I received.  It was constructed by Anne Fox, originally published on December 27, and litzed by Bob Jones.  Anne Fox was the grandmaster of verse themes—the puzzle below features nine intersecting 23-letter seasonal verses and messages!  She constructed this and many other puzzles so elegantly that I now use the adjective "Foxesque" to describe puzzles with amazing theme density and interlock!  This is a truly incredible feat of construction—just imagine how much research and time must have gone into getting theme entries of the right length to perfectly intersect each other without the Internet.  Plus, in addition to the nine intersecting 23-letter theme entries, this puzzle is also a pangram and has a relatively clean fill.  I especially like the entries EQUALIZE, SLEAZY, ALONZO, and PIRACY.  All in all, this is an outstanding pre-Shortzian puzzle that would still be daunting to construct, even with computer software.  The answer grid (with highlighted theme entries) can be seen below: 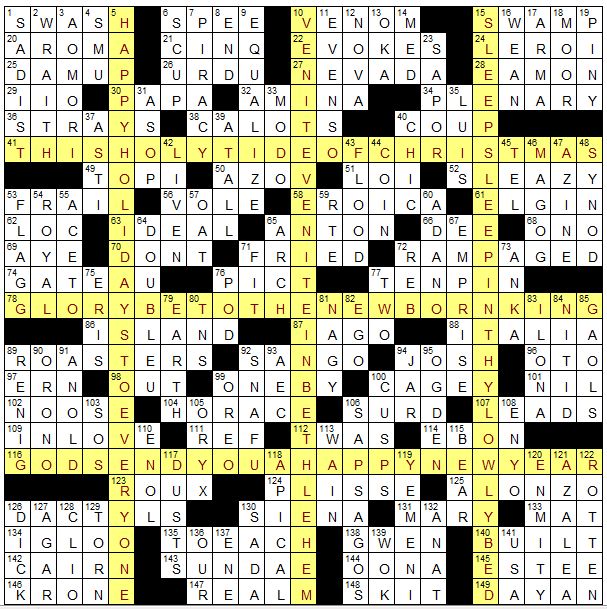 Today's featured pre-Shortzian entry is POPOCATEPETL.  According to the Ginsberg database, POPOCATEPETL has never been reused in a Shortz-era crossword.  It originally appeared in the March 5, 1983, puzzle by Kay Sullivan, which was recently litzed by Vic Fleming.  The clue for POPOCATEPETL was "Mexico's 'Smoking Mountain.'"  Webster defines Popocatepetl as a "volcano 17,887 feet (5242 m) SE cen Mexico in Puebla."  Britannica notes that Pococatepetl, after being inactive for 70 years, erupted in 1994, 1996, 1997, and 2000, forcing thousands of villagers to evacuate.  Below is a picture of this very active and unpredictable volcano: 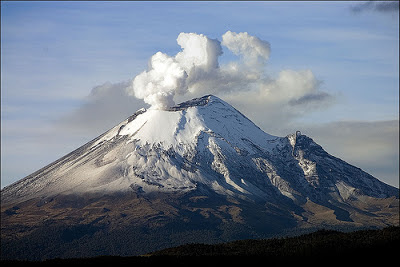 Image courtesy of Mysterious Universe.
Posted by David Steinberg at 7:33 AM