This will be another shorter and earlier post than usual, because I'm busy catching up with all the work I missed while at the ACPT—and tomorrow I'm leaving for the California Junior Classical League State Convention in Irvine.  My posting should get back to its regular schedule next week, though; in the meantime, the new Pre-Shortzian Puzzle Project Twitter page will have any news that comes up between now and then!

First, the ACPT . . . it was awesome!  I had so much fun meeting, reuniting with, and talking to everybody!  The litzer get-together on Friday afternoon was more sparsely attended than I'd expected, since quite a few people had their flights delayed by the bad weather in New York.  Still, several litzers were able to stop by, and we made it through at least some of the Oreos (though I brought back an unopened package on the plane!).  I met up with other litzers later; all told, there were 15 litzers (including me) at the ACPT—Howard Barkin, Peter Broda, Joe Cabrera, Andrew Feist, Vic Fleming, Mangesh Ghogre, Angela Halsted, Jeffrey Harris, Jeffrey Krasnick (wearing his Pre-Shortzian Puzzle Project T-shirt!), Andrew Laurence, Parker Lewis, Tom Pepper, Doug Peterson, and Brad Wilber!  (If I've left anyone out, please let me know—it was all a whirlwind!)  I'll be sure to schedule any future litzer parties for sometime later that weekend so everyone will have arrived.  Here are a few litzer photos:


On Friday night, I gave a short talk about the Pre-Shortzian Puzzle Project—you can see a video of it below (or here on YouTube)—just click on the arrow to play it.  (Warning:  The video is a bit shaky at first, but it gets better quickly.)


In the video, I mention a flyer with a Will Weng–edited puzzle.  Unfortunately, because of a mix-up, that wasn't available, but if you'd like to try your hand at the amazing Dorothea E. Shipp 23 x 23 puzzle "Every Which Way" that was on the back of the flyer, I've posted it on Scribd, and you can download it here.  I'll post the solution next week.

You can see more ACPT photos and videos (as well as lots of interesting results!) by scrolling down on the official tournament Web site here.

In other news, I'm delighted to report that Twenty Under Thirty is now available!  Twenty Under Thirty is a collection of crosswords edited by Ben Tausig and written by twenty constructors under the age of thirty, including three litzers—Peter Broda, me, and Alex Vratsanos!  A PDF of the book is $5 and will be e-mailed to you; to order a copy, click here.

Finally, even with all the events of this past week, the litzing continued!  On Sunday, Mark Diehl sent in 13 puzzles and put us over 8,400 on the litzing thermometer—at this rate, I think there's a chance we'll be finished with all the litzing (though not all the proofreading!) within the next year or so!  Thanks again, everybody!

In honor of Joe Krozel's amazing 18-blocker that will appear in tomorrow's New York Times, today's featured puzzle has the lowest block count I've seen so far in a pre-Shortzian puzzle:  23.  XWord Info lists just 7 puzzles that contain 23 blocks, all of which were published in the Shortz era when computer software was available.

This lovely Maleska-edited puzzle, which was constructed by Adelyn Lewis and litzed by Jeffrey Krasnick, was originally published on January 13, 1979.  The fill is almost junk-free, and the constructor even managed to throw in a repeated prefix theme consisting of four intersecting 15-letter entries—wow!  The fill's highlights include ARSONIST, DEEP-SET, and BAD TIMES (cleverly clued as "Depressions and recessions").  The partial DE SACS and the French TAVERNE aren't my favorites, but they're a small price to pay for an otherwise brilliant, ahead-of-its-time puzzle!  The answer grid (with highlighted theme entries) can be seen below: 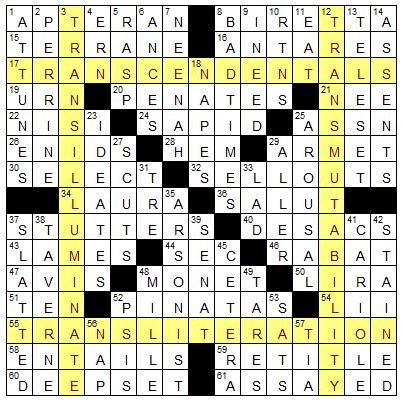 I can imagine that many solvers took offense at the entry WETBACK, which appeared in the May 27, 1986, puzzle by Burns (first name unknown) that was recently litzed by Bob Jones.  Maleska's clue for WETBACK was simply "Illegal border crosser."  However, I also encountered the entry WETBACK (at 1-Across) in the May 7, 1951, puzzle by Jack Luzzatto, which was recently litzed by yours truly.  I couldn't believe that Margaret Farrar published the clue "Mexican smuggled over the Rio Grande"!  The breakfast test must have had a very different meaning back in 1951.

On a more positive note, I saw a very clever clue for ANT in the March 24, 1951, puzzle by Harold T. Bers, which I also litzed:  "Small red socialist."  This clue was not only very current but also exceedingly clever for its time.  Bravo, Mr. Bers!  Below is a picture of a red ant:

Posted by David Steinberg at 10:10 PM