Publicity, Solution to Puzzle, Over 8,500, and Funny Typos

The Pre-Shortzian Puzzle Project has received some more great publicity in the past couple of weeks!  Will Shortz's 2013 American Crossword Puzzle Tournament page linked to this blog, and litzer Jeffrey Krasnick mentioned the project in a comment on Amy Reynaldo's Diary of a Crossword Fiend.  Then Rex Parker (who, together with Matt Gaffney, will be discussing pre-Shortzian puzzles on this site in the near future) wrote about the project in his blog.  Thanks so much, everybody!

In other news, the solution to the Dorothea E. Shipp puzzle I posted on Scribd last week is now available—click here to see it.

Even though the second litzing contest has long since ended, we've continued to make excellent progress!  Denny Baker sent in several batches of puzzles that almost brought us to 8,500, and then on Tuesday, Jeffrey Krasnick put us over this major milestone!  We're currently sending out packets from March 1971, which is mind-blowing!

Before I get to the puzzle of the day, here are ten more funny typos our proofreaders have caught, which I've listed below in a new format:

Today's featured puzzle was constructed by Elaine D. Schorr.  I've seen lots of great Will Weng–edited crosswords by this constructor, many of which are lovely minithemes crammed into wide-open themeless grids.  Originally published on January 1, 1974, and recently litzed by Mark Diehl, this outside-the-box crossword features four simple math problems that lead to the digits 1, 9, 7, and 4, to kick off the year 1974!  It's very rare to see math in crossword puzzles, period (outside of the dreaded Roman numeral clues), let alone in pre-Shortzian puzzles.  This may in fact be the earliest puzzle to use math in a crossword!  The constructor not only included the four (albeit a bit forced) 15-letter math problems but also managed to make the fill quite clean.  I especially like the entries NO-HOW, SEES RED, and EDGES UP.  The puzzle does have its share of crosswordese (EVOE, RUGA, ORRA, TANO, etc.).  Nevertheless, this is a very creative and clever pre-Shortzian puzzle!  The answer grid (with highlighted theme entries) can be seen below: 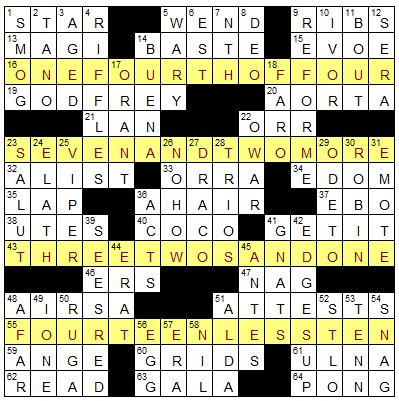 Today's featured pre-Shortzian entry, HAMMERFEST, originally appeared in the April 8, 1972, crossword (constructor unknown), which was recently litzed by Todd McClary.  According to the Ginsberg database, HAMMERFEST has never been reused in a Shortz-era puzzle.  The original clue for HAMMERFEST was "Europe's northernmost city."  Merriam-Webster gives a much more detailed description of the town:

Northernmost town in Europe (pop., 2007: 9,391), on the island of Kvaløya, northwestern Norway. It was chartered in 1789, but most of it was destroyed by fire in 1891. Norway's first municipal hydroelectric station was built with its reconstruction. Germans occupied the town (1940–44); on their withdrawal, they blew up the installations and evacuated the population. The town has since been rebuilt. Despite its latitude, its harbour is ice-free year-round because of the warming North Atlantic Current. The sun shines continuously between May 17 and July 29, and there is no sunlight from November 21 to January 21. Tourism and fish-oil processing are important economically.

Even though Hammerfest isn't the most well-known Norwegian town, it sounds awesome and looks beautiful!  Below is a panoramic picture of Hammerfest:

Posted by David Steinberg at 9:51 PM