The second litzing contest is now over, and I'm thrilled to report that we not only litzed 2,127 more puzzles in just two months, bringing us to 8,325 puzzles total, but we also passed the halfway point!  Awesome job, everyone—we're over the hump!

I'm also delighted to announce the contest's winners, with the number of puzzles they litzed in parentheses:

1.  Mark Diehl (625), who persevered to an amazing victory of man over machine!
2.  Howard Barkin (503), who has perfected the art of using OCR for litzing!
3.  Jeffrey Krasnick (204), who kept going despite needing to prepare for next week's ACPT!
4.  Barry Haldiman (32), who started it all and, appropriately enough, won the random drawing!

To see all the contest totals, click on the Contest Totals tab above.

Thanks so much again to Jim Horne, who provided year-long XWord Info subscriptions (or renewals) to the winners, and to Roy Leban, who gave Puzzazz e-books!

Howard Barkin, who performed prodigiously in this litzing contest, is the March Litzer of the Month!  To read more about Howard, click on the Meet the Litzers tab above or his photo in the righthand column.

I'm now sending out puzzles from 1971 to be litzed, and since we're approaching the legendary Sixties, I thought I'd start posting representative photos from the years we're in as we work our way backwards in time.  The photos will remind us of the times in which the pre-Shortzian constructors were building their puzzles!  Appropriately, the photo below is of the Intel 4004, the world's first commercially available single-chip microprocessor, which was introduced in November 1971:


Last week's poll asked whether you'd already known about Crossword Compiler's Insert Character window.  Apparently most people did:  66% said yes, and 33% said no.  Still, that's a sizable minority of constructors (including me!) who weren't familiar with this very useful feature.  In my post, I also asked readers to send in any other Crossword Compiler tips, and a couple of people did.

The insert character page shortcut (ctrl-S) doesn't seem to work from
the Review/edit clues page, which is where I do my clue entry Litzing.
It does work from within the Edit clue page (as shown in your post).
I can move from the Review/edit page to the Edit page by hitting
Enter, but I find it is easier (for me) to enter the ALT code for
umlauts, etc., from within Review/edit.

I tried this, and when you do it, you get a whole menu of useful options, such as Character Map..., Insert Symbol, and Insert Character.  Thanks so much for these Crossword Compiler shortcuts, Mark and Barry!

Today's featured puzzle, "Literal Approach," was constructed by Bill Hartman.  According to my (still incomplete) records, Bill Hartman constructed just two pre-Shortzian puzzles, both of which were very high quality Sundays.  I'm featuring my favorite of the two.

The puzzle was originally published on September 21, 1975, and was recently litzed by Denny Baker.  This is definitely one of the most imaginative, innovative pre-Shortzian puzzles I've seen.  It features eight symmetrically interlocking theme entries that must be interpreted literally from their clues or placement in the grid.  For example, THE MEDIUM IS THE MESSAGE (clued as "Observation on the ad era") is placed across the center of the puzzle.  Some of my other favorites include "(Sic)" (leading to CLUELESS ENTRY) and FOURTH DOWN (clued as "Last chance for the Jets" and literally placed at 4-Down).  What makes this puzzle particularly ahead of its time, however, is 64-Down.  The clue "Conspicuous" leads to the entry LIKE A SORE THUMB—this entry actually extends a square below the grid, so it literally sticks out like a sore thumb.  Wow!

Admittedly, PAINTED COLUMN, which is simply a vertical entry, isn't quite as strong as the other theme entries, and HUNDRED TEN ACROSS would be much better as ONE HUNDRED TEN ACROSS (or even A HUNDRED TEN ACROSS).  Nevertheless, the theme is exceptionally clever!  The nonthematic fill looks pretty nice as well—I especially like the entries AMBASSADOR, LEAD ASTRAY, and SHOWBOAT!  In the "meh" category, the first handful of Across entries alone includes FABA ("Bean, to Vergil"),  HADE ("Rock-vein angle"), TULE ("Bulrush"), LNG ("Coat part: Abbr."), and OXA ("Chem. prefix").  All in all, this is a phenomenal pre-Shortzian puzzle!  The answer grid (with highlighted theme entries) can be seen below: 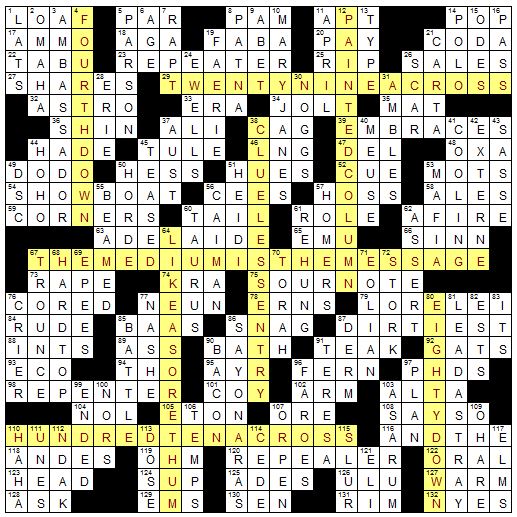 From hippies to rock and roll, the 1970s were known for being a drug-filled time.  So far I've come across two drug-related entries/clues in Will Weng–edited crosswords.  In the June 3, 1975, puzzle, which was constructed by Butler (first name unknown) and litzed by Jeffrey Krasnick, the entry MARIJUANA was clued as "Hemp with a wallop."  In the September 26, 1974, puzzle, which was constructed by Anthony B. Canning and litzed by Howard Barkin, the entry WEEDHEAD was clued as "Pot addict, familiarly."  I'm surprised that Weng was willing to push the envelope so much—I'm guessing Maleska never would have allowed these entries!  Below is a picture of the more legal type of weed.

Posted by David Steinberg at 8:07 PM