I'm happy to announce that the Pre-Shortzian Puzzle Project is now on Twitter!  To see the project's page, click on the icon in the righthand column.  For those of you on Twitter, this could be a good way to let others interested in the pre-Shortzian puzzles know about any observations you have or noteworthy entries or clues you come across.

This week's post is earlier and shorter than usual since I'm going to be at the ACPT over the weekend!  I'm looking forward to meeting (or reuniting) with litzers and fans of the Pre-Shortzian Puzzle Project.  While there, I'll be making a brief speech about the project, and flyers with one of the most brilliant pre-Shortzian puzzles I've seen so far will be distributed!

Today's featured puzzle, whose constructor is unknown, was originally published on March 15, 1973, and was recently litzed by Howard Barkin.  At first I assumed this puzzle was themeless—I've noticed that an increasing number of daily puzzles are themeless as we litz further back in the Weng era.  Once I looked more closely, however, I realized that the puzzle had a subtle, elegant theme.  Three other anagrams of 1-Across, 5-Across, and 1-Down are placed symmetrically around the grid.  It's amazing how the anagrams of 1-Across and 1-Down, which are all common words, intersect perfectly in every corner!  Also, the nonthematic fill is impressive, considering how many theme entries the constructor crammed into the grid.  I especially like the entries AIRSTRIP, POWERFUL, and LETDOWNS.  I've never heard of a SWEETSOP (clued as "Sugar apple"), but it looks pretty cool in the grid!  In sum, this is a solid pre-Shortzian puzzle with a simple, clever theme.  I've started to look much more carefully for themes so I don't miss any other gems like this puzzle!  The answer grid (with highlighted theme entries) can be seen below: 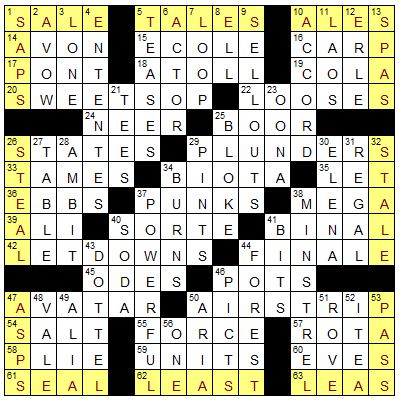 Today's featured pre-Shortzian entry is ELEEMOSYNARY.  ELEEMOSYNARY was originally used in the January 11, 1972, puzzle (constructor unknown), which was recently litzed by Howard Barkin.  Not surprisingly, the Ginsberg clue database shows that ELEEMOSYNARY has never been reused in a Shortz-era puzzle.  The original clue for ELEEMOSYNARY was "Charitable"; Webster defines eleemosynary as "of, related to, or supported by charity."  This bizarre word came from the late Latin eleemosyna  (from which the word alms is derived) and was first introduced into our language in 1616.  Below is a picture of the cover of Michael Sharp's and Patrick Blindauer's eleemosynary The American Red Crossword Book, which is dedicated to the victims of Hurricane Sandy and contains an introduction by Will Shortz. 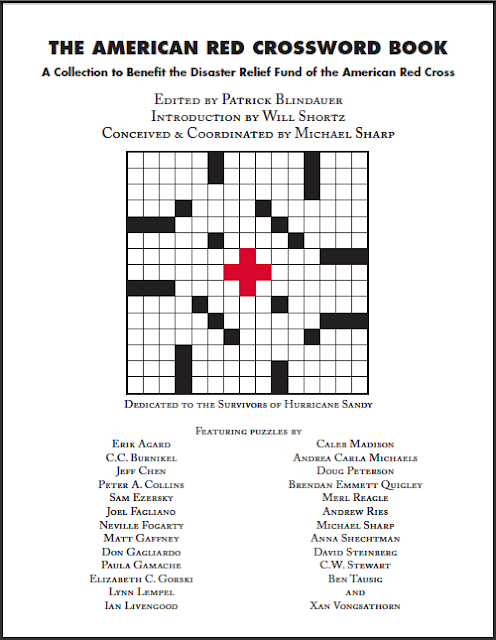 Posted by David Steinberg at 8:37 PM