Miriam Raphael's Maleska Stories, Helene Hovanec's "Creative Cruciverbalists," May Litzer of the Month Vic Fleming, Herbert L. Risteen Article, Another Litzing Script, Over 9,300—and in 1968 and the Farrar Era!

Several weeks ago I received an e-mail from master solver and crossword editor Miriam (Mimi) Raphael (whose National Puzzlers' League nom is Ditto).  Mimi won first place in the American Crossword Puzzle Tournament in 1979 and first place in the Seniors Division 18 times between 1988 and 2011.  She had some Maleska stories she thought I might be interested in—and I was!  With her permission, they appear below, followed by a photo of the Fairfield County Puzzlers:


Back in the 1980s and '90s, there was a group of puzzle people—Will Shortz and a number of constructors and others interested in crosswords—in this area that called themselves the Fairfield County Puzzlers, after Fairfield County, Connecticut, where most of them lived.  I was actually just across the border in Westchester, New York, but I was a member, anyway.  Will Shortz was our leader—he was not puzzle editor of The New York Times in those days.  Norton Rhoades, who had been a school principal in Stamford, Connecticut, was a member, as was Stephanie Spadaccini, Maura Jacobson, and a few others whose names you might be familiar with.

We met every other month, as I remember, and one time decided to have a Maleska Roast (to which he was not invited).  Everyone was encouraged to bring a nasty letter they had received from Eugene.  I had one.  Through a strange combination of circumstances, I was editing a series of puzzle books—Champion Crosswords, for Simon & Schuster.  There were eight books published in the series before it died.  When Margaret Farrar found out about it, she was very helpful.  One of the best pieces of advice she gave me was to be gentle with constructors when I had to refuse their puzzles.  This was their "baby," she reminded me, and they sent it to me with many hopes and misgivings.  I took her advice seriously and once even received a thank-you note for a letter I had written to a constructor explaining why I couldn't use her puzzle—it wasn't very good, but I didn't say that in so many words.

Maleska, on the other hand, returned Maura Jacobson's early effort with, "You have a long way to go before you're ready to submit to the NY Times."  I received a letter from Maleska saying, "It has come to my attention that you are editing Crossword Puzzle Books for Simon & Schuster.  What are your credentials to be a crossword puzzle editor?"  I responded (and this was my letter in full) that "my credentials were sufficient for my publisher to offer me a contract," and I didn't hear from him again.

Just about everyone at that Fairfield County Puzzlers meeting at my house had a similar nasty letter from the great Eugene M.  We had a great time!

Thanks so much, Mimi!  (And thanks, too, to Will Shortz and Stan Newman for helping to identify some of the people in the photo!  If anyone else knows who the remaining "Unknowns" are, please contact me.)

Coincidentally, I've been reading a wonderful book I recently found out about that offers a few quite different impressions of Maleska.  Helene Hovanec's Creative Cruciverbalists contains fascinating profiles of many pre-Shortzian constructors, and the one for Karen Hodge notes that "Hodge submitted several puzzles to Maleska, who although rejecting them, kept on encouraging her for he felt that she showed a flair for constructing."  When he finally accepted one of Hodge's puzzles, Hovanec writes:  "His congratulatory note, which elated her, began:  'Your avian opus is certainly not for the birds.'"

Similarly, the profile of Henry Hook shows another side of Maleska, who was so impressed with Hook's initial submission that he offered "to critique his crosswords and send him a style sheet (which Hook hadn't known existed)."  In fact, Hovanec writes, as "Hook developed under Maleska's tutelage, Maleska further assisted him by sending his work to other editors."

And the profile of Maleska himself is truly amazing.  Maleska's own puzzles did not meet with immediate acceptance.  His first efforts, which he sent to the Herald Tribune, were repeatedly rejected:


Maleska remembers the route he traveled:  "First I bought the newspaper every day and studied the style of the puzzle very carefully.  Months later I submitted my first professional effort—and held my breath.  I had enclosed a self-addressed stamped envelope, but did not bother to write an accompanying letter.  I had too much amour propre to plead.  My bubble of self-esteem burst abruptly.  Not even a formal rejection slip!  I was tempted to give up right then and there.  But persistence emerged to take the place of pride. . . .  I set some sort of record for initial failure—over forty rejections from a silent editor in a two-year period!"

Even more surprising to me was learning that Maleska actually tried to "jazz up" the clues in his puzzles:


He vividly remembers the first puzzle in which he "broke the log jam."  "'Nest' was defined as 'Nutcracker's suite' and the clue for 'noon' was 'When both hands are up.'  For 'ironer' the solvers were confronted with 'He has pressing problems.'"

And the first stepquote Maleska published, under Margaret Farrar, created a furor, with very polarized reactions on the parts of solvers.

Maleska seems to have been someone with many different sides—he could be arrogant and harsh with some constructors but was also apparently very encouraging to others.  And although the "educational" aspect to his puzzles could be stifling, some of his innovations, such as with cluing and stepquotes, were very creative.

Also, I was thrilled to get an e-mail from litzer and proofreader Todd Gross on Wednesday about an article he'd found on pre-Shortzian constructor Herbert L. Risteen.  Todd had been reading the interview with Litzer of the Month Vic Fleming, who mentions the entry VIC SEIXAS, and remembered that he'd seen Vic Seixas mentioned in an article he'd read about Risteen.  I've now linked to this article from the Pre-Shortzian Constructors page; to read it, click on the link there or go directly to the Risteen article here.  Thanks so much, Todd!  If anyone else comes across articles on pre-Shortzian constructors, please let me know.


Last week I wrote about the litzing script Martin Herbach had sent me, and today I just received some additional information from him::

fyi, the following one-line sed script merges any line that doesn't begin with a number, with its previous line:

It took a bit of messing with before I got it working.  It's for gnu sed on windows.  Other sed versions will take some syntax  changes.  I'm not an osx expert, so I have no idea what sed is built-in or available.

As you can tell, I hate doing something manually that can be automated.  I run it right after the ocr.

It's been a very busy week on the litzing front, with some huge puzzle shipments!  On Sunday, Mark Diehl sent in 21 puzzles; Jeffrey Krasnick, 7; and Todd McClary, 7.  The next day, Mike Buckley sent in 6, and then on Wednesday, Martin Herbach sent in five batches totaling 33 puzzles.  Early today, Mark sent in 35 puzzles—putting us over 9,300 on the litzing thermometer!—and then three hours later, Martin sent in another five batches totaling 35 puzzles!  And on the proofreading front, Tracy Bennett, Todd Gross, and Kristena Bergen all sent in lots of proofread puzzles.  Thanks so much, everybody—awesome job!

One final piece of news:  We're now in the Margaret Farrar era, where we'll remain till the very end!  We're also now in 1968, a very eventful, dark time in history.  On the lighter side, here's a photo from the sketch comedy TV show Rowan & Martin's Laugh-In, which debuted on January 22, 1968:


Today's featured pre-Shortzian puzzle (constructor unknown) was edited by Will Weng, litzed by Mark Diehl, and originally published on August 11, 1972.  It features a mind-blowing 11 symmetrically interlocking theme entries . . . based on the entry NUDIST CAMP!  The theme clues are a riot—here are a few of the wackier ones:  NUDIST CAMP [15 Across] (clued as "Mosquito heaven"), NUDES PAPER ("House organ of 15 Across?"), RAW DEAL ("Poker round at 15 Across"), CLOTHES ("Eyesores at 15 Across"), GAZA STRIP ("Locale of 15 Across?"), and BARE HANDS ("The help, at 15 Across").  This puzzle exemplifies Weng's sense of humor and willingness to publish surprising, bizarre-but-awesome themes!  Unfortunately, we don't have the constructor for this outré masterpiece; however, based on all the authored Weng puzzles I've seen, I'm guessing this puzzle was by master cruciverbalist A. J. Santora.  A. J. Santora was known for his ability to fit an incredible amount of theme entries into a daily-sized grid.

Regardless of who the constructor was, he or she did a great job filling around the 11 theme entries, and I noticed that even the ordinary clues feel a bit more playful than normal.  Some of the more interesting nonthematic entries include I'M GAME, the combination of CAESAR and CESAR, and the combination of DARNS and DAMNED; interesting nonthematic clues include "Taffy event" for PULL and "Wields a needle" for DARNS.  There are some clues and entries that elicited a "Sound of anguish" (GROAN) from me:  BLS ("Beer containers: Abbr."), ORDU ("Turkish army corps"), IRAK (Baghdad's land: Var."), APAR ("Armadillo"), PLUVIAL ("Showery"), SMUT clued as "Plant disease," BRUH ("Macaque of East Indies"), ASEM ("Old gold alloy"), and ACCA ("Old silk brocade").  Nevertheless, this is a brilliant and fun pre-Shortzian puzzle!  The answer grid (with highlighted theme entries) can be seen below: 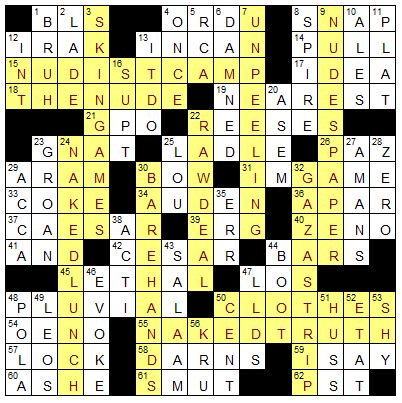 Today's featured pre-Shortzian clue is almost as risqué as the featured puzzle!  It originally appeared in the March 27, 1976, puzzle by H. Hastings Reddall, which was edited by Will Weng and litzed by Nancy Kavanaugh.  The clue for TOPLESS read "Like some waitresses."  This clue feels slightly off-color—I'm pretty sure that, of all the pre-Shortzian editors, Will Weng would've been the only one to allow it!  I can see that Maleska used much less suggestive clues for this entry ("Extremely high" and "' . . . ___ towers of Ilium': Marlowe."  Below is a picture of the seemingly topless Mt. Everest:

Posted by David Steinberg at 6:17 PM