Happy New Year!  It's been a great year for the Pre-Shortzian Puzzle Project, and to celebrate, I've put a special New Year's vocabulary test treat at the end of this post!

You may have noticed that we have a new litzing thermometer image.  On Monday the thermometer wasn't showing up on the site—this has happened before but has always resolved itself.  Early Tuesday morning, however, litzer Jeffrey Krasnick told me the thermometer still wasn't there.  Since it hadn't appeared when I checked again several hours later, I went to the thermometer's site, where I discovered that our original image had been replaced by new options, so I chose one of those.  R.I.P., old thermometer.

In other news, the project received some more publicity yesterday on PuzzleNation—click here and scroll about halfway down the page to see it.  Thanks, PuzzleNation!

Some of you may have seen my recent post on Cruciverb-l asking for help in identifying the genders and full names of some pre-Shortzian constructors.  A few people have responded, which has been very helpful, but there are still many unidentified constructors left.  I've listed the remaining names, with the range of years in which the constructors published in the Times, below—I'm particularly interested in identifying the genders of C. J. Angio, Dale O. Burgener, W. E. Jones, S. A. Kay, J. F. Kelly, and Patterson Pepple.  If you have any information on these constructors or any of the others in this list, please e-mail me (click on the Contact tab above for the address)—thanks! 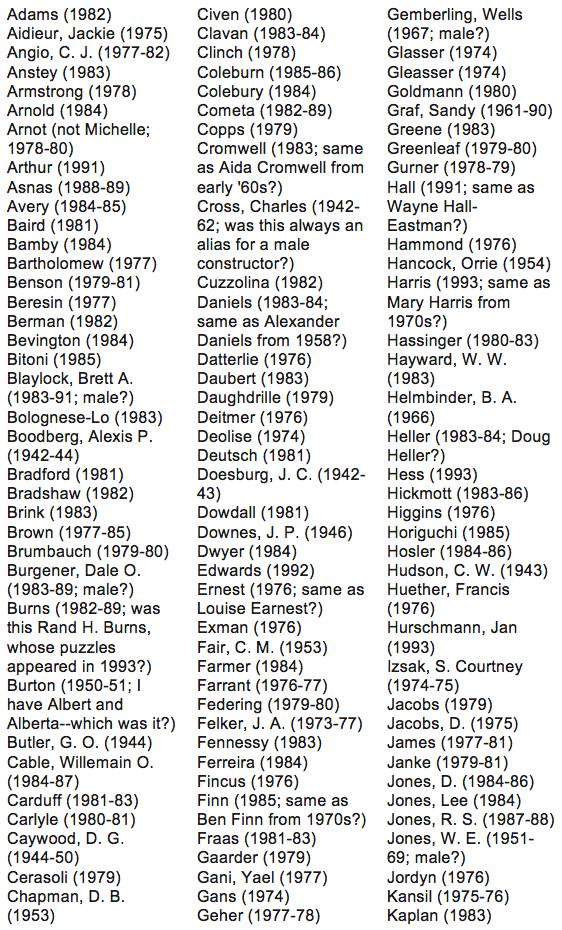 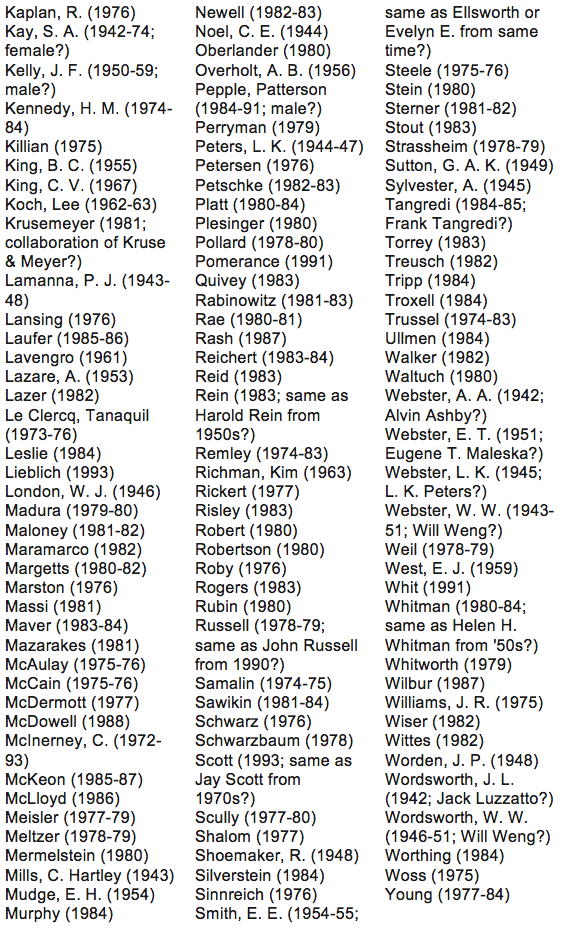 I was looking through my list of crosswords to feature on this blog and discovered that I had marked down three puzzles containing symmetrically interlocking 15-letter foods!  All three puzzles contain amazing theme density and interlock for their time, especially given that the constructors didn't have access to computer software to find 15-letter food names with three letters in particular positions.  Also, I find it fascinating that all three puzzles contained PEACH PIE A LA MODE—its letters must have lent themselves well to crossing!  Unfortunately, though, the constructors of these mouth-watering masterpieces are all unknown.

The first puzzle chronologically was published February 9, 1968; edited by Margaret Farrar; and litzed by Joe Cabrera.  This puzzle's constructor focused mostly on desserts, though he/she did mix CHICKEN CHOW MEIN and CREAMED POTATOES into this sapid omnium-gatherum for variety.  The puzzle is beautifully executed—the constructor even managed to toss a bunch of food-related entries into the surrounding fill, including SALADS, TOM (clued as "Kind of turkey."), BLE ("Wheat: Fr."), SHOOTS, DANE ("Maker of pastry."), MESAS ("Tables: Sp."), ROES, BULB ("Onion, for one."), DROP ("Piece of candy."), and SPUD.  Wow—that's a mouthful!  My only quibble with the theme is that two of the 15-letter theme entries contain the word PIE, but in all honesty, my complaint is trifling.  The answer grid (with highlighted 15-letter theme entries) can be seen below: 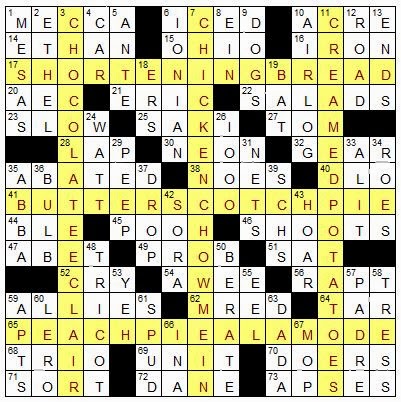 The second puzzle was published June 1, 1970; edited by Will Weng; and litzed by Mark Diehl.  This puzzle has a more even distribution of flavors than the first one did, though in exchange, there's one less 15-letter theme entry.  Removing a central theme entry also allowed the constructor to add some sparkle to the nonthematic fill—I particularly liked the entries CHARYBDIS and OBJET D'ART, though I also appreciated seeing the Latin-derived word PRESIDIAL ("Having a garrison").  As in the first puzzle, the surrounding fill also contains an extensive assortment of food-related entries, which include PEAS, IRISH ("Kind of stew or coffee"), PIT ("Prepare fruit"), CHEWS ("Works on caramels"), and PEARS.  I could complain about leftover PEACH PIE A LA MODE and CREAMED POTATOES, but these foods are so delicious that the repetition doesn't bother me very much.  The contrived plural SPCAS and the partial TÊTE A ("___ tête") did give me mild indigestion, but the rest of the fill was nice and smooth.  The answer grid (with highlighted 15-letter theme entries) can be seen below: 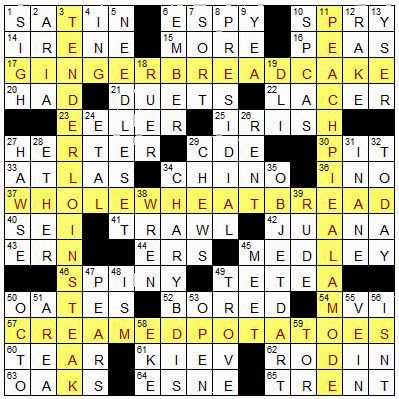 The third puzzle was published December 28, 1971; edited by Will Weng, who has shown himself to be quite the gourmand; and litzed by Howard Barkin.  This puzzle, which contains just 28 blocks, boasts a more impressive grid than did either of its predecessors.  The constructor also included some fresh fruit (WILD BLUEBERRIES) to complement the high-calorie foods elsewhere in the grid!  The theme as a whole, however, feels slightly less consistent than in the previous two puzzles—I was disappointed that FEAST OF LANTERNS was inedible, and ROAST LOIN OF PORK sounds a bit roll-your-own (or should I say PARKERHOUSE ROLL your own?).  In addition, I was dismayed to find just two other food-related entries in the surrounding fill:  LOTUS and HUSKED.  I was so impressed by the 28-block grid and mind-blowing theme entry interlock, though, that I couldn't help enjoying this one!  Here's the answer grid (with highlighted theme entries) for this puzzle: 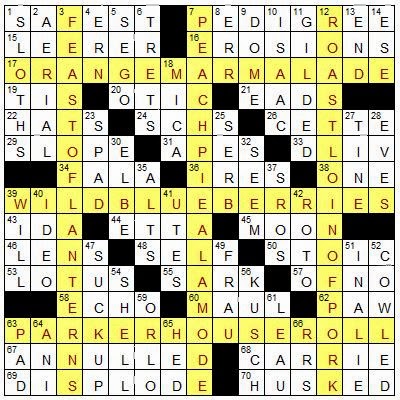 After such a lovely feast of words, what could be more refreshing than testing your vocabulary on some of the most bizarre words I've encountered in pre-Shortzian puzzles?  I've prepared a fun 10-question multiple choice quiz modeled after the vocabulary tests in Eugene T. Maleska's A Pleasure in Words.  Each question is an unusual entry that appeared in a pre-Shortzian puzzle; the correct answer choice is the original clue (and accurate definition), while the other three are made-up distractor clues.  I left the puzzle dates and authors off of each entry to make the quiz more challenging for litzers who may have encountered these entries.  Answers are below.  Please feel free to post your scores as comments!
To fill the spoiler space, here's a picture of A Pleasure in Words: 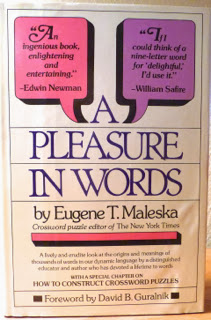