Last Saturday, I received an e-mail from litzer Howard Barkin.  He had read an article about Bernice Gordon in which she was quoted as saying she vaguely remembered her first New York Times puzzle having MAMIE EISENHOWER as an entry.  Howard had come across that puzzle—which was published on February 19, 1953—in a batch he was litzing, and he wondered whether it was indeed her first.  I checked my (still incomplete) database, and sure enough, that puzzle was the first on record for Bernice in the Times!  I sent PDFs of the puzzle and solution to Bernice, and she happily confirmed that the puzzle was indeed her first for The New York Times.  She remembered how proud she'd been to finally break in and commented that the puzzle seemed "so simple" compared to the ones she constructs today.  Thanks so much again, Howard, for your discovery!  Below is a picture of the puzzle's solution: 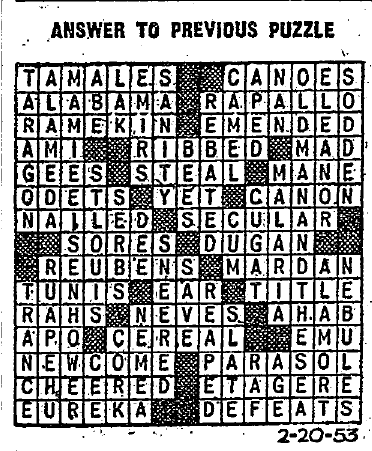 Tomorrow is February 1, and I'm delighted to announce that Alex Vratsanos is the new Litzer of the Month!  Alex is not only a prolific and exceptionally accurate litzer but also a young constructor who published his first puzzle in The New York Times on the day he graduated from high school!  To read more about Alex, click here or on the Litzer of the Month tab above.

It's been another busy litzing week, starting off on Saturday morning with 10 proofread puzzles from Todd Gross.  That afternoon, Alex Vratsanos sent in 7 more puzzles, which were followed by 7 from Mike Buckley that evening.  Sunday morning, Jeffrey Krasnick sent in 7 puzzles, which were followed a few hours later by 7 more from Lynn Feigenbaum, and then 7 more from Jeffrey (two batches in one day!) that evening.  Monday afternoon, Alex sent 7 more puzzles.  I woke up Tuesday morning to find 7 more puzzles from Lynn, 7 more from Jeffrey, and 7 from Barry Haldiman—a great start to the day!  That afternoon, Todd sent in 10 more proofread puzzles.  Wednesday night, Tracy Bennett sent in 31 more proofread puzzles.  Early Thursday morning, Jeffrey sent 7 more puzzles, then a few hours later, Lynn sent in 7 more.  Very early this morning, Todd sent 9 more proofread puzzles, which were followed by 7 litzed puzzles from Lynn this afternoon and 7 from Vic Fleming just a few minutes ago.  And this week, Howard Barkin sent in 14 puzzles.  We're now over 14,900—14,961, to be exact!  Thanks so much again, everybody!

I've been thinking about running another litzing contest, since we're so close to the end.  We're actually closer than the thermometer indicates, because between the newspaper strikes and ProQuest problems, quite a few puzzles are missing.  The thing is, we're going to be entering the Sunday-only period soon—that means the puzzles will be big (often 23x) and will take longer to litz.  We could try to shoot for finishing by March 7, the start of the ACPT, but that would be a very tough goal, and I know some of you will be busy training for the tournament.  What do you think?  If you have an opinion, use the poll gadget at the top of the righthand column to cast your vote! You can also e-mail me or leave comments below.

Today's featured puzzle, whose constructor is unknown, was originally published on November 3, 1964; litzed by Mark Diehl; and edited by Margaret Farrar.  This timely and historical crossword, which appeared on Election Day, 1964, features 10 mostly symmetric theme entries relating to the election or recent politics in general.  The constructor even went so far as to disguise some of the election/political names and terms in the clues!  My favorites of these not-so-obvious references include SENATOR (clued as "Member of a ball team."), KENNEDY ("Florida cape."), MILLERS ("Chaucer's 'The ___ Tale.'"), and JOHNSON ("Lexicographer of 1775.").  H TRUMAN ("Truncated signature of White House fame.") is a particularly weak theme entry, especially since HST is elsewhere in the puzzle, but the overall theme and sheer quantity of theme entries definitely outweigh this minor flaw!  And as with all current events–themed pre-Shortzian puzzles, I find it fascinating to see how crossword constructors of the '50s and '60s chose to define leading political figures of their day.  Aside from the theme, I find it amazing that the puzzle has just 70 words, which is lower than the word count of the vast majority of themeless puzzles from the same time period.  The constructor did a truly masterful job of balancing an ambitious theme and grid with a relatively clean nonthematic fill!  I particularly like the entries HUMPHREY, BADGER, DRAGS (with the fresh, fun clue "Auto races: Slang"), and YVONNE, though I also appreciated seeing the semi-thematic entry ORATORS with the old-fashioned political clue "Bryan and others.," especially since we just studied William Jennings Bryan in my AP U.S. History course.  We also learned about Henry Clay earlier this year, so I was pleased to encounter the clue "Last word of Henry Clay aphorism." for the theme entry PRESIDENT, even though I wasn't familiar with the aphorism the clue mentioned.  Apparently, after failing to become president, Clay famously remarked, "I would rather be right than president."  Anyway, on the flip side, the nonthematic fill does have some entries that feel quite esoteric, including SNATH ("Handle of a scythe."), ALCO ("Small dog of tropical America."), and TROMBE ("Organ stops imitating trumpet tones."), as well as a handful of unsavory abbreviations and foreign terms, most notably SPTS ("Certain cities: Abbr.") and COUPURE ("Cut: Fr.").  Nevertheless, I find this puzzle fascinating from both a historical and a cruciverbal perspective, and I hope to see more like it in previous election years.  For now, here's the answer grid (with highlighted theme entries): 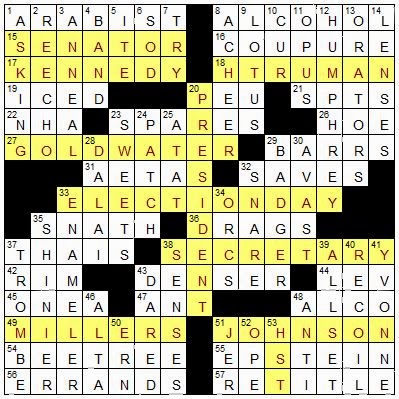 Pre-Shortzian New York Times crosswords are notorious for having very few (if any) references to contemporary pop culture.  In fact, one critic of Maleska went so far as to state that the most recent reference Maleska used in a crossword during his 1977–1993 editorship was Rosie the Riveter!  Contrary to this stereotype, I've seen many clues in pre-Shortzian puzzles that were quite fresh at the time.  Here are seven clues that date back to the Beatles' earliest years of fame in the United States, all of which come from puzzles litzed by Mark Diehl (and most of whose constructors are unknown).  These 1964 and 1965 clues were definitely contemporary!

My favorite of these clues is definitely the one for BALD—the Beatles were certainly hair apparent!  Here's a picture of this beloved hirsute band:

Posted by David Steinberg at 6:24 PM