I decided to publish this week's blog post today instead of yesterday because today legendary pre-Shortzian & Shortz-era constructor Bernice Gordon turns 100!  Happy 100th Birthday, Bernice—have a wonderful day & party!  Bernice has had the longest crossword-constructing career for The New York Times of any constructor—more than 60 years—&, amazingly, she still builds one crossword a day!  To read more about Bernice & her puzzle innovations, go to the excellent Bernice Gordon Wikipedia page, which contains many links to articles about her, or click on the Pre-Shortzian Constructor Interviews & Pre-Shortzian Constructors tabs above.  & be sure to check out this week's featured puzzle below & her ampers& puzzle featured previously on this blog.

With all this litzing, we're now sending out puzzles from 1953.  Although 1953 had many notable events, one in particular stood out for me:  the first successful ascent of Mount Everest on May 29, by Sir Edmund Hillary and Tenzing Norgay.  At 8,848 m, Mount Everest is Earth's highest mountain, and scaling this 8,848 m peak is in some ways like conquering our mountain of 16,225 pre-Shortzian puzzles!  Both involve team efforts to reach very difficult goals, and like Sir Edmund Hillary and Tenzing Norgay, we will eventually reach our summit!  Here is a picture of Mount Everest:

The one notable exception was C. J. Angio, whose name may actually have been a pseudonym.  Several people suggested that C. J. Angio was most likely female, because women were more likely than men to use initials instead of their names.  Unfortunately, this was not always the case among the pre-Shortzian constructors—quite a few prolific male constructors, such as A. J. Santora and W. E. Jones, used their initials too.  I was able to determine that C. J. Angio lived in Illinois, but despite extensive searching, I still couldn't find him or her.  If anyone has any more information about C. J. Angio, please contact me.

Today's featured puzzle was constructed by . . . Bernice Gordon!  Although Bernice is best known for bending the rules of crossword construction in her innovative rebus puzzles, she's come up with many other twisty, forward-thinking, and creative themes.  This week's highlighted puzzle, for example, features four entries that read up and backwards!  The puzzle, which was edited by Eugene T. Maleska, originally appeared on  January 27, 1989, and was litzed by Mark Diehl.  Each theme entry that reads in the opposite direction literally contains the word UP or BACK, which adds a nice level of consistency to the already clever gimmick.  As a bonus, both of the BACK entries reference mirrors and looking glasses in their clues!  The nonthematic fill has many nice entries, including BADGERS, ALIASES, IP CRESS, DOCENT, and DAKOTAN.  Bernice also included some cranium-crushing words I've never heard of, including TANAGRA (clued as "Scene of a Spanish victory: 457 B.C."), ARUNDEL ("Site of a magnificent English castle"), NESIOTE ("Inhabiting an island"), and SERINGA ("Source of Pará rubber").  Nesiote is such an unusual word that it doesn't appear in Merriam-Webster, though my favorite of these entries has to be ARUNDEL.  Here's a picture of the truly magnificent castle:

Arundel Castle looks spectacular, though in my opinion, it doesn't quite surpass the attractiveness of symmetrical black and white squares!  So for all you fellow cruciverbalists, here's a picture of Bernice's puzzle with highlighted theme entries, which can also be viewed on XWord Info without highlighted theme entries.  Happy Birthday again, Bernice! 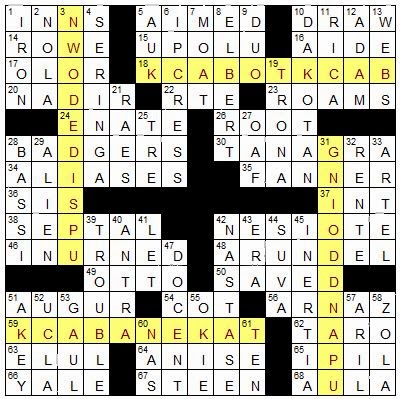 Posted by David Steinberg at 5:29 AM