It's been another busy week—we're not only over 14,800 but also, at 14,856, more than halfway to 14,900!  The first puzzles for this week—7 from John Bulten—actually came in Friday morning but didn't get logged in till later.  Early Saturday morning, Lynn Feigenbaum sent in 7 puzzles, then that afternoon, Todd Gross sent 11 proofread puzzles.  Early Monday morning, Jeffrey Krasnick sent in 7 more puzzles, and later that morning, Denny Baker sent 3 more.  Early Tuesday morning, Lynn sent in 7 more puzzles, which were followed by 7 more from Jeffrey half an hour later and another 7 from Barry Haldiman a few hours after that.  Wednesday evening, Denny sent 7 more puzzles, which were followed by 25 more from Ralph Bunker.  Early Thursday morning, Jeffrey sent 7 more puzzles, putting us at 14,800 on the litzing thermometer!  Shortly before noon, Barry sent in another 7, then that afternoon, Nancy Kavanaugh sent in a mega-batch of 42 puzzles, which were followed by 7 more from Lynn less than half an hour later!  Awesome job, everybody—maybe we'll even make it to 15,000 this coming week!

We're also now in 1952, and I'm especially delighted to present this representative photo from that year—the first issue of Mad magazine!  Mad originally appeared as comic book before becoming a magazine; here's a picture of the first issue:

My list of puzzles to feature on this blog is now 46 pages long, and it grows by the day as litzers continue to send in so many puzzles at such a rapid clip!  For today's featured puzzle, I decided to scroll all the way up to page 16, which contains some of the puzzles I found most interesting from 1975 and 1976.  This crossword, which was constructed by George Madrid, was originally published March 26, 1976; edited by Will Weng; and litzed by Nancy Kavanaugh.  Since I've seen so many pre-Shortzian puzzles, I wasn't sure what to expect when I reopened this puzzle's Crossword Compiler file; I did have some idea, though, as I had jotted down that it was a "good representation of Weng's style."  Looking back on this crossword nearly a year later, I completely agree with my original description—this puzzle screams Weng to me!  The puzzle contains a wacky, not-quite-symmetric quote (described as a gourmand's cop-out in the clues) about burping:  TIS BETTER TO BURP AND BEAR THE SHAME THAN NOT TO BURP AND BEAR THE PAIN.  This is definitely one of the most amusing quotes I've seen in a crossword puzzle, pre-Shortzian or Shortz-era!  I wonder if the constructor intended TORMENT (clued as "Pain," which also appears in the quote) and EAT CROW ("Suffer humiliation") to be part of the theme by a stretch—the former in particular feels like it should be part of the theme, since its symmetrical counterpart is part of the quote (BURP AND).  Either way, the theme is fun and enjoyable!  The nonthematic fill, however, feels rather sketchy in places—I can't imagine any of Weng's successors (or his predecessor) allowing the entry USED AIR GUN ("Child's offering for a swap")!  Other entries that feel a bit iffy include the partials WHO ARE ("'We ___ about to die . . . '") and IT'S UP TO ("'___ you' (your option)") and the not-so-great plurals EASYS ("Chair and Street") [yikes!], AAAS ("Shoe widths"), and NNES ("Compass points").  On the flip side, PAID UP, ARCANE, LENORE, ROBBERY, and SNATCH are quite nice.  The most intriguing entry to me, though, is HELEN TRENT ("Radio soap-opera heroine"), an older reference I wasn't familiar with.  After a quick Google search, I discovered that Helen Trent was the protagonist in the 1933–60 CBS radio soap opera The Romance of Helen Trent, which ran for more than 7,222 episodes.  Helen was a 35-year-old dressmaker who apparently had a number of male admirers (most notably Gil Whitney), none of whom she ended up marrying.  What an interesting reference!  The clues are also nice on the whole, particularly "Tin and rabbit" for EARS.  In all, this puzzle is a strong example of a pre-Shortzian quote theme and epitomizes Will Weng's style!  The answer grid (with the quote highlighted) can be seen below: 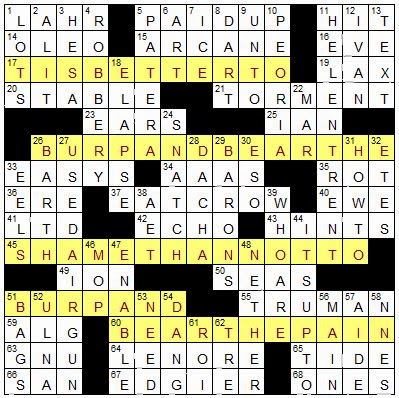 At 18 pages, my list of clues to feature is also mushrooming (pun intended) as litzers continue to send back Atomic Age puzzles!  I've seen a number of Farrar-era clues that reference "the good old days," which I always find particularly interesting, since they imply that the entry in question no longer existed in the mid- to late 1960s.  Here's an ennead of "good old days" clues.  I find it rather fitting (though sad) that none of these puzzles' constructors are known.

I find the TOMBOY and TOMBOYS clues most intriguing and objectionable, since there were plenty of tomboys in the '60s (including my mom!), and there are still a good number of them today.  I do think there's something to be said for there possibly being a decrease in tomboys over time, though, since society has become more and more celebrity- and fashion-obsessed as advertising proliferates and new ways to receive information continue to be invented.  Below is a picture of some more fashion-focused, "modern" girls—can't say I'm complaining ;) !

Posted by David Steinberg at 6:57 PM

Email ThisBlogThis!Share to TwitterShare to FacebookShare to Pinterest
Labels: George Madrid, Will Weng